The claxons have been ringing for decades, warning bells sounding off against sun exposure, as if each photon of solar energy was a barbarian at the gates. Dermatologists appear right before the weather report, warning of skin cancer and precancerous moles, dampening any joy that might be received from the prediction of a sunny day.

Americans have taken heed, wrapping themselves in the prescribed “loose, lightly colored clothing” and applying sunscreen ritualistically, as though the oily balms might ward off the evils of the great fire in the sky. These practices have led to a culture of avoidance, where soccer dads battle for prestige, by quoting the SPF factor of the lotion used to coat their children before they go out to play— but never between the hours of 10 a.m. and 3 p.m.

The practices of alarmist America would eventually march us underground, were it not for the voice of reason, the pleas of children and the fact that a decent tan looks so good. But by bronzing the skin, are we in effect slowly killing ourselves?

This is what we’re taught, from nearly every media source and with every doctor’s visit. Yet, while it’s true that excess sun exposure ages the skin and natural sunlight is considered a carcinogen, could it be that getting a little sun can actually be healthy for us? 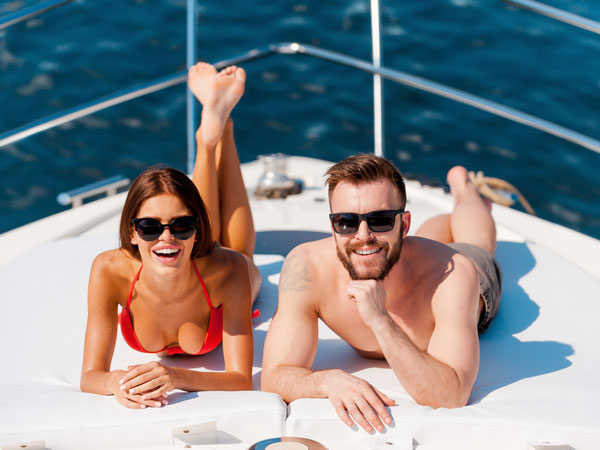 The confusion lies with the campaign waged by dermatologists against certain skin cancers. The skin is an organ, just like the liver and lungs. But unlike most other parts of the body, it’s in direct contact with the environment. This makes the skin very susceptible to being damaged. A simple glance at one’s skin reveals scars from lacerations, abrasions, thermal burns, chicken pox and a myriad of life’s experiences. The photons (little energy bundles representing one unit of light) from the sun also contact the skin. Due to their immense energy, certain wavelengths penetrate through several layers of the epidermis, particularly the ultraviolet waves. Ultraviolet radiation (UVR) is a portion of light not visible as color, emitted by the sun and tanning bed bulbs. When it strikes the skin, UVR can damage protein structures such as elastin, causing the skin to get an aged appearance of sun damage.1 UVR can also penetrate into the cell nucleus where the DNA resides.2 The DNA is capable of self-repair when damage is limited, but excessive damage either kills the cell or may mutate it into a cancer.

Malignant melanoma is a terrifying form of cancer. Though melanomas are often associated with sun exposure, the evidence is conflicting and melanomas have occurred in areas that normally don’t get sun exposure, such as the brain and rectum. Melanomas are discovered when a person finds a mole that changes shape, size or color.4-7 Darkly pigmented moles, with irregular borders that grow are highly suspicious and should be biopsied immediately. Melanomas can be fatal and the five-year survival rate for melanoma varies depending on how deeply into the skin the cancerous cells reach. Melanomas that are excised (cut out) and found to be very shallow have a good survival rate.8 However, melanomas that have spread throughout the body, called metastatic melanoma, have a much lower five-year survival rate of only 6 percent, meaning that 94 percent of people diagnosed with metastatic melanoma are dead inside of five years, many within a matter of months.9 It’s easy to see why screening for melanomas is such a critical issue.

So, if it’s clear that the sun causes or is associated with three different types of skin cancer, how is it even possible to suggest that a little sun can protect against cancer? Isn’t it medical heresy to suggest such a thing?

First, it’s important to realize that most skin damage from the sun occurs in childhood. Studies have shown that skin cancers are more closely related to sun damage occurring before age 18.10 Second, the damage occurs from overexposure. The skin reddens as damage builds; this is called erythema. The amount of sun necessary to redden the skin is known as the minimal erythematous dose (MED). The MED is different for everyone and is based on skin type, time of year, latitude (are you closer to the equator or the North Pole?) and base skin pigmentation. Generally, the MED ranges from approximately 10 minutes to a couple of hours, but this can differ based on the variables previously mentioned.11 It’s important that each time one gets in the sun, he doesn’t stay exposed past the point of MED. Otherwise, sunburn occurs and the amount of DNA being damaged in the skin reaches a point that places one at a higher risk for cancer.

Most people assume, correctly in this case, that they can tolerate more sun with a tan. Pigmented skin prolongs the MED time and protects against UVR. The trade-off is that it also takes longer to generate the same amount of vitamin D.12 Though it defies logic based on appearances, darker races actually have lower vitamin D, assuming the same degree of sun exposure occurs. Just as a tan protects against sunburns, it also blocks the sun’s energy from promoting vitamin D production. A tan is nature’s sunscreen.

Now, assuming sun exposure is occurring in adults and taking place in reasonable amounts (relative to MED), what evidence supports the claim that it could be protective against cancer?

There are many types of cancer, with the most common being skin, lung, colon, breast and prostate. Knowing sun overexposure is associated with skin cancer, researchers looked to see if there was any association between sun exposure and other cancers.

The first step in defining an association is whether there are patterns. Researchers looked to see if identifiable conditions, which lead to greater sun exposure, affected cancer rates or severity. They defined areas of high sun exposure as being in the Southern states and in areas with a greater number of sunny days. Individually, people with greater recreational or occupational sun exposure, or a history of sun-damaged skin were categorized as having high sun exposure.

After analyzing the data, the researchers discovered that people with greater sun exposure had a much lower risk of the most common forms of cancer. In fact, the degree of difference was nearly five-fold in some cases.13-19

These results have been replicated in many surveys, forcing the scientific community to find ways to explain this phenomenon. They realized that more sun exposure leads to higher vitamin D levels, the same lesson children learn in beginning nutrition classes, proving Occam’s razor to be true (the simplest answer is usually the best).20 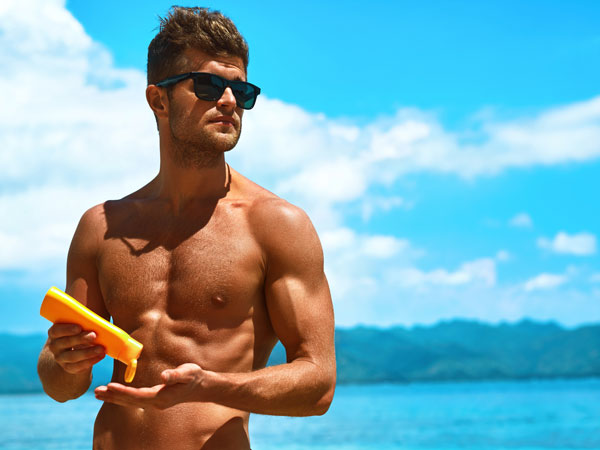 Vitamin D is formed in the body in a three-step process. First, the vitamin D prohormone— cholecalciferol, is generated in the skin under the stimulation of ultraviolet radiation (UVR or sunshine). Cholecalciferol is converted into the prohormone D2 in the liver. D2 travels throughout the body and is converted into the most active form, D3, in various tissues, the classic example being the kidneys.21 D3, also known as 1, 25-dihydroxycholecalciferol, is a steroid. Like testosterone, D3 interacts with receptors, traveling to the cell nucleus (where the DNA is), turning on or off certain genes.22

Though milk products and multivitamins are fortified with vitamin D, the U.S. population generally doesn’t receive optimal amounts of vitamin D in the diet, nor through sun exposure.23 Vitamin D is high in fatty fish and eggs, two staples of the Japanese diet, which may partly explain why that culture enjoys much higher vitamin D levels and lower rates of osteoporosis and certain cancers.24

Time and again, it’s been shown that people with lower vitamin D levels are more prone to the most common forms of cancer.25,26 However, the strongest relationship exists not between dietary vitamin D and cancer rates, but rather with sun exposure.16-18 It seems that the body, acting as a system, protects itself more effectively by generating its own vitamin D, rather than consuming it in food or as a supplement. It’s believed that 90 percent of vitamin D is generated through sun exposure, rather than through dietary intake.27

Accepting that the positive relationship between sun exposure and cancer protection was due to the generation of vitamin D, researchers then looked inside cancer cells to see what effect vitamin D has on the diseased cells. It should be noted that healthy cells of the breast, prostate and other tissues will generate active D3 from circulating D2. However, the cancerous cells were found to produce lower amounts of D3 and break down D3 to an inactive metabolite, preventing the vitamin-hormone from providing benefit.28,29 Elevating D3 levels in cancer cells through sun exposure or supplementation allows the vitamin-hormone to better affect the genes in the DNA, turning on protective genes and turning off harmful ones.

The cumulative effect of vitamin D in cancer cells takes place through a variety of different actions. The mechanisms by which vitamin D reduces the risk of cancer include: enhancing calcium absorption, differentiation— making the cancer more organized and less chaotic or prone to spread, increasing cancer cell apoptosis or death, reducing the growth and spread and reducing angiogenesis— shutting off the blood supply to the cancer.22,30

Vitamin D also protects against the tumor-promoting effects of IGF-1, a potent anabolic hormone, by inhibiting the enzymes that are triggered by IGF-1 stimulation and increasing the production of a protein that binds IGF-1 in the blood, reducing its stimulation of cancer cells.31 This multiple pathway approach is ideal as single mutations in a cancer won’t allow it to become resistant to the effects of vitamin D.

Through its myriad actions, vitamin D not only protects against the development of cancer, but may also hold promise in cancer treatment. Though it’s important to consume sufficient vitamin D in the diet, it appears that it’s even more critical to allow your own body to become its own vitamin D factory by exposing it to the sun. As overexposure to the sun is associated with the adverse conditions of skin cancers, it’s vital to monitor exposure and keep it within reasonable limits. Approximately 15 to 30 minutes of exposure during the peak hours in the summer, just long enough for a pleasant walk or to mow the lawn, is sufficient.32 During the winter, limited use of a tanning bed or dietary supplements may be helpful. Some experts recommend as much as 1,000 International Units (IU) of supplementary vitamin D daily during the winter months.33

It’s insane how sun averse Americans have become, only to learn that they were harming themselves more than helping by avoiding the sun. The benefits of a little sun don’t end with cancer protection. Other diseases are lessened in severity or occurrence by sun exposure, mood improves and many feel that a healthy tan is attractive. Practiced in moderation, sun exposure is relatively safe, natural and healthy. Best of all, it’s also free.