Americans are fat and getting fatter. Since 1960, the average American man’s weight has increased from 166 to 191 pounds, and the average American woman’s weight has increased from 140 to 164 pounds. The prevalence of obesity has increased from about 13 percent in 1960 to about 35 percent today. Nearly 68 percent of adult Americans are now overweight. In October 2012, the Trust for America’s Health and the Robert Wood Johnson Foundation reported that if present trends continue, obesity rates could exceed 44 percent within 20 years. States such as Mississippi and Oklahoma could top 65 percent by 2030.

The obesity epidemic is bad news for the American health care system. Legions of “baby-boomers” are retiring, which is putting an incredible strain on Medicare and national medical costs. Aging boomers are claiming an increasing percentage of our health care dollars. The obesity epidemic is making things worse. Obesity is causing a landslide of degenerative diseases in the American people— such as heart disease, diabetes, high blood pressure, cancer and arthritis— that is sucking the economy dry. Within a decade, obesity-related health care costs could increase by more than 10 to 20 percent. The annual cost of the obesity epidemic is 150 to 200 billion dollars per year. Obese people spend nearly twice as much on medical care as people with healthier weights. This is money that could be spent on education, defense, infrastructure or reducing the tax rate. Obesity is a national emergency that is more dangerous to our country than terrorism or nuclear proliferation.

Why are Americans so fat? Possible explanations include more time spent in sedentary work and less leisure-time activities, fewer short trips on foot and more by automobile, fewer daily gym classes for students, more meals eaten outside the home, greater consumption of fast food, increased portion sizes, and increased consumption of soft drinks and convenience foods. According to the U.S. Department of Agriculture, average calorie intake among Americans increased by more than 500 calories per day between 1970 and 2012. Further, the Centers for Disease Control and Prevention (CDC) says that nearly 40 percent of adult Americans are physically inactive and get no exercise at all. 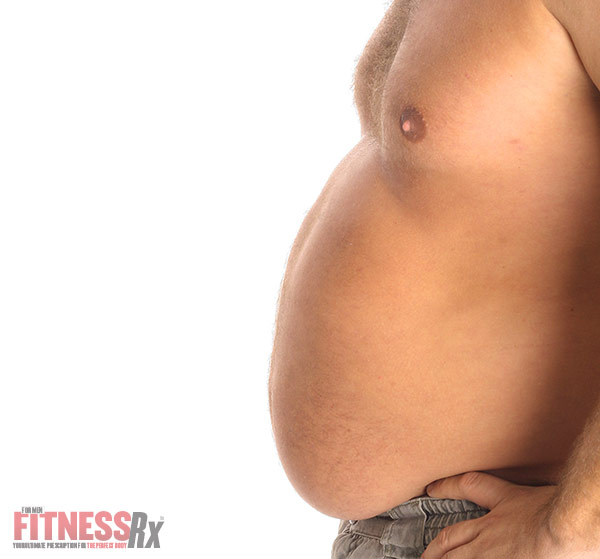 Many overweight and obese people— especially those who are sedentary and eat a poor diet— suffer from a group of symptoms called metabolic syndrome (or insulin resistance syndrome). Symptoms include a resistance to the effects of insulin, high blood pressure, high blood sugar levels, abnormal blood fat levels (high triglycerides and low HDLs, or “good” cholesterol), and fat deposits in the abdomen. Metabolic syndrome increases the risk of heart disease— more so in men than in women. Scientists estimate that nearly 35 percent of the adult U.S. population has metabolic syndrome.

Even mild to moderate obesity is associated with a substantial increase in the risk of type 2 diabetes. Obese people are more than three times as likely as nonobese people to develop type 2 diabetes, and the incidence of this disease among Americans has increased dramatically as the rate of obesity has climbed. About 24 million Americans (8 percent of the population) have one of two major forms of diabetes. About 5 to 10 percent of people with diabetes have the more serious form, known as type 1 diabetes. In this type of diabetes, the pancreas produces little or no insulin, so daily doses of insulin are required. (Without insulin, a person with type 1 diabetes can lapse into a coma.) Type 1 diabetes usually strikes before age 30.

The term pre-diabetes describes blood sugar levels that are higher than normal but not high enough for a diagnosis of full-blown diabetes. About 57 million Americans have pre-diabetes, and most people with the condition will develop type 2 diabetes unless they adopt preventive lifestyle measures. The major factors involved in the development of diabetes are age, obesity, physical inactivity, a family history of diabetes, and lifestyle. Excess body fat reduces cell sensitivity to insulin, and insulin resistance is usually a precursor of type 2 diabetes. Ethnicity also plays a role. According to the CDC, the rate of diagnosed diabetes cases is highest among Native Americans and Alaska Natives (16.5 percent), followed by blacks (11.8 percent), Hispanics (10.4 percent), Asian Americans (7.5 percent) and white Americans (6.6 percent). Across all races, about 25 percent of Americans age 60 and older have diabetes.

Ninety percent of cases of type 2 diabetes could be prevented if people led healthier lifestyles, including regular exercise, a moderate diet, and modest weight loss. For people with pre-diabetes, healthy lifestyle is more effective than prescription drugs for delaying or preventing the development of diabetes. Studies of people with pre-diabetes show that a 5 to 7 percent weight loss can lower diabetes onset by nearly 60 percent. Exercise (endurance and/or strength training) makes cells more sensitive to insulin and helps stabilize blood sugar levels; it also helps keep body fat at healthy levels.

Obesity is bad news. It makes you look and feel bad and it is sucking the economy dry. What can we as a nation do to stem the tide of creeping obesity? More important, what can you do to fight fat and win? 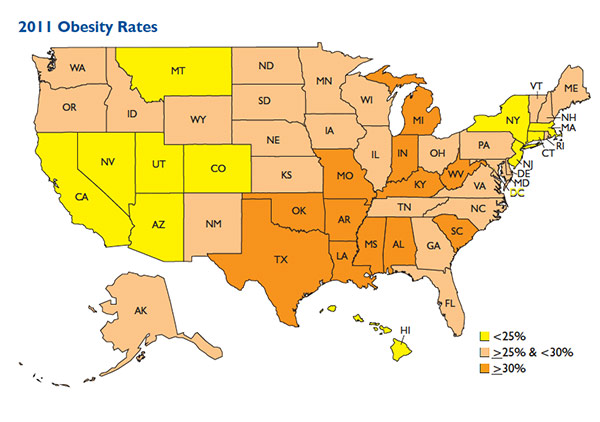 Obesity is a serious problem that affects 20 to 35 percent of the population in the United States, Mexico, Great Britain, Australia, New Zealand and Greece. Obesity rates are only 3 to 10 percent in Japan, Switzerland, France, Denmark, Italy and Sweden. Countries with less obesity are highly industrialized just like the United States. The U.S. spends more money per person ($5,274 per year) on health care than any other country, yet we are number one in obesity, 30th in life expectancy, and fifth in years living in ill health. We also have a high rate of deaths from heart disease and cancer. Throwing money at the problem is not the answer.

Health organizations such as the Centers for Disease Control and Prevention, the Trust for America’s Health, and the Robert Wood Johnson Foundation believe that government can help fight the obesity epidemic by increasing the availability and lowering the cost of healthy foods such as fruits and vegetables, providing incentives for healthy food distribution to poor urban areas, restrict the availability of unhealthy foods such as high-sugar soft drinks, increase physical education in schools, broaden access to physical activity in towns and cities, and improve attitudes toward healthy lifestyles.

Every ten years, the U.S. government sets health goals for the nation called Healthy People (i.e., Healthy People 2020, Healthy People 2010, etc.). Overall, the nation’s health improved between 2000 and 2010: fewer people smoked, blood cholesterol decreased, and life expectancy increased. However, trends in obesity and physical activity levels suggest that our nation’s health is in for a bumpy ride. Obesity rates increased from 23 percent of the population in 1988 to 35 percent in 2010. Fifty percent of people do not meet the minimum physical activity recommendations of 150 minutes per week of moderate intensity exercise. Ominously, physical activity levels in children and young adults decreased for both aerobic and strength exercises. Teens and young adults are getting fatter, are consuming more calories, and are doing less exercise.

Government programs might promote an atmosphere for healthy lifestyles but people must take personal responsibility for their health if they want to lose fat and improve in fitness.

The major causes of obesity include lack of exercise and diets high in calories, harmful fats and refined sugar diets. If you are too fat and have a big belly, here are several principles that will help you lose it:

• Limit your intake of saturated and trans fats. Do this by cutting down on processed foods and eating at fast food restaurants.
• Eat more meals at home. Eating at restaurants, particularly fast food restaurants, promotes overeating. When going to restaurants, don’t “supersize” your meals.
• Cut out high-sugar soft drinks. Switch to water or diet drinks.
• Limit alcohol consumption to two drinks a day. Alcohol is high in calories and contributes to abdominal obesity when consumed with high-calorie, fatty foods.
• Exercise at a moderate intensity for at least 30 minutes every day. Also, try to exercise intensely (above 50% of your maximum capacity) 3-5 days per week for 20 minutes or more.
• Increase fiber intake.
• Watch less TV. People who watch a lot of TV have fat guts. Substitute something more active.
• Lift weights. Combining weight training, aerobics, and a sensible diet is the best way to lose fat and shrink your waist size.

Consistency is the key. Long-term weight control depends on a caloric deficit of only 300 calories per day. That doesn’t sound like much, but people have a hard time sustaining it. The easiest way to achieve this is by making small changes in your lifestyle. For example, go for a walk or work out on an elliptical trainer for 30 minutes as soon as you get out of bed. You will burn at least 300 calories. Make this workout a vital part of your day. Eat an apple after your morning workout. Apples are high in fiber and help curb appetite. A short walk and an apple are small steps toward a thinner you. These small changes will not help you achieve the Biggest Loser award on TV, but they will help you lose weight.