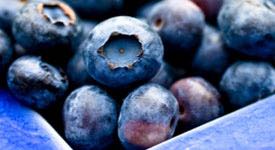 “Where did I put those car keys….I must be just getting old.” Everyone assumes that being forgetful is a normal part of aging, however its not. Aging is associated with a host of neurological disorders as Parkinson’s disease, Alzheimer’s disease; however, you may be able to prevent the age related decline in mental function by protecting your brain with blueberries. When people think of brain nutrients, most people think of Ginko Biloba and other herbs, yet these herbs might have competition as blueberries are rapidly being touted as being the “King of Brain Nutrients.” A recent study demonstrated that daily consumption of modest amounts of blueberries dramatically slows impairments in memory and motor coordination that normally accompany aging. So what makes blueberries so special compared to other fruits? After testing 24 varieties of fresh fruit, 23 vegetables, 16 herbs and spices, 10 different nuts, and 4 dried fruits, the US Department of Agriculture determined that blueberries scored highest overall in total antioxidant capacity per serving. As many health-conscious adults are aware by now, antioxidants are vital in countering free radicals, the harmful byproducts of cellular metabolism that can contribute to cancer and other age-related diseases. These bioflavonoids include anthocyanins and their precursor, proanthocyanidins, both of which are potent scavengers of free radicals.

When a cell convert’s oxygen into energy, a tiny molecule called free radicals are produced. Free radicals are constantly being produced in normal amounts; however, free radicals are increased by toxic substances that cause damage to your body’s cellular machinery resulting in cell and tissue damage. This process is called oxidative stress. The brain is highly susceptible to oxidative stress because it is an aerobic organ requiring lots of oxygen. In fact, many neurologists have speculated that the decline in mental function that occurs with aging is due to a lifetime of free radical hits to the brain. Not only has oxidative stress been implicated in diseases as Parkinson’s and Alzheimer’s disease; but also in the development of cardiovascular disease, diabetes, and cancer. Increasing antioxidant status has been proposed as a preventive means to reduce the development of these diseases. Antioxidants are your cells bodyguard and neutralize free radicals before they can cause cell damage. Research demonstrates that blueberry consumption boosts serum antioxidant status in humans. Elevated antioxidant levels in the body may protect against damage to cells and cellular components, thus helping to reduce the risk of many chronic degenerative diseases.

In the Journal of Neuroscience, 19-month-old laboratory rats—the equivalent of 60- to 65-year-old humans—were fed dried blueberry extract at a dose the researchers calibrated to be the human equivalent of one-half cup of blueberries per day. Three other groups of rats received spinach extract, strawberry extract, or a control diet. After eight weeks on the regimen, the investigators evaluated the rats—now equivalent in age to 70- to 75-year-old humans—using various tests of memory function. Compared to a control group fed only a standardized diet, each of the three supplemented groups performed at least marginally better on memory and learning tests In tests of neuromotor function, however, the blueberry-fed rats significantly outperformed the other groups.

Blueberries and other antioxidants may also prove capable of helping humans whose brains have been damaged by a loss of blood flow and the critical oxygen and nutrients it provides, a condition known as ischemia (one of the two principal causes of stroke). In a May 2005 study published in the journal Experimental Neurology, researchers documented how three groups of rats whose diets were supplemented with blueberries, spinach, and spirulina, respectively, all suffered less brain cell loss and were better able to recover lost function following artificially induced ischemia than rats in a non-supplemented control group. At autopsy, the scientists observed that the physical extent of ischemic damage to the brains of rats that had been fed the three supplements was significantly less than that suffered by the control group.

Adding a half of cup of blueberries to your diet everyday can provide significant neuroprotective effects on the brain. Blueberries have the highest antioxidant capacity of all fruits and vegetables. Recent studies, however, indicate that blueberries possess multiple, diverse health benefits including helping to prevent age-related memory and learning deficits, rejuvenating brain cell function, and helping to prevent cancer. Strong scientific evidence shows that blueberries protect against the most prevalent age-related maladies. Logically, liberal blueberry consumption is a critical strategy to obtain optimal benefit and protection against age-related changes. The blueberry may well be renamed the “brain berry.”