By now, you’ve probably already heard quite a bit about mTORC— but many are a bit unclear of exactly what it is. Well, from a basic fundamental standpoint, when you force a muscle to contract against a heavy load, the fibers that make up the skeletal muscle undergo stress and tear— and the primary response is to, in turn, signal protein synthesis. On a slightly deeper level, this activation is controlled by a series of phosphorylation (turning on) of a protein called mechanistic target of rapamycin complex … better known as mTORC. 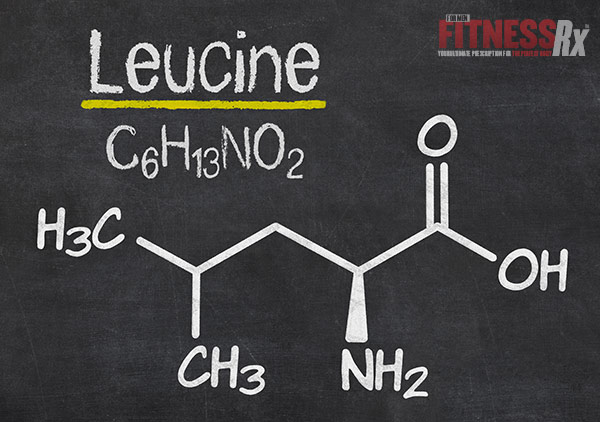 A number of research studies have been conducted on the ability of the essential amino acid, leucine, to activate mTORC activity— and they all vary in their experimental design, methodology and in the model used. For the most part, the majority of these studies have presented overwhelming evidence to demonstrate leucine’s ability to preferentially activate mTORC activity, thereby having a positive impact on muscle protein synthesis. It is important to note that while the exact, optimal dose of leucine needed to maximize muscle protein synthesis (MPS) remains unclear, some reports indicate that MPS reaches maximal stimulation after consuming between two to three grams of leucine.

Leucine’s Role as a Key Regulator

What we do know for certain is that increasing the concentration of leucine within an optimal dose of essential amino acids (EAA) does not have an added effect on MPS following a workout or at rest. In contrast with resistance exercise, sustained endurance exercise is mainly catabolic (muscle destroying), yielding reduced MPS and plasma leucine concentrations during exercise. This may be attributed to the metabolic demand for branched-chain amino acids (BCAAs) in exercising skeletal muscle. However, providing supplemental leucine during endurance exercise may enhance post-exercise MPS by limiting reliance on endogenous protein stores.

Of the amino acids, the EAA are primarily responsible for stimulating MPS, whereas non-essential amino acids (NEAA) are ineffective in increasing MPS. More specifically, the BCAAs are leucine, isoleucine and valine. These BCAAs are EAAs, and leucine is unique as a key regulator required to activate MPS. Interestingly, leucine, but not isoleucine or valine, can stimulate MPS through activation of mTORC signaling.

All these factors are important in understanding that leucine is an important anabolic trigger for its ability to activate MPS through mTORC signaling and, consequently, regulating muscle mass.

Therefore, ingesting leucine in amounts greater than that found in 20-25 grams of whey protein (naturally containing 2.5 to 3 grams of leucine) is unlikely to further stimulate an increase in the magnitude or duration of MPS. However, it should be stated that these results are derived from young, healthy men weighing approximately 187 pounds (85 kg), meaning the maximally effective dose of whey protein may be quite different, for example, in a 110-pound female athlete or a 240-pound male bodybuilder.

Leucine’s role in muscle protein synthesis is both that of a substrate as well as that of a signal/switch or anabolic trigger. No naturally occurring protein source contains only leucine and no other amino acids; therefore, our body interprets leucine’s availability as a sign that there are plenty of other amino acids (BCAAs and EAAs, in particular) available, and shifts muscular protein metabolism toward synthesis. However, since our body does not store amino acids, an overabundance of amino acids results in an increase in the rate at which amino acid oxidation occurs. Consequently, the ratio of amino acids that are actually used to “build muscle” to those that are burned to fuel your energy demands begins to decrease. In other words, the leucine would be primarily used as fuel rather than an anabolic trigger to increase muscle growth.

The bottom line is that when it comes to leucine supplementation, the addition of leucine is really only practical as long as we are talking about quantities that could be derived from nutrition alone, which is roughly 2 to 5 grams. This means that there is no need for a BCAA product that has some ridiculous ratio of 4:1:1, 8:1:1 or so on. The ideal and scientifically backed ratio is 2:1:1 for your BCAA product, and anything aside from that is a marketing scheme. Take advantage of this information by making the most of your time in the gym by optimizing your supplement stack and sticking with products that are designed and supported with research.

Drew Peters, MA, CSCS has been heavily involved in the fitness industry since 2008. While earning a double major in exercise science and nutrition sciences from Wayne State College in Nebraska, he helped spearhead the creation and growth of SupplementReviews.com and began his consulting services in product formulation. After earning his Bachelor of Science degree, Drew accepted a position of assistant strength and conditioning coach at the University of Nebraska Omaha, where he was the head strength coach for the men’s soccer, swimming and men’s and women’s tennis teams while working on his graduate degree. Since earning his master’s degree in exercise science, Drew has worked in the sports nutrition industry as a research and development scientist and freelance writer who specializes in nutrition, supplementation, product formulation and exercise.