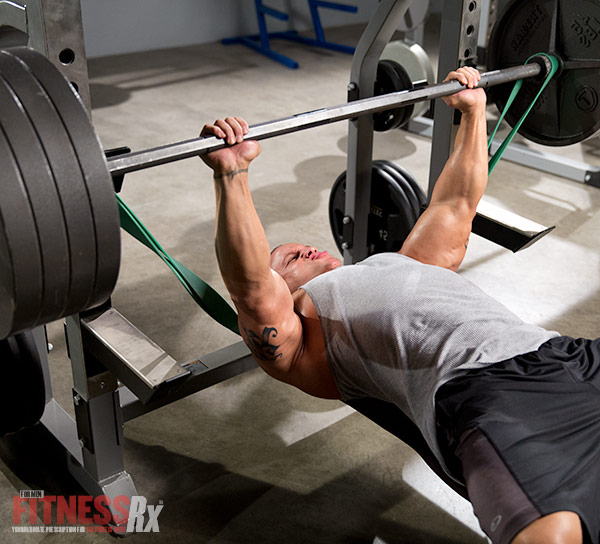 Elastic bands provide greater resistance through the entire movement as the band is stretched throughout the movement, causing increased tension within the band that generates greater resistance. This form of variable resistance from elastic bands provides benefits in certain weightlifting movements such as the bench press. Since greater muscular force occurs in the initial phase of the bench press, greater momentum is generated throughout the rest of the movement when using free weights, because free weights provide a constant resistance. Once the weight has built up momentum in the initial phase, less muscle activity is required to continue moving the weight throughout the rest of the movement, thus diminishing the training effect. However, the increase in resistance generated from elastic bands negates the production of momentum— disallowing the momentum-driven propulsion of the bar through the rest of the movement, creating a demand for greater muscle activity that ultimately stimulates greater size and strength. This effect was clearly demonstrated in a study by Jalal et al.3, which showed a 15 percent increase in muscle activity during elastic resistance training when compared to free-weight training. Moreover, the comparison between elastic training and free-weight training in this study also showed a considerably higher level of muscle activation in the later phases of the movement, supporting the concept that the increased resistance from elastic bands as they are stretched required the continual development of muscular force throughout the entire concentric portion of the movement.

Elastic resistance naturally produces a greater amount of tension on the muscle compared to free weights, because, as previously stated, it has the capacity to minimize momentum— increasing muscle activity throughout the entire movement, which effectively increases the amount of time the muscle is under tension. In addition, elastic bands also produce resistance independent of gravity, which fails to produce tension on the muscle during specific phases of certain lifts. For example, free-weight biceps curls produce very little muscle tension at the top of the concentric phase, due to the prominent horizontal movement of the weight that no longer creates gravitational resistance. On the other hand, the precisely positioned use of elastic bands that causes the elastic material to be stretched throughout the movement places resistance on the biceps throughout the entire range of motion. The continuous tension from elastic resistance training should stimulate greater muscle growth— as it has been well documented4 that greater time under tension potently increases mechanical tension on the muscle cell, producing more muscle cell damage and/or increased metabolic stress, which powerfully enhances muscular size. Clearly demonstrating the ability of elastic bands to build muscle, a study by Colado et al.5 found that elastic resistance is as effective as, if not better than, free weights or resistance machines at increasing both lean body mass and strength.

The positive impact on strength from variable resistance coming from chain-loaded training occurs when appropriately positioned chains on the barbell, that settle to the ground one link at a time during the descent portion of the movement, effectively decrease the resistance on the bar as more and more links in the chain rest on the ground. In addition, going in the upward direction lifts the chain off the ground one link at a time, incrementally increasing the resistance of the bar throughout the ascent phase of the lift. Once again, when the variation in resistance adequately matches the increase or decrease in muscular force that naturally occurs during the movement, the chains effectively provide a potent stimulus that uniquely drives strength gains.