Today, just about everyone, regardless of fitness level or chosen method of training, is doing abdominal planks, as everyone seems to understand and appreciate their benefits and practicality— planks require no equipment and are easy to learn. That said, there is still a large amount of room for improvement. Not to mention, basic abdominal planks are just plain boring.

Put simply, an abdominal plank is a static hold (hover over the floor) performed from a push-up position on your forearms that requires your anterior core muscles, specifically the abdominals and hip flexors, to work in order to maintain your spinal alignment to prevent your lower back from over-arching and hips from sagging toward the floor.

In this article I’m going to show you why 1) if you have been using regular planks, you’re probably just spinning your wheels, and 2) my top five abdominal plank progressions you can immediately apply to spice up your abdominal workouts and get more bang for your plank-training buck.

If you can do a basic abdominal plank for 30 seconds, I’d say it’s time you stop boring yourself with them any longer and progress to the advanced plank versions I’ve provided you in the article. And not just for that reason, but also because you’re already doing basic planks every time you do push-ups. From a body position and core muscle activation perspective, a push-up is an abdominal plank because your torso is in the exact same position in both instances. The only difference is in the push-up, you’re also involving your chest, shoulders and triceps (in addition to the core muscle activation), therefore giving you more muscle activation, which makes your time more beneficial and productive. Not to mention that if you’re already doing push-ups in your workout, it is unnecessary to perform basic planks in your workouts because you’ve already done them (whether you were aware of it or not) when you were doing the push-ups.

In short, instead of doing basic planks, I say just do push-ups— keeping good spinal alignment, of course— and, instead of boring yourself with a redundant basic abdominal plank workout, spend that time doing the advanced plank variations I’m providing you.

There are really two types of planks and their variations: front planks and side planks.

Before I show you my top five advanced abdominal plank variations, let me first make it clear that you have no business performing any of these higher-level progressions, or progression to any other type of exercise for that matter, until you can perform the basic plank— keeping good alignment— for at least 30 seconds.

With that said, here’s my top five list of advanced plank variations: 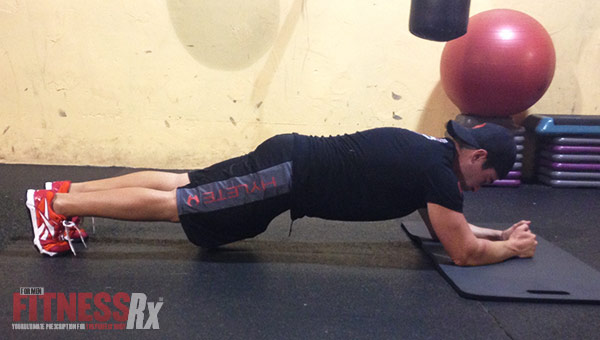 As stated in the 2013 paper published ahead-of-print in the NSCA Strength & Conditioning Journal, “The long-lever posterior-tilt plank (LLPTP) is an advanced version of the traditional prone plank designed to impose a greater stimulus on the core musculature and thus provide better utility for those who are well trained.”

The authors of the article assert, “Holding an isometric posterior pelvic tilt has been shown to generate greater muscle activation in the lower rectus abdominis, upper rectus abdominis, external oblique, erector spinae, and multifidus musculature in both healthy subjects and those with low back pain.”

In addition, the authors also state that, “The longer lever length and narrower base of support associated with the LLPTP makes the exercise less stable as decreased stability has been shown to significantly increase core muscle activity during performance of various core exercises, including the prone plank.”

To perform the LLPTP, get into an elbow plank position (prone, hovering over the floor on forearms and toes) with your elbows spaced approximately six inches apart at your nose level. Contract your glutes and posteriorly rotate your pelvis by bringing your front hip bones toward your head and your tailbone toward your feet.

To increase the level of difficulty, you can move your elbows further up (above your eyes), further straightening your arms, which further lengthens the lever arm and therefore increasing the demand on your abdominal musculature. That said, at no point when performing this plank variation, or the other plank variations to follow, should you feel pressure or pain in your lower back. So, be sure to adjust the lever arm length accordingly so you can perform these exercises with good spinal alignment and zero discomfort (aside from muscular fatigue). 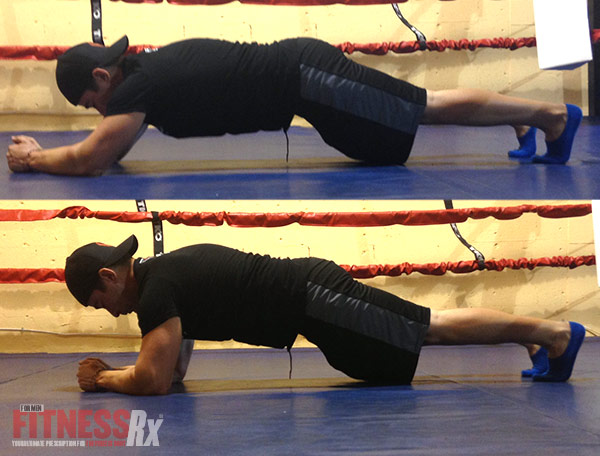 If you’d like to take advantage of the additional abdominal activation and exercise challenge provided by the LLPTP, but get bored with static holds in the same position, the body saw is for you!

Put simply, this is a moving plank where you transition back and forth, by sliding your body in a saw-like fashion, over the floor from a traditional (short lever plank) to a long lever plank. So, in order to perform this exercise you’ll need something that allows your feet to slide, which requires you to place something like a towel under your feet and perform this exercise on a surface like a mat or aerobic room or basketball-type flooring. Place a pad, pillow or folded towel under your elbows for comfort.

Be sure to squeeze your glutes tightly each time you transition from your elbows being bent under your shoulder to straightening them as you push your body back into the long lever position. Also, again, be sure that you slide your body back as far as you can without feeling discomfort in your lower back.

Perform two to three sets or six to 10 reps. 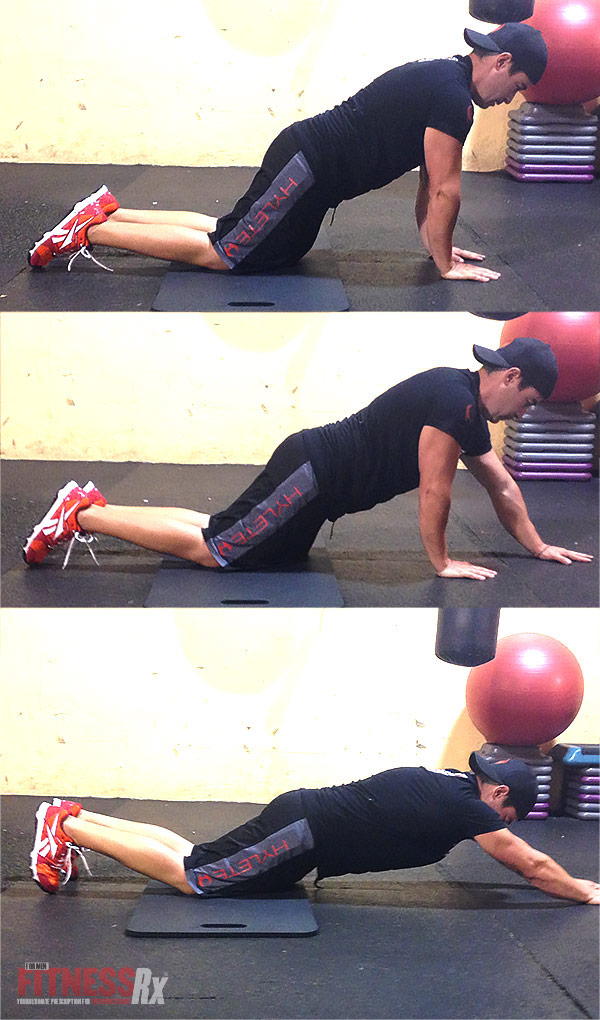 If your training environment is not conducive to performing the body saw exercise, I recommend using arm walk-outs, as it requires no special setup considerations. All you need is a soft surface to rest your knees on like a mat or a rolled-up towel.

From a kneeling position with your hands on the floor and your elbows straight, and your torso making one line from your shoulder to your knees, walk your arms out in front of you as far as possible without allowing your lower back to extend beyond the starting position. Reverse the motion, walking your hands back so your hands end up just above your shoulders.

Perform two to four sets of four to eight reps. 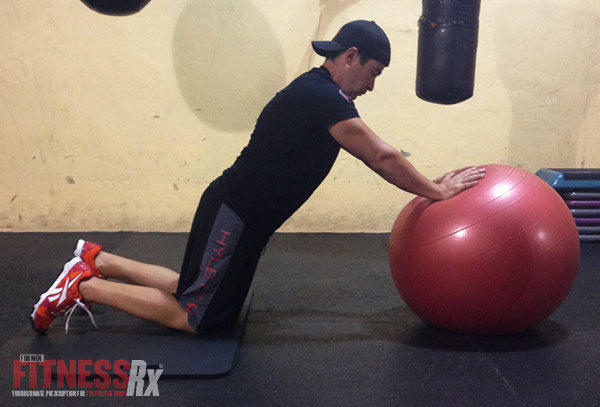 Kneel on the floor with your arms straight and your palms on a 55- to 65-centimeter stability ball with your knees and hands hip-width apart. Drive the ball away from you by extending your arms overhead as if you were diving into a pool. Push the ball out as far as you can without allowing your head or lower back to sag toward the floor. Once you’ve gone as far as you can or your arms are completely up overhead in a straight line with your torso, reverse the motion and pull the ball back to the starting position where your hands are just above your head. 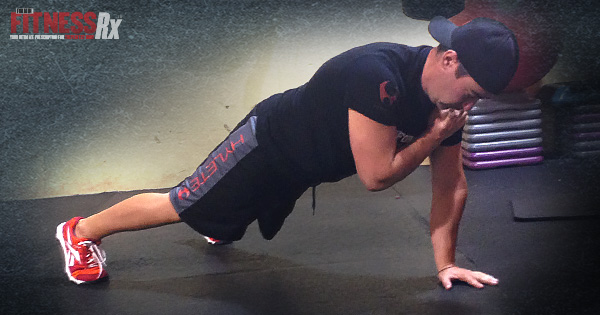 So far I’ve shown you the LLPTP and three other plank variations, which are different permutations of the LLPTP you can use depending on your ability and equipment limitations. However, the one-arm plank is really an advanced version of the basic plank, not a variation of the LLPTP. The reason why I’m including this is because the one-arm plank can serve as a nice complement to use along with one of the exercises previously mentioned, as it hits the core musculature differently.

Put simply, the one-arm plank adds an element of rotation because gravity is pulling your unsupported side— the opposite side of your hand that is on the floor supporting you— toward the ground. This creates a unique loading stimulus from the plank versions above where both arms are always in contact with the ground.

Begin in a push-up position with your hands and feet shoulder-width apart. Lift one arm off the ground without allowing your shoulders or hips to rotate or allowing your head or belly to sag toward the floor. Pause for five to 10 seconds before switching hands.

You can also choose to perform this exercise from the elbows. If you do so, it’s more comfortable to place a pad, pillow or folded towel under your elbows.

Perform two to three sets. In each set, perform 2-3 holds on each side.