Want Bigger Arms? Then listen up.

Your biceps are comprised of three main muscle groups: the short head, the long head, and the brachialis. In order to build a strong and thick-looking bicep you want to make sure you are effectively training each muscle group within the biceps.

While the standard barbell curl is one of the most effective movements for building your arms, it’s important to supplement this movement with other bicep targeting exercises to make sure you are hitting your arms from all angles.

With these 5 bicep exercises in your chamber you can be sure to sculpt a set of guns that are always locked and loaded.

5 Bicep Exercises You Need to Be Doing 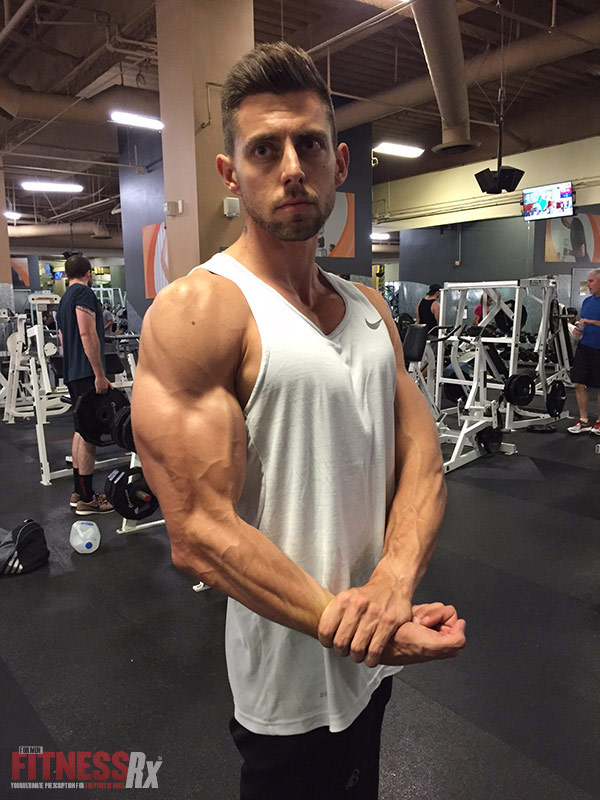 The Drag Curl is all about form and isolating the bicep. This movement places your biceps behind the midline of your body, placing the focus and squeeze on the long head muscle group of the bicep.

The Movement: The Drag Curl can be performed using a barbell or a Smith machine. Stand up, holding the bar with your palms up, and the bar resting on your thighs. Keep your chest up, head straight, and curl the weight directly up while pushing your elbows back behind your body. You want the bar of the barbell or Smith machine to ‘drag’ across the front of your body as your curl the weight up, hence the name of this movement. Squeeze your biceps at the top of the movement, holding the squeeze for 2-3 seconds at the top of the movement, and then move the weight back down to starting position.

The Zottman Curl is an extremely underrated bicep movement for targeting the short head and brachialis muscle groups within the arm. For those with long forearms and weak wrists, this is the perfect movement to add to your arm day as it will help you build a thicker looking arm and improve your wrist strength.

The Movement: Perform this exercise while standing, using dumbbells 10-15 pounds lighter than the weight you would normally use for regular dumbbell curls. This exercise isn’t about moving serious weight, but rather the squeeze and control within the movement.

With the dumbbells in each hand and palms facing up, curl the weight up towards your body as you would with a normal dumbbell curl. At the top of the movement keep your arms flexed and pause for a brief second, then turn your wrist 180 degrees so your palms and the weight are now facing down towards the ground. Your hands are now in a position as if you were doing a reverse bar curl. Lower the dumbbells down slowly, focusing on the concentric phase of the movement, until they’ve reach the starting position and that’s one rep. Turn your wrists back to a face-up position to begin your next repetition. 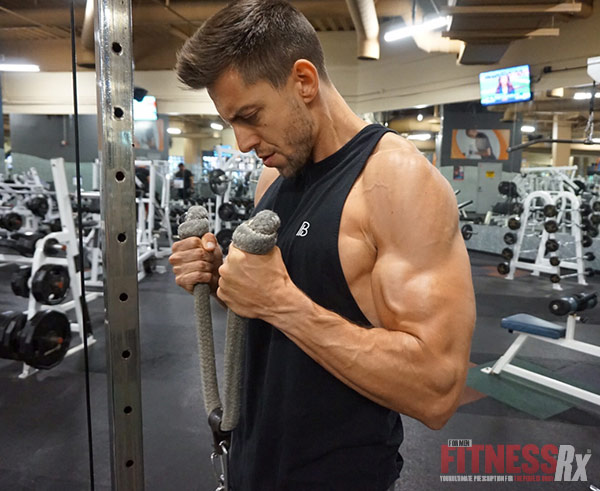 The Hammer Curl is a popular bicep building exercise, but is typically done with dumbbells in each hand. Performing the hammer curl on a cable machine with a rope attachment allows you to keep constant tension on the biceps through both concentric and eccentric portion of the movement. 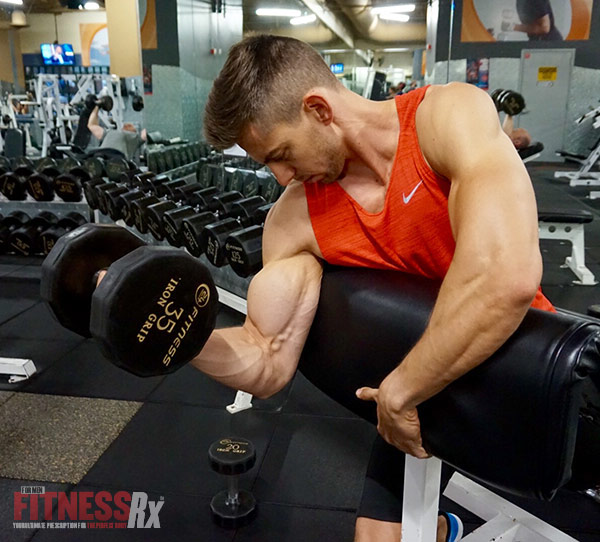 The Spider Curl was a favorite of the original Mr. Olympia, Larry Scott, and for good reason. This exercise is one of the most intense bicep movements you can perform and will have your biceps screaming at you to stop. But, you won’t because bigger, stronger biceps is your goal.

The Movement: Similar to the preacher curl, you will perform the Spider Curl on the backside of the preacher curl bench as you want your arms locked in at a 45 degree angle. With this movement you want to focus on eliminating any assistance from your shoulders and allow your biceps to do all the work. Using a barbell, curl the weight up as you would with a preacher curl, keeping your elbows tight and secure next to the bench. Lower the weight back down, but not all the way down so that you lose the tension within your biceps. The important part of this movement is keeping constant tension on the biceps during the upward and downward movements. The pump from this exercise is something you will never forget and you will crave it each time you hit the gym on arm day.

No, I’m not talking about Blackjack or a pick-up basketball game. 21’s are an excruciating bicep exercise where the pain is worth the reward. Using this exercise as your first exercise on arm day will have your biceps primed for some serious growth.

The Movement: Using a barbell you will get into position as you would to perform a regular standing barbell curl. But, with 21’s you will be performing 21 reps each set. You will perform 3, 7 repetition sets back to back to back. First, with the weight hanging down on your thighs, curl the weight up only half way, completing only the bottom portion of a full curl movement. Lower the weight back down to starting position. After completing 7 reps of the bottom curl portion, bring the weight up hallway with your arms forming a 90 degree angle. This will be your starting portion for the next 7 reps as you will be performing reps of strictly the top portion of a curl movement. After completing these 7 reps, you will finish with 7 full rep barbell curls for a total of 21 repetitions.

For an extra burn to really hit the biceps from all angles, perform 3 sets of these all at different grip lengths. For example, use a close grip for the first set of 21’s, a shoulder width grip for the second set, and a wide grip for the 3rd set.