Even the largest athlete seeks to capitalize on the fat-reducing effect of exercise while slapping 45-pound plates on an already bowed Olympic bar. Whether one falls in the group focusing on the LED metering calories on a treadmill or those who don’t stop till they drop, the ideal is that all voluntary activity should burn body fat like wax dripping off a candle. As most people learn, however, dropping body fat through exercise is agonizingly slow.

How is it that the treadmill displays hundreds of calories being burned every session, but the mirror shows nothing for the effort? Well, treadmill readouts are unrealistically optimistic; some experts believe 300 minutes of exercise weekly optimizes fat burning, with a minimum of 150 minutes per week to get any effect; another crucial matter is the need to control calories in, as much as calories out. Exercise won’t burn off stored fat in a positive calorie balance. Fat loss is dependent upon the individual following a hypocaloric diet; exercise can promote the rate of fat loss, and offers a number of health benefits beyond simply dieting.1,2

When an optimal, hypocaloric diet is being followed – approximately 200-500 calories below maintenance requirements – how can a person maximize the number of fat calories burned during exercise? One needs to understand how the skeletal muscle cell controls the rate of calorie burning, what fuel is burned (fat versus carbohydrate), how fat is delivered to the furnace, and where that fat comes from. 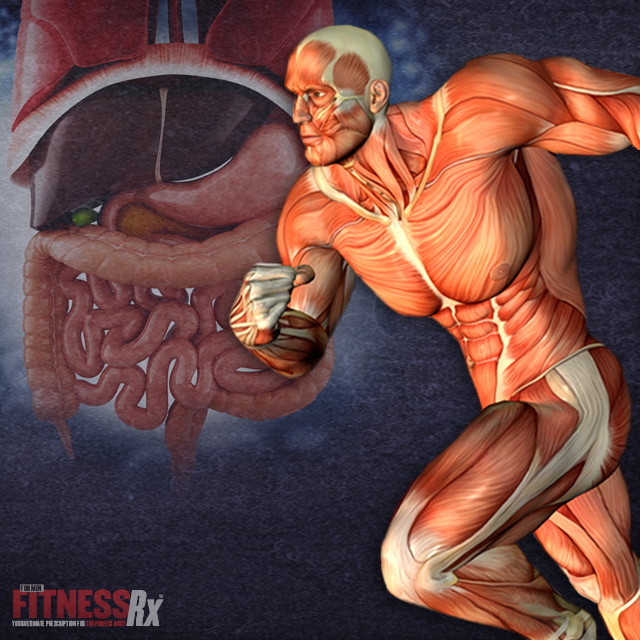 The simplistic understanding that the longer one exercises, the more calories are burned, works. A basic understanding of cell energetics explains why one needs to exercise at a moderate intensity to make fat the preferred fuel source for meeting the energy demands of the cell. There is a lot of mudslinging between those who say more fat calories are burned when exercise intensity approaches the anaerobic threshold, resulting in lactic acid buildup, versus those who point to the greater percentage and sum of fat-based calories burned over time.

Exceeding the anaerobic threshold interferes with fatty acid oxidation through a number of mechanisms, making all-out effort less productive for short-term fat loss.3 The optimal steady state pace for fat-as-fuel exercise appears to be 65 percent VO2 max for trained individuals, and 50-60 percent for the untrained (hustling but not breathless).4 Though exercise geeks will argue the point, an individual has to acknowledge what he can and will actually do. The best cardio/aerobic fat loss training generally follows an interval design, alternating lactic acid-producing effort with moderate-paced effort to allow for recovery.5,6 This seemingly allows one to train at a higher percentage of his VO2 max over time, equating to greater calorie-burning and fat-burning.

There’s more to consider than just increasing activity; fat has to be available to the muscle to burn for energy production. Fat, more specifically fatty acids, are burned in specialized areas of the cell called the mitochondria; after being broken down into two carbon fragments, fatty acids are burned like the wax of a candle.7 Like a candle, fatty acids produce energy (light for the candle, ATP for the cell) or heat. Heat production from fatty acid oxidation (calorie burning) is critical to maintain a regular body temperature. However, absent certain drugs or infection, it is difficult to increase fatty acid oxidation for increased heat production, and the risks of hyperthermia (high body temperature, fever) are great.

Fat is not stored to a great degree in skeletal muscle; small reserves are held there for long-term energy. When intramuscular fat exceeds a healthy concentration, it interferes with cell physiology and insulin sensitivity.8 Intramuscular fat is most relevant for those on low-carbohydrate diets, as it increases in that state.9 Intramuscular fat is broken down into fatty acids under the control of signals responding to the energy demands of the cell. It is a slow process that is impeded by acidosis, so those dependent upon fatty acids are limited to exertions no greater than the anaerobic threshold, once the very limited muscle glycogen stores are depleted.3 Signals that stimulate the breakdown of intramuscular fat can be initiated by receptor activity on the membrane surface of the muscle cell (ephedrine/caffeine type) or possibly by calcium-stimulated reactions induced by calcium released from the sarcoplasmic reticulum (a network within the muscle cell) during contraction.10,11 Those who follow a mixed, hypocaloric diet are less dependent upon intramuscular fat.

Dietary fat is digested in the stomach and intestines, absorbed and packaged into chylomicrons (a fat cargo truck) to enter the lymphatic system through the intestinal lacteals. The lymphatics empty into the circulation and the chylomicrons are broken down to fat (triglycerides), cholesterol, and other fatty molecules. Fat circulates until grabbed by an interested cell, is broken down into fatty acids, and taken into the cell. If the cell is metabolically active, (i.e., working muscle, heart), then the fatty acid may be shuttled directly into the mitochondria for energy production. If the cell is metabolically dormant (i.e., resting muscle, adipocyte), fatty acids are reformed into triglycerides and stored.

As the goal for most is to reduce stored fat, one should be active during the post-prandial (after a meal) rise in blood triglycerides to divert circulating triglycerides into calorie-burning processes rather than fat storage.12 This can be accomplished by a vigorous walk (peak blood triglyceride levels) after a fatty meal.13 Unfortunately, most people eat the heaviest, fattiest meal in the evening, tending to sleep during the optimal fat-to-storage time window. The form of fat being consumed can influence oxidation versus storage. There is a need for a quantity of saturated fat in the diet, as the long-chain fatty acids present in animal fats comprise the majority of cell membranes. However, there are advantages to incorporating a blend of other fats, many of which more readily enter the oxidative cycle (calorie burning) than storage. Though not traditional American fare, medium-chain triglycerides from coconut, oleic acid from olives, and Omega-3 fatty acids from fish oil (DHA, EPA) are widely available. Research is not conclusive in all cases, but there is significant evidence that these fats are more readily burned for energy.14-16

One last dietary consideration involves carbohydrates. In addition to the effects of insulin which will be discussed, high-glycemic load diets exacerbate the rise in postprandial triglycerides, possibly by increasing hepatic (liver) lipogenesis (fat production).17,18 It was thought that the glycemic index was the critical factor to control, but it appears that it relates more to total dietary carbohydrate, as substituting complex carbohydrates for simple sugar (sucrose) from the diet does not always affect triglyceride levels in the blood; there is a great deal of conflicting data.19 It is likely that one factor accounting for the success of very low-carbohydrate diets in reducing stored fat is the reduction in circulating fats after feeding and in the fasted state. This would force the body to break down stored fat to meet activity-related increases in energy demand.

Interestingly, factors increasing the breakdown and release of stored fat also promote the breakdown of intramuscular fat, as well as how quickly calories are burned. Adipocytes— cells making up fat tissue— are extremely sensitive to insulin. Released in response to the sugar in a meal, insulin signals fat cells to stop breaking down stored sugar, instead storing fat from a meal into body fat. Efficient fat loss cannot happen unless insulin is at a low concentration. Thus, one factor to consider in timing exercise for optimal fat loss is to avoid training when insulin is elevated. It may take up to three to four hours after a meal for a prior insulin peak to clear the blood. The best time for exercise may be before breakfast, as sleep is often the longest fasting period for most.

Hormones that promote fat release from fat cells, and fat-burning in the muscle cell, are those associated with high energy states; norepinephrine (adrenalin-like neurotransmitter) and thyroid hormone are the dominant players. When the fat cell is stimulated by these hormones, stored fat is released to circulate through the bloodstream. At the level of the muscle cell, a specific fatty acid transporter grabs the circulating fatty acid, pulling it in to shuttle it toward energy production; this same transporter may also be activated by muscle contraction.10,11

The rate of fatty acid burning is strongly dependent upon how much fatty acid is available.20 In addition to the fatty acids pulled in from the blood, fatty acids are also released from the reserves stored within the muscle itself when stimulated by norepinephrine. In both the fat cell, as well as the muscle cell, this reaction is dependent upon a messenger molecule called cAMP. Rapidly deactivated by an enzyme called adenyl cyclase, cAMP levels can be elevated and prolonged with the use of caffeine, explaining the potency of the once popular ephedrine/caffeine products. Caffeine alone may not be effective in promoting intramuscular fatty acid oxidation, necessitating the use of an adrenergic stimulant or physiologic excitation (cold, fear, competition).21

As fatty acids become available, a cascade of effects occurs to shuttle these fatty acids from the interior of the muscle cell to the mitochondria, the furnaces of the cell. The belief of many was that increasing the carrier molecule that shuttles these fatty acids through carnitine supplementation could enhance fat-burning; this has not held to be true.20 Few products have been found to be of any benefit in regard to increasing fatty acid oxidation, and most have been withdrawn, due to safety issues. One possible supplement group that may hold promise is bile acids, which activate thyroid hormone in muscle and brown fat – though any effect is likely to be fairly limited.22

Not only is it important to focus on the style of exercise, but the timing. Meal-related changes in the hormonal environment affect fat storage versus breakdown. To focus on burning stored fat for fuel, it is critical to avoid exercise during a period of elevated insulin exposure; skip the sugar-laden pre-workout drinks, too. Insulin can remain elevated for up to three hours following a meal, but in most people it returns to baseline in about 90 minutes. Waiting for the post-prandial (after eating) dietary fat peak, which occurs four to six hours after a meal, may shuttle the fat from a meal away from entering storage by utilizing it during acute exercise. The time that most readily lends itself to a stored-fat-as-fuel workout is prior to breakfast, to take advantage of the overnight fast.

The fat being burned can come from a meal, stored body fat, or small reserves stored in muscle cells. If the insulin concentration is low, as it should be, and one exercises first thing in the morning to remove the presence of fat from a meal, maximal release of stored fat can be elicited by following an interval program, preferably in a cold environment, to maximize the percent and amount of fat burned.
References: