You must have your own personal list of the 10 benefits of sex – after all, humans have survived because they are wired to enjoy and benefit from sex. It turns out the collective efforts of health care professionals and researchers have come up with their own list that is more scientific and beneficial to one’s health. This list demonstrates some of the benefits of a healthy sex life, and supports a desired action and may influence one’s partner if placed prominently on the nightstand.1 It is important to note that this list assumes the sex is occurring between consenting adults, preferably in an emotionally invested relationship. So, here are some healthy reasons to rekindle the romance and turn up the flames of passion.

1. Sex Is a Great Stress Reliever

Perhaps it is a primitive pressure ingrained in our genes, as our species has climbed up the food chain, struggling for eons to evade faster and fiercer carnivores. For Homo sapiens to survive, it was necessary to breed early and often. Typically, the fittest members of a tribe or clan claimed mating rights. Later, as civilizations emerged, individuals facing mortality could find solace in knowing that their bloodline continued through offspring. It is easy to intuit how frequent and satisfying sex might signal to the primitive brain that not only will mankind survive, but one is a mighty hunter whose legacy will be carried out by his many scions as the bards sing his praise. Well, maybe that is stretching it a bit, but in the moment, it seems that glorious.

Of course, modern man worries more about what’s for dinner than becoming dinner. Nonetheless, the signs of stress are the same, including high blood pressure. Research from Scotland published in the journal Biological Psychology reported on the relationship between blood pressure response to stress (e.g., speaking in public, answering verbal math questions).2 No shock to the intimately initiated, the subjects who enjoyed intercourse, as opposed to abstinence or “other sexual behaviors” kept their cool better, with lower blood pressure during periods of calm. This study confirmed earlier research that showed that people who lived with his/her sex partner had lower diastolic blood pressure and a more dominant parasympathetic tone, suggesting a calmer physiology.3 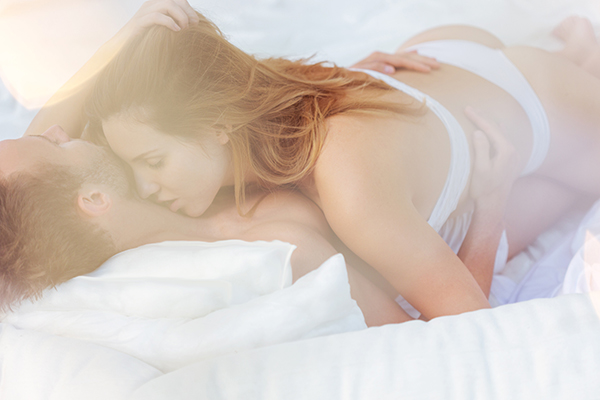 In Pennsylvania, researchers measured the salivary IgA (an antibody found in one’s saliva and other secretions) in college students and compared the levels to reported sexual frequency.4 They discovered that subjects having frequent sex (once to twice a week) had higher levels of IgA than those with less vigorous sex lives. Surprisingly, having sex more frequently resulted in lower IgA levels. IgA protects against colds, flus, etc. However, before getting too excited (no pun intended) about this romantic alternative to Kleenex (another unintended pun), realize that the increase in IgA, which occurs in other secretions as well, isn’t designed for improving health; it is actually protecting against certain things that are passed between intimate partners. IgA levels in the cervical mucus (the cervix is the opening to the uterus in women) increase to peak levels just prior to ovulation as estrogen levels rise.5 In lower species, this is the period when a female is most receptive sexually and therefore most likely to be exposed to sexually transmissible diseases. While higher IgA may be a healthy benefit, it is likely your body fighting off the invasion of your partner’s foreign germs and secretions.

While sex on a treadmill may burn even more calories, the average person can burn 85 calories during a 30-minute lovemaking session. Given the “untraditional” designations given for certain forms of sexual activity, it is difficult to assign much validity to the figures. This figure is likely generous, as more recognized sources suggest sex is the metabolic equivalent to walking briskly for 10 minutes, then climbing two flights of stairs.6,7 Further, the average duration for sexual activity is roughly half the 30-minute period used in our estimate.8

4. Sex Is Good for the Heart

No, not in a Valentine’s Day way, though emotions may play a role in the effect. As people age, concerns about heart attacks and strokes during sex become more prevalent. Considering the elevation in blood pressure and heart rate that occur during intercourse, this is a reasonable concern.6,7 However, in a report published in the Journal of Epidemiology and Community Health, researchers in the United Kingdom learned after following a large group of men for 20 years that frequency of intercourse was not associated with stroke incidence.9 Further, those having sex at least twice a week had half the risk of suffering a fatal heart attack as those who “coupled” less than once per month.

5. Sex Allows One to Feel Better About Himself

Maybe … this is an area that is just entirely too complicated to say that a hop in the sack will cure low self-esteem, the blues, depression, etc. Antidepressant prescriptions sit near the top of all drug classes dispensed from pharmacies. Certainly, many people get an ego boost after satisfying one’s self and partner, but low self-esteem can also deter from sexual interest, confidence and performance, turning what should be an emotionally enriching experience into another and more personal failure.10,11 Interestingly, many people point to a survey performed at the University of Texas and pick out one or another reason for having sex.12 However, the range of answers (237 different reasons) really prevents one from reaching any conclusion than it is a very individual experience. Not to dampen anyone’s enthusiasm about or for sex, but regardless whether it be casual conquest or intimate intercourse, the effect of sex on a person’s psyche goes deeper than the physical achievement, reflecting one’s emotional, psychological and environmental state at the time.13,14

As inferred above, self-esteem and relationships are very complex issues. Yet, the prototypical relationship in the human experience – that of a mother and child – includes hormonal responses that strengthen the emotional bonding of an experience. The natural birth of a baby is associated with a number of hormonal bursts that prime the uterus to contract and dull the pain response. Among these is the secretion of a hormone from the pituitary (a gland in the brain) and placenta of a rarely mentioned hormone called oxytocin. Oxytocin affects most tissues in the body, but its relevant role in relationships and intercourse is its ability to initiate, promote and enhance emotional bonding.15 Oxytocin is released in high concentration at the time of childbirth and during nursing, priming the emotional bond between a mother and her newborn. It is also released during orgasm and if supported by physical and social cues, may enhance the emotional bond between sex partners.15,16 Of course, if the immediate post-coital action is pulling one’s pants on while rushing out the door, the bonding is less intense than if the couple continues sharing intimate conversation and contact. 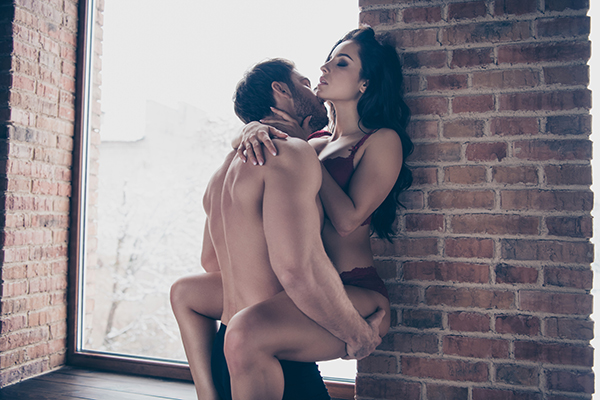 As mentioned earlier, during childbirth, the mother’s system is flooded with a cocktail of hormones and neurotransmitters. Oxytocin and prolactin both surge during childbirth and while breast-feeding. The effects of these and other hormones goes beyond giving birth and feeding an infant, and obviously have other functions in men. Oxytocin and prolactin levels are elevated during and following orgasm, presumably serving to support the emotional bonding of lovers.17-19 However, as many have noted anecdotally, sex seemingly reduces pain, whether it be a headache or an injury.20,21 This effect is usually written off as being all in one’s head (meaning mind) due to the sex act(s) distracting one from pain rather than providing pain relief. However, it has been shown from animal studies to pregnant women to healthy volunteers that an oxytocin surge (inhaled, due to childbirth or orgasm) makes one more tolerant of pain. Something to keep in mind for the next time a partner says, “I have a headache.”20

The relationship between orgasm frequency and prostate health has been debated for centuries. Texts written about Eastern religions, such as Buddhism, assert that semen represents one’s vitality or life fluid. The goal in some sects is to transcend the desire for ejaculation, preserving the life fluid and reducing suffering.22 However, other ideologies believe that suppression of sexual desire increases one’s stress, harms the psyche and promotes violence.23 Personal beliefs aside, research suggests that frequent ejaculation (five or more times per week) during the peak childbearing years (20 to 30 years old) protects against the later development of prostate cancer; later sexual activity had no association with prostate cancer.24

A study published in the Journal of the American Medical Association confirmed the protective effect of ejaculation against prostate cancer, extending the benefits through midlife (40-49 years old).25 Though the mechanism is not explained, it appears to be similar to the protective effect provided by breast-feeding against certain forms of breast cancer in women.26

Exercising pelvic floor muscles may sound like something done during the lambada (a Brazilian dance). However, the pelvic organs are supported by a mesh of muscles that play a much greater role in women. During Lamaze classes, women are instructed to perform exercises called Kegels to strengthen these muscles; this prevents later prolapse (the bulging of female sex organs through the pelvic floor). Even minor prolapse can lead to urinary incontinence (leaking, dribbling) and sexual dysfunction. For men, Kegels are suggested to combat urinary incontinence, improve erections and control over orgasms.27 Instructions for performing Kegels can be found online.

The importance of sleep for optimal health is greatly underestimated. Poor sleep can lead to obesity, pre-diabetes, type 2 diabetes, hypertension, metabolic syndrome and a variety of other disorders that negatively affect health and may lead to a premature death.28-30 Fortunately, as many disgruntled spouses attest to each other in coffee shops or via group texts, the release of sex can put a person to sleep quickly and deeply. The hormonal flush of an orgasm, combined with the psychological benefits of consensual passion, induces a state of relaxation. Much of the credit has been assigned to oxytocin (once again).31 However, the state of sexual arousal induces elevations in excitatory neurotransmitters. Following orgasm, these “excitors” plummet, leaving the individual in a relative state of stupor. It is a physiologic analogy to being at the Super Bowl one weekend, jumping amongst a cheering crowd, compared to standing in an empty stadium the next day. The physical letdown makes a person want to curl up and go to sleep. 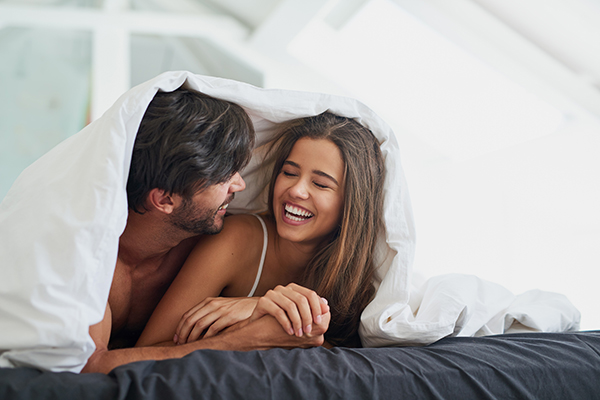 2. Brody S. Blood pressure reactivity to stress is better for people who recently had penile-vaginal intercourse than for people who had other or no sexual activity. Biol Psychol, 2006 Feb;71(2):214-22.