Let loose your inner sexuality, and you’ll have mind-blowing sex that will knock your socks off.

Sex is one of life’s great pleasures. Most men think of sex once every 3 minutes. Yet, many men feel sexually inadequate and don’t get the pleasure from sex that they should. They long for fulfilling, hot sexual relationships that make their toes curl and force steam to come out of their ears. Doubts, misconceptions and inexperience are the basis for many sexual problems. Get rid of these hang-ups, and you’ll have sizzling, fulfilling sex.

Good sex is central to happiness, so get rid of your misconceptions if you want to live a happy life. A study by the National Bureau of Economic Research, a nonpartisan research institute that provides economic information to policymakers, businesses and universities, found that sexual activity was the strongest predictor of overall happiness – the more sex, the happier the person. Happiness ratings increased progressively in men who had sexual intercourse two to three times a month, once weekly, two to three times per week and four times per week or more – with no trend toward leveling off.

Hang-ups and misconceptions contribute to bad sex. Understanding and learning to deal with them will free your inner sexuality and allow you to have a sizzling sex life.

According to a study by Lifestyles Condom Co., the average man’s erect penis is only 5.877” long, with two-thirds falling between 5.1” and 6.2”. About 17 percent of men measure less than 4.5”. The penis size reported in the Lifestyle study was shorter than that found in the famous Kinsey report, which was published more than 50 years ago. While the Kinsey study asked men to measure their own penis size, the Lifestyle study measured penis size directly.

More than 50 percent of women say size matters. However, that leaves the other 50 percent who say it doesn’t. The width of the penis is more important than length for vaginal sex. The vagina isn’t very sensitive, except for the outer portion (nearest to the outside of the body) and its opening. Also, the vaginal walls can expand and contract to adapt to the size of the penis. A wider penis can better stimulate the clitoris, while a longer penis reaches a part of the vagina with few sensory nerve endings. Although some women prefer to have sex with a man with a large penis, penile length and circumference aren’t good predictors of how satisfying a sexual experience will be. Good sex requires much more than stimulating thousands of nerve endings in the clitoris with a large penis.

The brain is the most important sex organ. The sexual experience involves much more than penis and vagina. Have sex with her mind as well as her sex organs and you’ll make the experience sizzle for both of you. Women are wired differently than men. While many men are satisfied with getting off, women crave the total experience. They need the closeness and bonding that comes with romance and good sex.

You probably don’t have a smaller-than-average penis, you only think you do. One urology study of men undergoing penis enlargement surgery found that the majority had normal-size penises. Get over your penis inferiority complex. Learn to use all the tools in your sexual arsenal: your mind, voice, fingers, toes, butt, breasts, nipples, tongue, breath and warmth. Most important, learn to use your soul. Let loose your inner sexuality, and you’ll have mind-blowing sex that will knock your socks off. 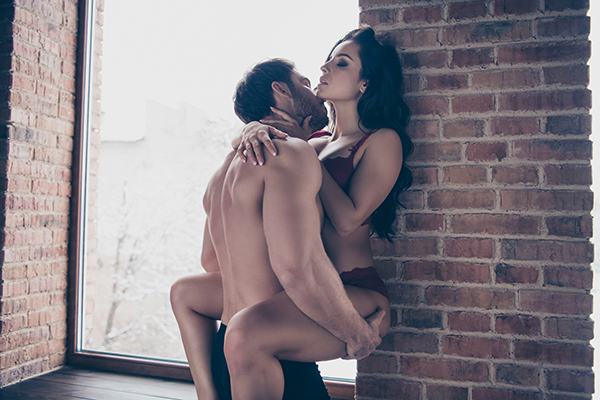 Premature Ejaculation. This is the most significant sexual problem in men – more prevalent than erectile dysfunction, low sex drive, delayed or inhibited orgasm, or physical abnormalities of the penis. It affects more than 30 percent of men and is most common during the late teens and 20s. Some men have life-long problems with PE, while others develop it suddenly because of physical changes, medications or street drugs.

Time and experience are the best cures for premature ejaculation, and a little attitude adjustment wouldn’t hurt either. Instead of racking up conquests, develop relationships based on love, trust, compatibility and passion. You’ll develop sexual control as you build your relationship and communication skills with your partner. Most men with PE don’t want to wait that long, so here are other suggestions to help you take control and last all night.

Many physicians use antidepressant medicines, such as Prozac, to treat premature ejaculation. Unfortunately, these drugs can also cause impotence in some men – so one problem may substitute for another. Israeli scientists found that giving patients Viagra with the antidepressant Paxil not only improved erections, but prevented premature ejaculation. Viagra works by increasing the secretion of a chemical called nitric oxide, which increases blood flow to the penis. High levels of nitric oxide interfere with ejaculation, which prolongs the sex act. Also, the Viagra produces a firmer erection, which gives men more confidence and control.

Erectile Dysfunction (ED). Erection problems are surprisingly common in 20-, 30- and 40-something men. That accounts for the mega-sales of sex-boosting drugs like Viagra and Cialis. Performance anxiety contributes to ED, just as it does to premature ejaculation. Sexual experience can improve ED in many young men.

American men are in the throes of an ED epidemic, largely because of an upsurge in obesity, physical inactivity and poor metabolic health. What most guys don’t understand is that small lifestyle changes can do more for your sex life than a reservoir of erection-promoting pills. A two-year study at the Cologne University Medical Center found that putting men with erection problems on an exercise program was just as effective for improving erection capacity as taking Viagra. Eighty percent of the men who exercised reported better erections, compared to 74 percent on Viagra and 18 percent taking the placebo. The exercises attempted to increase blood flow to the lower body muscles. Erection strength increased by 46 percent in three months after the men started the exercise program.

Erection problems often stem from abnormalities in the cells lining the blood vessels. Healthy cells secrete a chemical called nitric oxide, which is very important for delivering blood to the penis – and the other body tissues. Blood vessels of obese, out-of-shape men lose their capacity to control blood flow and get healthy erections. Excess abdominal fat is a sure sign of poor metabolic health and impaired nitric oxide function.

Abdominal and gut fat also reduces blood testosterone levels, which decreases sex drive, the capacity for erections, energy level, aggressiveness and self-confidence. Too much fat is a double whammy: low testosterone destroys your game and sexual performance goes down the drain.

Poor Fitness. Those love handles your old girlfriend thought were cute when you were 18 turned into a sexual liability in your late 20s and 30s. The problem goes deeper than occasional difficulties with erections – blood flow restrictions affect your energy levels and your desire for sex. Like men involved in any physical activity, sexual athletes must work hard to achieve maximal performance. Focus on sex and think of nothing else. This is impossible if you have lousy blood flow control.

Sex stresses the muscles beyond their general effects on metabolism. Masters and Johnson, the famous sex researchers, found that during the excitement phase of sexual intercourse, there’s usually extreme muscle activity in the large muscles of the legs and arms, along with involuntary tensing of the stomach muscles and increased activity of the breathing muscles. They noted that having sex to orgasm several times often leads to severe muscle aching of the arms, legs, back or lower abdomen the next day. Researchers have likened the physical stresses of orgasm to a runner straining at the finish line.

Obviously, there’s sex and there’s SEX. Wild sexual gymnastics can pose a major physical load, particularly if done over several hours. When sexually aroused, people may attempt and accomplish feats of muscular performance that would be unattainable in sexually unstimulating states. The result is much like doing any new activity. For example, when you go water-skiing, your arms may hurt the next day because you aren’t used to the activity. Likewise, when you perform some crazy stunt in bed, you may get sore muscles because you assume positions you would never achieve in a normal workout.

The take-home message is to get in shape for good sex. A general fitness program, including cardio, weight training and flexibility exercises, will improve your appearance and build metabolic health for peak sexual performance.

Poor Sexual Savoir Faire. It’s no secret that men and women have different sexual mindsets. Billy Crystal summed it up very well with his line from the movie City Slickers: “Women need a good reason to have sex with a man; all men need is a place.” Women are sexual beings just like men, but their motivations and goals are different. Men see sexual activity as a worthy goal by itself, while women integrate sex with love, emotional intimacy and involvement. Removing emotional involvement from sex destroys arousal in most women.

Many men believe that a woman’s disinterest in sex is a pathological sign of frigidity or female sexual arousal disorder. In fact, she may be turned off about sex because she’s stressed and afraid, finds her partner unattractive or is unsure or disconnected in her relationship. Sexual arousal may be a snap in other circumstances, such as when she finds her partner sexy and desirable, or she’s been fantasizing about making love.

The best measure of low sex drive and sexual satisfaction in women is psychological problems and lack of emotional connection with their partners during sex. Masters and Johnson said that women begin their sexual response with desire, leading to arousal, orgasm and then satisfaction of the initial craving. Scientists now see the female sexual response as a far more complicated process that requires a combination of physical changes (increased vaginal blood flow and lubrication, elevated breathing and heart rate, uterine contractions, etc.) and imagination.

Sexual arousal is more cerebral in women than men. Men are loin driven, while women respond better to symbols and fantasy. The arousal-triggering mechanism is highly variable from one woman to the next. Not all women are turned on by the same type of guy. Also, women change their criteria for sexiness from one day to the next, depending on whether they’re in the market for a relationship or short-term sexual satisfaction. They want a man who’s sensitive, but not a milquetoast wimp. Some women want a sensitive man with a masculine edge, such as a guy with a good body or someone who’s sexually aggressive. Other women find men with money and power sexy. A guy can be all hat and no cattle and still be sexy if he has good presentation.

Sometimes, the only way to spice up a woman’s sex life is to revamp her connection with her significant other or start a new relationship. In long-standing partnerships, many women have trouble being aroused by men who they no longer consider attractive. As one therapist said, “No drug will cure a woman who hates her husband.” Improving sexual satisfaction has proven more difficult in women than in men.

You can maintain a healthy sex drive throughout life by maintaining a close relationship with your partner. Dysfunctional sex typically comes from emotional pain and isolation stemming from unfulfilled expectations. Sexual problems are often routed in our Puritan heritage, which gives people general fear and anxiety about sex, or from sexual abuse or prudish views. These deep-seeded sexual problems may be difficult or impossible to abolish, even with counseling.

You can increase sexual enjoyment by catering to a woman’s emotional needs, which are integrally related to her sexual enjoyment. Good sex is more than a contact between the penis and vagina. It involves interaction on physical, psychological and spiritual levels.