Science can help you get laid this weekend. Forget about flowers, candlelight dinners, and soft guitars. Appeal to her animal instincts that have been programmed in her genes through millions of years of evolution. Women instinctively want a guy who will produce strong children and stay around long enough to raise them. They have a remarkable natural ability to judge sexual vitality, testosterone levels, sperm health, and personality just by looking at you. You can be the nicest guy in the world but won’t get to first base if you don’t have the right body type, facial contours, or attitude.

Scientific studies of men and women around the world show remarkably similar results: women like hard-bodied hunks for a quick roll in the hay, but want serious but fit men as husbands. They know instinctively that the extremely muscular guy will be better and more exciting in bed, but will probably be unreliable and unfaithful. Women are willing to settle for a guy with a less-than-perfect body as long as he is a good provider and will be there for the long haul. 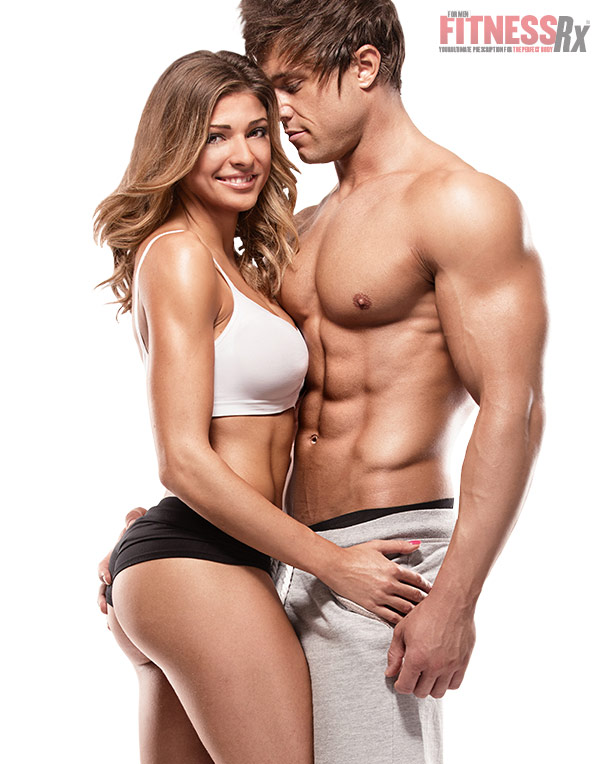 UCLA psychologists David Frederick and Martie Haselton found that moderately-muscular men had more sex partners (8 versus 4 for less-muscular men), more affairs with women involved in relationships (2 versus 1), and more short-term flings (7 versus 3). Modern women are very demanding, but they cut muscular men some slack. Sixty-one percent of women said their short-term partners were more muscular than their long-term partners, while 70 percent said their less muscular long-term partners were more trustworthy and romantic. Women do not expect as much from muscular men when choosing them for sex. Women perceive muscular men as genetically stronger, but less reliable. They see less muscular men as more nurturing and committed to relationships and raising children. They compromise between the two types of men when choosing a mate.

Are Your Genes Keeping You From Getting Into Her Jeans?

Men spend nine months trying to get out of a woman’s body and the rest of their lives trying to get back in. Gyms are full of men trying to up their “sexual quotient.” Why do guys lift weights? Do you think they pump iron to prevent a heart attack when they’re 60, strengthen their bones to avoid fatal falls at 80, or boost blood sugar metabolism at 30? Of course not! Building muscles make them more attractive to women.

Most guys emphasize the bench press and arm curls because big arms, chest, and shoulders make guys look sexier to women. Squats, cleans, and snatches are more functional exercises for sports and general movement, yet few men do them. Men know that women like guys with fit, athletic bodies. Building shapely muscles is a way that men compete with each other to attract women’s attention.

Scientists discovered that genes and brain chemistry are at the center of attraction, love, and lust. Women’s genes are programmed to respond to muscular men. A fit-looking body is a biological cue that the man will produce healthy children and will be reproductively successful. Hormones, nerve synapses, and brain pleasure centers dictate our choice of mate, sexual turn-ons, and social behaviors.

Sexual arousal is largely involuntary and similar to other biological drives such as hunger and thirst. These genetic controls evolved to trigger human reproduction and ensure the development of strong, viable children. They also promote social behaviors, such as flirting, sexual aggressiveness and restraint, and the desire to increase physical attractiveness (e.g., lifting weights and wearing stylish clothing) that help people pursue and win their preferred mate. Hormones such as testosterone, vasopressin, dopamine, and serotonin interact to promote feelings of love and mating behavior.

In terms of evolutionary biology, women are naturally attracted to muscular men because building muscle takes extra energy. In the animal world, the most sexually desirable males are those with the most beautiful feathers, mains, and tusks. Developing these features takes extra energy and shows the female that her chosen mate has plenty of energy to spare for reproduction. In humans, the degree of muscularity depends on testosterone. For example, Dr. Tom Storer and colleagues from the Drew Medical College in Los Angeles found that the capacity to increase strength and muscle mass were directly proportional to blood testosterone levels.

In the UCLA study, muscularity and body fat were extremely important in ratings of sexual attractiveness. On a nine-point scale, women rated ‘built’ and ‘toned’ men slightly more desirable (6.97 and 6.87) than brawny men (i.e., competitive bodybuilders; 6.37). Slender and typical men scored lower than more muscular men (5.42 and 4.28). Chubby men were the least sexually-desirable (2.95) and were rated more than 50 percent less desirable than muscular men. Brawny men rated higher in physical dominance and volatility but lower in commitment than other body types. Chubby men rated highest on commitment (5.9 vs. 4.02 for brawny men).

Fat is a sexual turnoff for women and men. Most people are overweight or obese, yet men and women rank fat people at the bottom of the sexual attractiveness scale. According to psychology researchers from the University of Washington, most women would rather go to bed with a mentally ill man or one with gonorrhea than with a fat guy. Male and female college students were shown six photos of possible sexual partners with the following characteristics: lean and healthy, armless, wheelchair-bound, mental illness, STDs, or obese. Women found obese people the least sexually-desirable of potential partners on the list. The results were similar in people who were overweight themselves. The study showed the importance of a good body for sexual attractiveness.

It’s best to be muscular and lean if you want to arouse women. Buff, athletic guys get more short-term action than skinny or fat guys. However, muscularity and athleticism are less important in long-term relationships. Fatter and less muscular men fair better than extremely muscular men in relationships that women describe as romantic, trusting, and emotionally close. 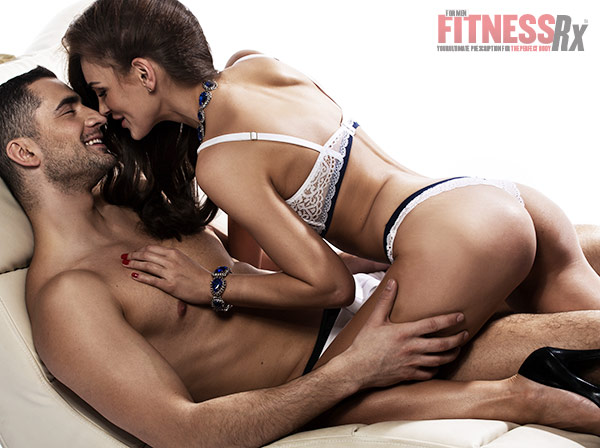 What Do Studies on Female Arousal Tell Us, and How Can We Use This Information to Get More Sex?

Lean, physically fit men have more sex. Stuart Brody, from the University of Tubingen, Germany found that thinner men under age 40 had more sexual intercourse, while fatter men (and women) masturbated more. Physical problems leading to bad sex also had emotional side effects that made the problem worse. Excess abdominal fat makes you less attractive to women; but the problem is a lot more serious than that. Gut fat reduces blood testosterone, which decreases sex drive, the capacity for erections, energy levels, aggressiveness, and self-confidence. Too much fat is a triple-whammy threat: women find you less attractive, low testosterone destroys your game, and sexual performance goes down the drain.

Small lifestyle changes, such as regular exercise and having more sex, can do more for your sex life than a boatload of erection-promoting pills. Most people want it easy; why exercise if you can get the same results from a pill? Cure the cause of the problem— poor metabolic health— and you will improve sexual performance, achieve harder erections, and look better in bed at the same time. You won’t need drugs like Viagra that may have side effects.

Lose body fat! Women scored fat guys high on commitment, but that’s about it. You can get away with an average body, but you can’t be significantly overweight or obese if you want to stimulate women’s sexual arousal genes. A combination of exercise and a reduced-calorie diet works best for losing fat.

Testosterone is a turn-on. Testosterone builds muscle, so it’s hard to fake it if you don’t have it. However, you can act like you have a lot of the hormone flowing in your veins. Be assertive and aggressive. Women have a built-in ‘wuss detector’ that identifies men with small cajones, but you can fool them with attitude.

Lift weights: It is not necessary to look like Mr. Olympia, but adding an inch or so to your arms, chest, and shoulders will increase sex appeal points. If you are overweight, developing a football player body is far more sexually alluring to women than looking like a skinny distance runner or Moby Whale. Do aerobics to cut fat, count calories, and lift weights to build muscle.

Think like a winner. Mental state has a profound effect on testosterone levels and on women’s perception of sexuality and desirability. Studies in athletes found that testosterone levels go up after winning an athletic contest but go down after a loss. Assertive behavior followed by a rise in status leads to an increase in testosterone. Likewise, depression lowers testosterone. Symptoms of depression include low self-esteem, reduced mood, fatigue, low sex drive, insomnia, feelings of guilt, poor exercise and sports performance, and absence of pleasure.

Confidence is critical for peak sexual performance. Men who are unsure about their capacity for erections generally have poor sexual confidence, which causes anxiety and creates a vicious cycle that sends them into the sexual doldrums. A study from the Case Medical Center in Cleveland showed that Cialis improved erection confidence by 73 percent in men with ED. Cialis increased erection frequency, firmness, and maintenance and gave them the confidence to have sex more frequently. Erection-promoting drugs such as Cialis and Viagra improve sexual performance by boosting the capacity for action and increasing sexual confidence. These drugs have both physical and psychological benefits for men with ED. Physical fitness improves sexual performance but erection-promoting drugs help, too.

What can you do? If you are depressed or have erectile dysfunction, see your physician. Nowadays, there are many effective treatments for these disorders. If you occasionally have down days (and who doesn’t?), develop a winning mental attitude. Set yourself up for positive, winning experiences.

A good strategy used by successful football coaches is to schedule some games he knows the team can win. In life, set achievable short-term goals and knock them off one-by-one. Even the pros don’t play in the Super Bowl every week. Give yourself a break and conquer the ladder of success slowly but surely. You will be rewarded with a full tank of testosterone, a positive winning attitude, and an army of aroused women.