When you say “fake meat,” you may mean meat alternatives like the Beyond Burger™. Maybe you saw the recent headlines that one of “Beyond Meat’s key factories was reportedly riddled with mold, bacteria and other health-related concerns, according to leaked evidence provided by a former employee.1 The documents revealed the “products manufactured at the plant had tested positive for the harmful bacteria Listeria at least 11 times in the second half of 2021 and the first half of this year.” These revelations extend Beyond Meat’s problems,2 as the company just settled a federal case accusing it of inflating its protein content claims.3 While quality control failures can occur with any food, the irony here is that many consumers who chose these products did so believing that they were enhancing their health over conventional options. For those eating fake meat purely for environmental concerns, the actual extent to which methane emissions impact climate change might be overstated.4

Whether the nutritional profile of plant-based products is superior to the meat of an animal is open to debate.5 “The term ‘plant-based’ is more about marketing than health, as many of these products are ultra-processed,” says Dr. Gabrielle Lyon, founder of Muscle-Centric Medicine.6 “Also, while you can get all the amino acids you need from plants, you’ll need to eat more total protein and more total calories. Beef is a nutritional powerhouse in a smaller package than other protein foods, and full of iron, zinc and B vitamins.”

Now, the big news: plant-based fake meat may soon not be the only alternative to farmed animal meat. The U.S. Food and Drug Administration has announced that lab-grown meat is “safe to eat.”7 After considering whether to allow the sale of this new, novel “meat” cultured in a laboratory from the cells of an animal rather than cut from the animal itself, the FDA has greenlighted the technology for companies to begin making the products. Is America ready for lab-grown products that look and taste like meat from animal flesh? An informal poll of my fitness-minded followers on social media found that most wouldn’t touch it with a 10-foot fork. But a general public poll found that 67 percent would happily dig in!8 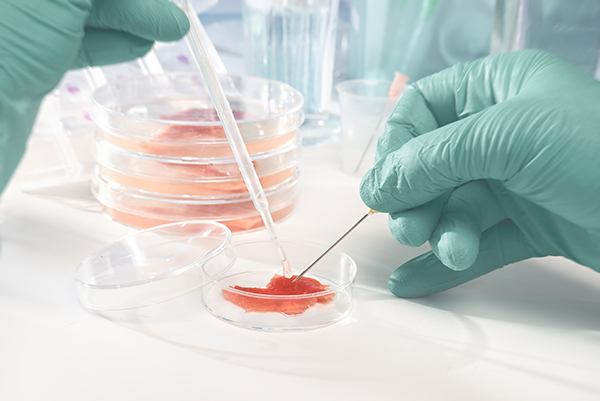 Dr. Doug Kalman9 is a Registered Dietitian and Faculty in the Dr. Kiran C. Patel College of Osteopathic Medicine at Nova Southeastern University in Fort Lauderdale, Florida, and Dr. Chris Lockwood10 is a sports nutrition and protein science expert who serves as VP of Scientific Affairs for Nutrabolt. Both have supervised clinical trials published in the scientific literature on issues involving nutrition safety. While Dr. Kalman generally supports advancing technologies to produce foods from non-traditional sources, he notes that there are “Federal requirements for determining and demonstrating safety before a food additive or new ingredient for foods can go to commercial market. With cell-based and lab-based meats (proteins), it seems like either companies are going to market way too fast or there may not be enough communication between FDA and industry. I would like to see the safety dossiers of cell-based proteins be made public and undergo greater scrutiny than what appears now.” At a minimum, Dr. Kalman suggests that “the same level of safety studies needed to get a new food additive or new dietary ingredient to market should apply here.”

Dr. Lockwood analogizes lab-grown meat to fake whey. “The finished product that’s marketed doesn’t provide the same complement of proteins typically present within mammalian whey,” he cautions, “and the fake whey is a wholly synthesized, genetically modified organism (GMO).” He’s “aware of no research or literature validating the efficacy and safety of these fake proteins compared to their natural competitors. If fake protein suppliers want to market their wares using the existing data of their natural competitors, then they should fully disclose that their finished products aren’t identical to the real thing nor has any short- or long-term research been performed to evaluate the safety and efficacy of these products when compared to the real thing.” Further, he points out that the massive amounts of energy required to make fake proteins, whether claiming to be “whey” or “meat,” produce lots of toxic waste, “an environmental cost conveniently hidden from naïve consumers by focusing only on selective comparisons to food production competitors, such as methane gas emissions (e.g., no farting cows). The true carbon footprint of fake meat is still unclear, just like the product’s true safety profile.”

Public poll notwithstanding, it seems like more Americans today are questioning whether we can rely on the government about the safety of things we put into our bodies. Only time will tell whether the FDA is correct that lab-cultured meat is safe. For now, I’ll take a pass.

Rick Collins, Esq., CSCS [https://www.rickcollins.com/] is the lawyer who members of the bodybuilding community and dietary supplement industry turn to when they need legal help or representation. [© Rick Collins, 2021. All rights reserved. For informational purposes only, not to be construed as legal or medical advice.]