Everyone who has gone trick-or-treating as a child has experienced a “sugar high” after overdosing on fun-sized Snickers and Pixy Stix. Shortly thereafter, a self-induced insulin coma results; sugar’s effect on the endocrine function of the pancreas is clear and immediate. The graphic association between sugar intake and insulin is so blatant that it has blinded researchers to possible effects on other endocrine axes, such as the production of testosterone.

Testosterone is by no means the only hormone involved in muscle hypertrophy and function, but it is a dominant factor. Natural bodybuilders seek to maximize the function of the hypothalamic-pituitary-testes axis to generate as much endogenous (natural) testosterone as possible. Dietary choices, training style, sleep pattern, supplementation and other factors affect the production of this anabolic hormone. Among the earliest dietary supplements is the sugar D-glucose, also known as dextrose. Dextrose is a single sugar (monosaccharide) and when linked in a sugar chain— either straight or branched— it is a starch (polysaccharide, such as maltodextrin). As mass gain is one of the most difficult components of weight training for many lifters, sugar-laden powders and drinks were best-sellers for decades. 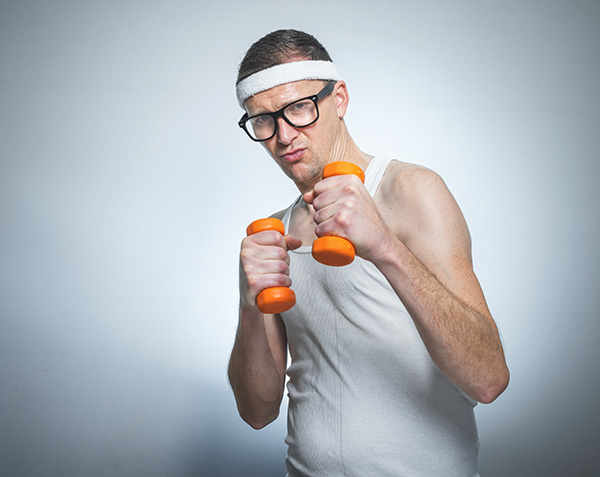 In addition to weight-gainer shakes, comically spoofed in the “South Park” episode “Weight Gain 4000,” pre-workout drinks entered the market. Based upon the needs of endurance athletes, rather than strength athletes, these drinks provide a quick boost of sugar to elevate blood glucose during prolonged exercise. Unfortunately, this can be counter-productive to some weight-training goals. It does potentially protect against muscle breakdown during exercise, but at the expense of inhibiting fat burning. It is probably a testament to Barry Sears and his Zone Diet that America became sensitive to sugar (even as they were becoming insulin resistant, ironically). The current line of pre-workout drinks tends to focus more on stimulant properties (e.g., caffeine) rather than sugar to elevate workout intensity.

A few studies have looked at the relationship between fasting and non-fasting conditions on testosterone concentration. Postprandial (after a meal) testosterone drops about 15 to 40 percent, but the meals varied in size and content.4-6 Higher fat resulted in lower testosterone, though one study suggested that it may be due to cellular uptake of testosterone rather than reduced production in the high-fat meal conditions.6 Three small studies using glucose-laden drinks showed a decrease in testosterone of 10 to 30 percent, suggesting the carbohydrate component holds a substantial part of the blame.7-9 In judging whether it is the sugar or the insulin surge that accompanies sugar intake, the authors noted that prior studies showed insulin increases the hypothalamic “go” signal GnRH, the pituitary hormone LH (luteinizing hormone) that directly stimulates testosterone production, as well as the Leydig cells themselves through a direct action.1

So it seems that it is not insulin that drops testosterone levels (actually, it raises them in people with normal insulin sensitivity). Rather, sugar is the bad player.

So, how bad is sugar? We now know, thanks to researchers from the eminent Massachusetts General Hospital, along with Swiss colleagues.1 After an overnight fast, 74 men (aged 19 through 74) were given an oral glucose tolerance test consisting of 75 grams of glucose in a rapidly consumed drink. Blood samples were taken immediately before drinking the solution, as well as every 30 minutes for the next two hours— glucose, insulin, testosterone (total and free), SHBG (sex hormone-binding globulin) and leptin were measured. Roughly half of the subjects were normal weight to overweight, while the other half were obese; most had normal glucose tolerance (57%), 30 percent had impaired glucose tolerance; 13 percent were newly diagnosed with type 2 diabetes when being screened for the study; eight had low testosterone (less than 280 ng/dL— a very conservative cutoff).

After consuming the sugary drink, total and free testosterone dropped in subjects significantly; the binding protein, SHBG, was unchanged. Interestingly, the pituitary hormone LH, which should have increased in reaction to the dropping testosterone values, was unchanged. The drop in testosterone was severe enough to plunge 10 of the men with normal starting testosterone measures into the hypogonadal range. The greatest drop in testosterone appeared between 60 and 120 minutes after the drink, lowering testosterone by an average of nearly 25 percent (a 47% decrease in the most affected subject!) from the first measure. This is consistent with the findings of the three prior, smaller studies looking at the effect of sugar intake on circulating (blood) testosterone concentration.

The direction the authors take is that testosterone values should be measured in the morning, using a fasting sample— providing the peak concentration of the hormone for laboratory measure. This, they feel, would reduce the number of samples with low testosterone. Apparently, it is appropriate to manipulate the physiology of the patients to obtain the highest point during the day to disprove a diagnosis of hypogonadism— rather than be more sensitive to the effect that abnormally low testosterone, even if only for a few hours of the day, has on a man’s health and quality of life.

This is an opinion point rarely argued by physicians, but it would be no different than measuring the fasting glucose of a diabetic. Testosterone values measure a moment in time, rather than the condition of the patient. In diabetes, fasting glucose is of little value (other than acutely dosing insulin in defined ranges); instead, a long-term value called hemoglobin A1C is used. It is similar to tracking IGF-1 instead of growth hormone in anti-aging practices. There is no accepted long-term marker for testosterone, hence the dependence upon the immediate value of serum testosterone. More than a century after the discovery of testosterone, and medical science is treating and diagnosing androgen deficiency with little more sophistication than the antiquated practice of tasting urine to diagnose diabetes.11

Hopefully, the day will come when clinicians will not be avoiding the diagnosis and treatment of androgen deficiency. Blood measures aside, the goal should always be to treat the patient and not the labs. This should serve as a wake-up call: avoid binging on sugary drinks and candies, especially pre-workout.