Anavar® contains efficacious dosages of several key anabolic compounds, including three of the most potent anabolic compounds ever researched by Russian scientist V.N. Syrov and his team of colleagues, who are responsible for many of the greatest advances in herbal-based nutraceutical sports nutrition. These interesting compounds are 25R, spirostan-5a-diol-6-one-3-one (Ecdybolin™) (which demonstrates a 33:1 anabolic to androgenic ratio), the 6-keto derivative of diosgenin (6-keto-diosgenin) and 20-hydroxyecdysone decanoate, isolated from Rhaponticum carthamoides extract. These three compounds are structurally and biochemically close cousins. They have been shown to significantly enhance protein synthesis void of any androgenic pathway activity, which makes them exceptionally desirable to bodybuilders and strength athletes. In fact, athletes from Russia and other Eastern Bloc countries have been incorporating these powerful compounds into their arsenal of anabolic agents for nearly 40 years. For additional anabolic thrust, and also for a pronounced boost in anti-proteolytic (protein-sparing) activity, Anavar® incorporates several esters of Androstenolone, one of the most powerful legal prohormones available.

Anavar® also incorporates a three-pronged unconventional delivery system called “controlled-release bead technology.” To put it simply, this new system allows the special hormones and compounds in Anavar® to remain intact and protected while in the stomach. When the tablet is in the “safer” part of the gut (upper intestine), the nutrients begin to be released into the system and continue to be released steadily over a two- to eight-hour period. With this type of controlled-release delivery, testosterone levels could be elevated for up to eight hours by a single dose of Anavar®. Current tablets or capsules bioavailability of Androstenolone and Androsterone is approximately a mere 1.5% to 4%. This means that a 150mg capsule of Androstenolone would only deliver 2.25-6mg biologically active milligrams, which is less than your body naturally produces daily. Conversely, a single dose of 150mg Androstenolone in Anavar® delivers between 30-42 biologically active milligrams. The differential is colossal.

Androstenolone esters, which converts to Androstenedione then to Testosterone, exhibit strength and lean mass gains while Androstenolone esters are extremely rare prohormones that convert slightly to DHT – which exhibits increased aggressiveness, improves libido, promotes a positive energy balance and has a known muscular hardening effect. Hi-Tech researchers were the first to begin to use these potent compounds – long before the recent steroid laws were revamped to add almost every prohormone known to be a controlled substance. Therefore, Hi-Tech’s technology to getting the powerful prohormones into the bloodstream by far surpasses any other company in the industry. Hi-Tech has worked on different technologies for over a decade while everyone else enjoyed the fruits of selling illegal compounds. Now that Hi-Tech is on a level playing field with their competitors, there is no comparison in the effects achieved by products like Anavar® when compared to people who are just trying to put any product out to have a product in the marketplace without any concern for its efficacy.

• Elevates Testosterone Levels Throughout the Day 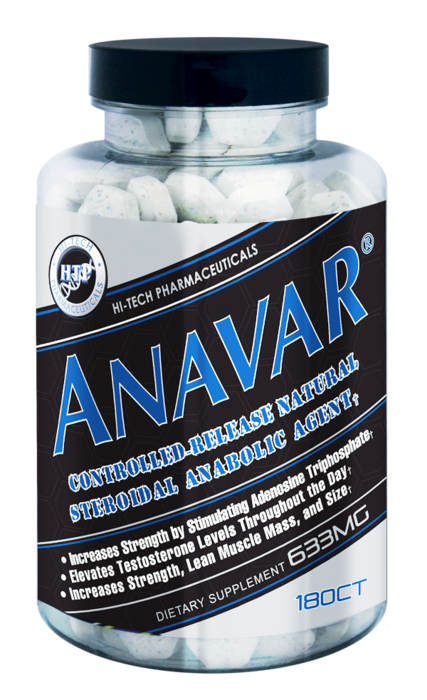