Winstrol® is the ultimate cutting agent by speeding up metabolism and heat production to promote lean body mass and muscle development.

Winstrol® is the newest anabolic prohormone designed by Hi-Tech Pharmaceuticals – the worldwide Leaders in Prohormone research and design. Winstrol® is based on several prohormones that work synergistically to help build lean body mass. Its primarily use in bodybuilding is during “cutting cycles” to help preserve lean body mass while metabolizing adipose tissue. Winstrol® also promotes increases in vascularity, and in most men, does not convert to estrogen. The anabolic effects that are achieved when using this prohormone are due to its ability of increasing protein synthesis and nitrogen retention. Ever try to lose fat and keep hard-earned muscle? Prior to the release of Winstrol® it was incredibly difficult to achieve. The reason is that it’s difficult for the body to do so is that cortisol breaks down muscle to make energy, which can lower strength, retard muscle hypertrophy and slow metabolism. The end result is that you lose weight, fat and muscle.

The primary compound in Winstrol® is called 25R-Spirostan-22a-O-3b-5a-6b-triol, a “SuperLaxogenin™” compound. This amazing “Hi-Tech exclusive compound” is actually the 6-Hydrogen reduced form for 5alpha-Hydroxy-Laxogenin giving this compound strong bioavailability – approximately 5-10x more bioavailable than 5alpha-Hydroxy-Laxogenin according to our initial trials, and 25-50x more bioavailable than Laxogenin! The difference in action of 25R-Spirostan-22a-O-3b-5a-6b-triol between it and other anabolic agents reveals that the latter goes directly to the nucleus of a cell to tell the blueprint, the DNA, to produce more RNA. Then the RNA tells the ribosome to produce more protein. 25R-Spirostan-22a-O-3b-5a-6b-triol, on the other hand, goes directly to the ribosome and increases what is called translation, the rate at which new protein is being made. It does not increase transcription, the message sent from the DNA; it accelerates translation, or direct protein synthesis. It has been shown to increase protein synthesis by as much as 200%.

Winstrol® is being widely used not only by bodybuilders but also by non-bodybuilding athletes such as runners, cyclists, football players, soccer or hockey players and fighters of all kinds (MMA, for instance). Many of these athletes are looking for a product like Winstrol® that helps you potentiate speed and quickness without gaining a lot of extra weight because it provides you with lean mass and improves your strength without gaining excessive muscle tissue nor water gain. It provides a rather moderate amount of lean and dry mass, which preserves after the cycle is over.

The second compound found in Winstrol® is 3Beta-hydroxy-5alpha-androstan-17-one, which is a precursor to Stanolone, a powerful hormone. Epiandrosterone does not aromatize to estrogen, and it is especially good for strength gains, muscle density and definition, which makes it great to use during a cutting cycle. One additional benefit of 3Beta-hydroxy-5alpha-androstan-17-one is that it appears to have some immediate neurological effects, so having a dose pre-workout can aid in strength and aggression during training. Another secret is its ability to bind to SHBG (sex hormone binding globulin), leading to a greater ratio of free testosterone to total testosterone.

Winstrol® represents the first prohormone used not only for mass gains, but more is aimed at acquiring a hard and lean appearance with athletic speed. Due to the lack of water retention, users with comparatively low body fat can achieve a dry look to their physique. Winstrol® is incredibly anabolic, which provides a prohormone that offers significant results without many of the side effects associated with its more androgenic cousins. For example, whereas many prohormones convert to estrogen in the bloodstream, Winstrol® typically does not.

Winstrol® is the ultimate cutting agent by speeding up metabolism and heat production to promote lean body mass and muscle development and increasing the activity of the thyroid gland. What separates Winstrol® from all other fat-reduction supplements is that it’s a hormone that adjusts and/or mimics the body’s own natural hormonal strategies that encourage fat loss and contains no stimulants. 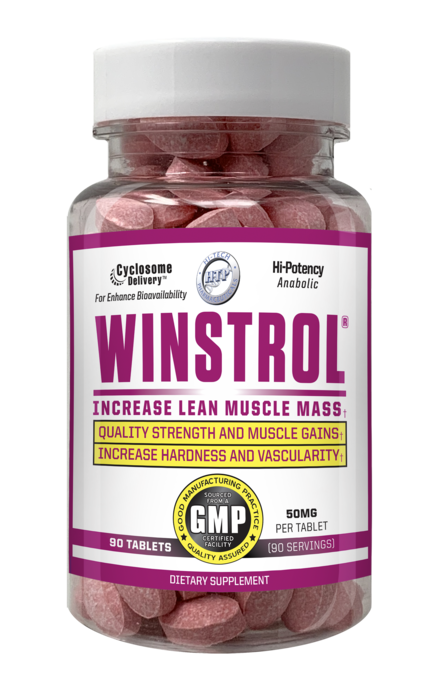