Skip to content
FitnessRX for Men > News > “The Hurt Business” Takes a Deeper Look Into MMA
Share This!

“Generation Iron” was a critically acclaimed 2013 film that revolutionized the way the public perceived bodybuilding, a watershed moment in the tradition of “Pumping Iron” that allowed mainstream audiences to see the deeply human struggle and tremendous effort and dedication that goes into preparing for the Mr. Olympia contest. “Generation Iron” was a story of dedication, rivalry, victory, defeat, redemption and triumph that left an impact on bodybuilding, garnering increased respect for the industry and its competitors. The Vladar Company plans to do the same thing for mixed martial arts (MMA) with its follow-up film, “The Hurt Business,” which opens in theaters on September 29. 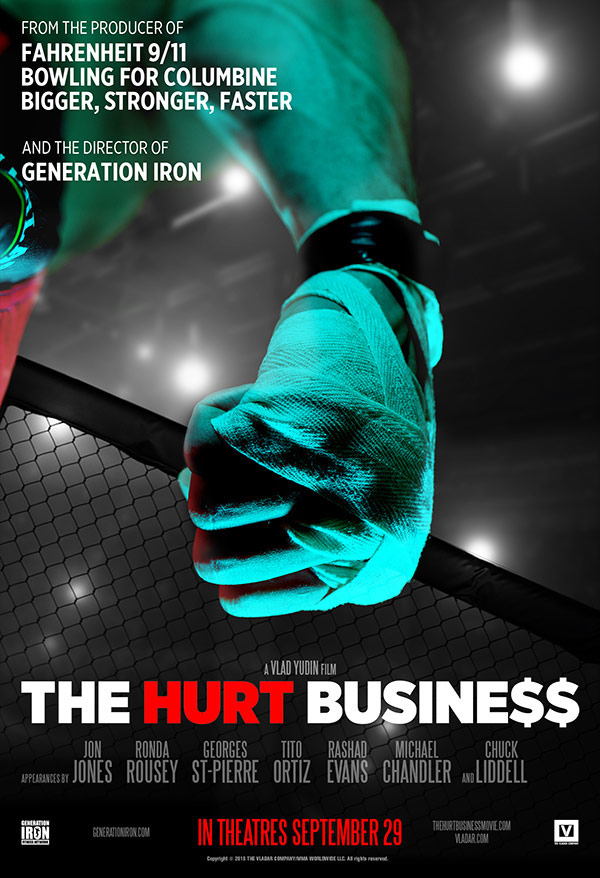 Directed and penned by Vlad Yudin (“Generation Iron,” “Jeremy Scott: The People’s Designer”) and helmed by Yudin and Edwin Mejia of The Vladar Company with Oscar-winner Jim Czarnecki (“Fahrenheit 9/11,” “Bowling for Columbine”), “The Hurt Business” extends beyond the octagon and takes a deeper look into what life is really like within the world of MMA. The film details the lives of martial arts superstars, including Ronda Rousey and Jon Jones, competing in one of the fastest growing sports in the world— and the struggles and triumphs that accompany all careers in cage fighting.

“It’s an exploration of the world of MMA— where it came from, how it started in this country and how it’s evolved to become mainstream, and is now considered the fastest growing sport in the word,” Yudin explained. “It’s also an exploration of the athletes who participate in the sport; a very in-depth and intimate look at their lives and profession.”

The film also features other top names in the sport including Chuck Liddell, Tito Ortiz, Georges St-Pierre, Kenny Florian, Urijah Faber, Ken Shamrock, Bas Rutten, Josh Barnett and many more. Through the telling of their experiences, the complete history and culture of MMA is explored in a more expansive way than ever before. “The Hurt Business” covers the history of MMA fighting, from the coliseums of ancient Greece to modern-day venues such as the MGM Grand in Las Vegas, all expertly narrated by Kevin Costner.

One of the questions addressed by “The Hurt Business” is: Is it worth it to sacrifice one’s mind and body for sport? “The Hurt Business” includes feedback from leading psychologists, neurologists and sociologists as well as government officials, who analyze the grim prevalence of brain trauma and the implications of MMA’s increased popularity, and what it means for our society. “The Hurt Business” examines how a sport that has until recently been illegal and referred to as “human cockfighting” became accepted, and even glamorized by the mainstream culture.
“The film provides a greater understanding of the inner workings of MMA; how it originated and the practices that developed in different countries throughout history,” Yudin said. “The sport looks gruesome and there are concerns about brain damage and violence, but ‘The Hurt Business” presents a balanced look at the sport of MMA by also looking at positive developments such as the improved treatment of athletes and how the sport has progressed and grown. It’s a very objective look at the sport— the good and the bad.”