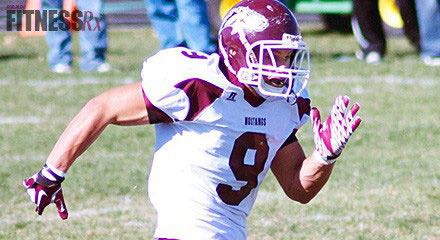 Special athletes have a certain intangible that cannot be measured in statistics. It doesn’t show up on the 40-yard dash time clock or the offensive and defensive numbers at the end of a football game, but it is definitely recognizable while observing a game, scrimmage or even a practice.

Some use the fancy saying of having the ‘It’ factor, but it really boils down to heart and gumption. Being able to play through pain – especially in a sport where that is commonplace – is a good measuring stick to see if someone has what it takes to be placed in that elite category, and Adam Wademan has passed more than one of these tests while engaging in war on the 100-yard battlefield known as the gridiron.

“During my freshman year (2009) at Morningside College in Sioux City, Iowa, I fractured my disk in my L5 vertebrae,” the 5’11”, 190-pound defensive back said. “I fought to come back from that injury throughout the summer and started playing again in camp that fall.”

Two years later, Wademan’s team was part of a conference championship and he played part of that campaign with a broken wrist, which was unbeknownst to him at the time. “During the season, I injured (it) and had an x-ray a few days later,” recalled Wademan. “It came back negative because the swelling covered up the fracture and I didn’t actually get an accurate diagnosis until December of 2012.”

Even during the time his wrist was healing, Wademan kept training and never took any time off. “I feel that I have a tough mentality and being optimistic has helped me fight through the pain and now I hardly even notice it,” he concluded.

Having success in athletics has been a constant with Wademan, as his high school team won two state championships. In four short years, he has transformed his body from being one he describes as a “skinny kid” to an aspiring fitness model.

Somehow, it seems his chances are pretty good of that also becoming an accomplishment.