Anyone can improve his or her upper chest if they apply concentrated effort and think outside the box of traditional chest training.

It’s one of the great ironies of weight training. The one day no man ever skips, and the favorite training day for many from early teenage years all the way to middle age and beyond, is chest. Yet when you take a good look at the pectoral development of the average serious weight trainer, there aren’t many chests that would be considered even above average. Of those that have managed to build significant thickness to their chests, only a fraction have complete development from top to bottom. The typical mass distribution tends to be greatest at the bottom portion of the pecs above the sternum and ribcage, and rapidly flattens out as you approach the collarbone. It’s just not a good look. When you stop and think about some of the best chests of all time, men like Arnold Schwarzenegger, they all had upper pecs that were thick as bricks, almost scraping their chins in a side chest pose. A bottom-heavy chest can almost give the appearance of breasts, whereas a dense, full upper chest to match is more reminiscent of a Roman Legionary’s armored breastplate. Many lifters I have spoken to have expressed their desire for a better chest, but they have consigned themselves to defeat after failing to develop the area. I’ve heard that upper pecs are “all genetic,” much like calves, forearms and bicep peaks. I don’t buy into that excuse for one minute. Anyone can improve his or her upper chest if they apply concentrated effort and think outside the box of traditional chest training. With that in mind, let me help you beef up your upper chest starting today.

Let me start off with some tough love. The reason most lifters’ upper chests suck is the same reason their hamstrings suck: neglect. Sure, you do some incline work, but when? The pattern I see with so many guys in the gym is to spend the first third of their chest session on a flat barbell bench press, doing something like four warm-up sets and six working sets, often attempting a one-rep max at every workout. This is a habit many have carried on from their adolescence, when the amount of weight you could bench press was a marker of your manhood. I know plenty of men who are 40 and older who are still very much concerned about “how much they bench,” as if anyone cared. So they expend vast amounts of limited time and energy on the flat bench, then maybe move on to some seated Hammer Strength chest piece like the wide or decline bench press, where they can load up four or maybe five plates a side and feel like Superman. Taxed by this point, they finally get to some type of incline press. By then, they’re at least halfway shot, gassed, lacking the energy and motivation to do any real justice to that exercise. Then they complain that their upper chests won’t grow. The only solution to this situation is to prioritize the upper chest by training it first on chest day. Stop worrying about your flat bench press. If you happen to lose a few pounds off your max, so what? If you’re in the gym to improve your physique, that should take precedence. By hitting your upper chest first thing, you will at last give it the energy and focus it’s been needing all along. You will be shocked at how well it responds once you make this one critical change.

Change the Angles Up

For decades, we have been indoctrinated to believe that the only effective angle for incline presses is 30 degrees. Any steeper, and the stress shifts entirely to the anterior delts. It sounds logical, and few of us ever questioned this dogma. The thing is, it’s simply not true. Further, I am now convinced after years of experimentation that if you never press at an angle higher than the sacred 30 degrees, you will miss out on reaching the full potential of your upper chest development. I believe in pressing at 30 degrees, 45 degrees, and everything in between. The first time I set a Smith machine at 45 degrees, I was stunned to feel how much activation there was in my upper chest. Certainly the front delts were working too, but they are involved in any type of pressing movement regardless. The point is, why press from just one angle when you have other options available that can stimulate the target area in a slightly different way?

For years, I had been seeing athletes from sports like football and many “functional” trainers doing standing landmines with a barbell and thought, wow, that looks stupid. I confess, being closed-minded has caused me to miss out on many productive exercises and techniques over the years. I never would have given landmines a chance until my workout partner at the time, a 6-foot-5 tattooed bruiser named The Goon, showed me how he had figured out how to do them kneeling in front of a supported T-bar machine. It only took one set and I was sold. Though there technically is no such thing as an “upper, inner chest,” that’s exactly where I felt these. With both hands on the bar’s sleeve, you have the closest possible close grip, and the angle you press up at is right about 45 degrees. I could almost feel that inside area of my upper chest getting thicker with every rep. I find I get the best contractions with my elbows tucked in. It’s an ego buster, because I doubt even the strongest among you could get good reps with anything more than three 45s stacked on the bar, but good God, do these work well.

The Smith Machine and Hammer Strength

Someone, and it may have been the late Dan Duchaine in the old Muscle Media 2000, once wrote, “The Smith machine will keep you from turning pro.” I would argue that factors like average genetics, a poor work ethic, and the inability to listen to constructive criticism are all more damning against any given person earning pro status, but I understand the point he was trying to make. Free weights are harder to use in general than machines and are generally more effective at building muscle. The main knock against machines is that they don’t recruit the “stabilizer muscles,” since they remove the need to balance a weight as you push or pull it. To that I say, so what? Many of you are strong enough to push very heavy dumbbells or a barbell loaded up to 315 or more, but you simply can’t keep the weight balanced. Why should you miss out on loading your upper chest with as much resistance as it’s truly capable of, just because some hardcore snob looks down his nose as you if you dare touch anything but raw iron? I built most of my upper chest with incline dumbbell presses, but the Smith machine and Hammer Strength incline presses certainly played key supporting roles. And if getting heavy dumbbells up into the start position and struggling to keep them balanced is taking away from the effectiveness of your upper chest work, do not hesitate to use machines. Any type of building or construction is based on using the appropriate tools for the job at hand. You might find you’ve been banging your head against a wall using only free weights when there were more effective options in front of you the whole time. Machines allow you to focus on squeezing the muscle and keeping it under tension, and that could make a massive difference in your results.

We always think about doing pressing movements on an incline angle to emphasize our upper chests, but why do we seem to forget about that other function of the pecs, horizontal adduction of the arms? In other words, the flye motion, as seen in dumbbell flyes, machine flyes and cable crossovers. I’ve found the best way to target the upper pecs in this motion is to set up an incline bench between two low cable pulleys. Why not just do dumbbell incline flyes? I’m not a fan of dumbbell flyes in general, mainly because the vertical downward pull of gravity means you lose tension about halfway up toward the top of the rep. You want tension on your pecs as you squeeze them together, which would be a horizontal pull into the midline of your body. Dumbbells are always pulling down to the center of the earth. For that reason, only cables or a pec flye machine offer resistance along the full range of motion. I have seen a couple of machines that mimic an incline flye motion. If your gym has one of those, you’re golden. Otherwise, drag that adjustable bench over to the cable crossover station and get to work. 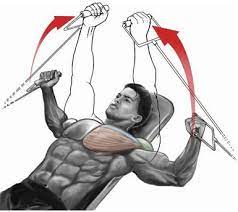 Though you’ve probably heard about the value of flexing and posing toward developing your physique, I bet many of you roll your eyes at the thought. What if I told you it actually works? Even if you’re not interested in the improved muscle separation and detail that intense, regular posing will give to a muscle, there is also the very real and immediate benefit of enhancing your mind-muscle connection. The greater your mastery of that neural conduit, the better you will be at forcefully contracting your muscles and feeling them fully stretch on every rep. It’s that critical distinction that separates bodybuilders, who train a given muscle group as intensely as possible, and the other 95 percent of people in gyms who lift weights, without a lick of thought going into the feeling inside their muscles as they do so. For your upper chest, I have a simple but highly effective flexing exercise you can start doing right now. Stretch both your arms out directly in front of you with hands together. They can be loose or in fists, it doesn’t matter. Next, squeeze your pecs together as hard as you can, trying to especially focus on that top shelf of upper pec below your clavicles. Hold that flex for a count of 10, rest for about 20 seconds, then do it again. Eventually you can work up to three static contracted holds of 30 seconds each. You can do these whenever it’s convenient, or save them for the end of your chest workout.