Whether you’re destined for greatness in athletics or you just like looking great at the beach, your success has been characterized by hard work and gallons of sweat. You’ve pushed and strained through endless months – even years – of dedicated training while your friends abused themselves with low nutrition, lack of sleep and improper lifestyle decisions. However, your efforts have begun to pay off with some impressive gains in the mass and shape of each muscle group. Although your arm circumference may not be 20 inches, there’s no question that your arms are well above the units dangling from the shoulders of your “friends” who previously mocked your dedication to training and nutrition.

Yet, while your muscle mass continued to slowly increase, your biceps peak may not have really changed. If you’re like most guys, your goal is a metamorphosis from a resting, rounded hill of biceps mass to a mini-volcanic explosion when you flex your arm. So, how can you obtain more peak in your biceps? The short answer is that it’s hard to do. The longer answer lies in developing even more mass. Once you’ve developed adequate biceps mass from a steady diet of barbell and dumbbell curls, you can improve the peak by concentrating on developing the long head (“outer” head) of the biceps brachii muscle.

The biceps brachii muscle has two (“bi”) heads (“ceps”). The short head attaches to the anterior part of the scapula (shoulder blade) near the shoulder and runs down the medial (inner) part of the humerus bone of the arm. It joins the long head to form the thick bicipital tendon. This tendon crosses the anterior side of the elbow and attaches to the radius bone near the elbow. The long head of the biceps begins on the supraglenoid tubercle of the scapula, a bony projection that sits on the scapula just above the shoulder joint. It has a very long tendon that crosses the shoulder joint and therefore, is affected by shoulder position.

For example, the long head is mechanically advantaged when it’s stretched, such as during a curl with the shoulders slightly extended (arms held slightly back), but it is de-emphasized with the arms brought forward during the same exercise. The long head sits along the lateral part of the arm and along with the short head, attaches to the radius bone by way of the bicipital tendon. Because the muscle belly of the long head is actually rather short (it has a long tendon), thickening this head will improve your arm’s muscle peak more rapidly than thickening the longer-bellied short head of the biceps. The enhanced peak from the long head will be most evident (especially at first) when the flexed arm is viewed from a lateral side.

Both heads of the biceps are strong flexors of the forearm. However, because the bicipital tendon is attached to the radius bone, (most lateral forearm bone), the biceps is also a very strong supinator of the hand (turns palm toward the ceiling) if the hand begins in a pronated position. This is because when the hand is pronated, the radius sits on top of the ulna. When the biceps muscle contracts, it pulls on the radius to move it back into a position where the radius lies beside, not on top, of the ulna. This moves the hand from a pronated to a supinated position.

After a few sets, it will feel as if you’re sculpting your arms with an ice pick. Due to the constant tension imposed by the cables and the position of the arms, it’s difficult to use a heavy weight, so use this exercise as a finishing move, not as a mass builder.

1. Position yourself between the upright posts of a high pulley station. Turn around so the high pulleys are behind you. (This is the opposite of the position you’d take if you were doing high pulley flyes/crossovers for your chest). Your feet should be shoulder-width apart or wider to maintain a comfortable balance. Take the handles from the top pulleys in your corresponding right and left hands (one at a time to avoid shoulder strain). The handle should have a rotational swivel so you’re able to pronate and supinate your hand during the exercise.

2. Your elbows will be straight or almost straight, as you grab the pulley handles (as if you were in the stretched position of cable flyes). Because you’re facing away from the machine with the pulleys behind your shoulder joints, you’ll likely feel some tension across your chest and shoulders. Lower your arms and forearms so they’re parallel to the floor (or slightly lower).

3. Move your wrist/hand position so it’s partway between pronation and supination. In this position, the thumb will be closest to your face and the little finger will be farthest.

4. Keep your shoulders and (upper) arms from moving. Begin to supinate both hands as they move closer to your shoulders. By the time the elbow angle is 90 degrees, your hands should be fully supinated, so the little finger is closest to your face and the thumb is farthest.

5. At the top of the contraction, when you can’t move your hands any closer to your head, attempt to give an extra supination to get the little finger even higher. Hold this for three seconds while flexing the upper part of your arms as hard as possible (isometrically “squeezing” the biceps). If you have trouble with this, you may need to contract one arm at a time. This will produce an unbelievable contraction, and if you’re doing it properly, the long head of the biceps will feel like it’s being peeled like a banana, but with the finesse of a buzz saw. That sense of a disintegrating biceps is necessary in your quest to successfully peak this muscle.

6. Keep your upper arm (humerus bone) parallel to the floor as you slowly extend the elbow joint and lower the weight. During the descent, move your hand from the supersupinated position to the original semi-prone position. Just before reaching a position with a straight elbow, begin the next repetition. Don’t forget to supinate your hands during each successive contraction. 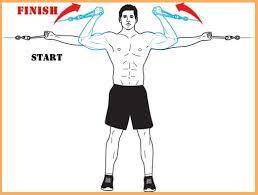 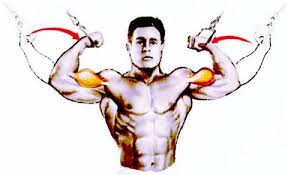 Your arms will be slightly extended and your shoulder joints will be stretched during the exercise because the pulleys are slightly behind your body. This position is important because the long head will be stretched, which greatly improves the mechanical efficiency and contributions to the pulley curls by the long head. If, instead, you faced the pulleys so your shoulders were pulled forward and the cables were to your front, the long head of the biceps would be somewhat slackened and this would reduce its mechanical contribution to the exercise. Nevertheless, don’t overdo this. It’s not intended to be another version of flyes.

The position described above is fine if you have no prior shoulder injuries. However, the risk for the additional stretch/stain across an already injured shoulder joint isn’t worth the biceps benefit because this would only invite a layoff and a painful recovery for your shoulders. If you have a shoulder joint or rotator cuff injury, face the pulleys during the exercise so they’re in front of you. In addition, don’t elevate your arms more than 30 degrees from parallel to the floor. This lower position will minimize rotator cuff strain.

Unlike other biceps exercises (standing barbell curl, alternate dumbbell curl, etc.), biceps tension isn’t reduced in the high pulley cable curls when the elbow is fully flexed. Consequently, the biceps will have a superior overload in the fully flexed position, but this also results in a very intensive and fatiguing exercise. Therefore, slowly add sets and resistance over several weeks, but also make sure your form is perfect and each contraction is maximal before adding more resistance. Since the exercise is intense, you may find that you’ll need additional recuperative time between biceps workouts, so in the beginning, you may need to do the high pulley curls on every other biceps day. Insufficient rest will result in a self-destruction of the mountains that your biceps are trying to become. Even with years of training under your belt, you’ll find that biceps peaking isn’t easy. It’s a slow, painful process and depending on your genetics, it may never quite be like the erupting mountain you wish for. Even so, your biceps peak can be improved, and when it arrives, this mountaintop experience will be well worth the wait!