Building muscle won’t make a mental midget into Einstein, but it will make EVERYONE smarter, and the data proves it!

Guys with big muscles, bodybuilders et al. aren’t known for their brains. We are known for our bulging muscles, low body fat and making loud noises in the gym while lifting heavy-ass weight.

People also seem to think we are all dumb as a rock.

It turns out the stereotype was wrong. While stupid people might become more muscular, being muscular isn’t what’s making them stupid; it’s making them less stupid than they would have been. It won’t make a mental midget into Einstein, but it will make EVERYONE smarter, and the data proves it!

We can’t talk about being smarter without talking about your attitude and your mood. Plus, mental health is a huge issue. According to Mental Health America, one in five Americans are suffering with some form of mental illness. That’s 20 percent! Medication can be risky and come with a host of side effects, but one effective way to help alleviate and prevent some issues (talk to your doctor, of course) is strength training.

According to a 2018 study in JAMA Psychiatry, strength training can help greatly reduce depressive symptoms. The act of exercising, the positive effect it has on your appearance, and the building of healthy habits has no downside. The physical and mental gains from the activity far outweigh any risks … because there are none! 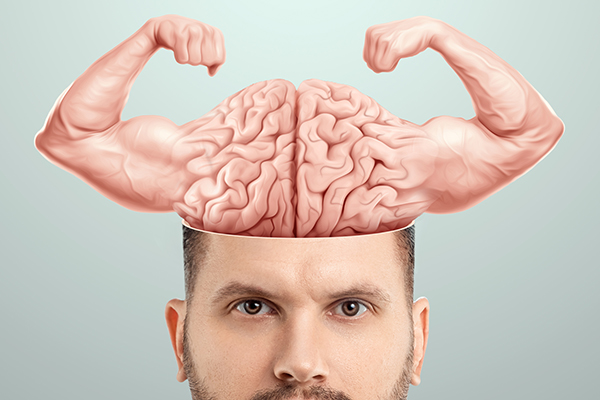 In a recent study published in Sci Rep, strength training was shown to decrease anxiety by 20 percent in participants. Researchers speculate that the exercise increased their belief in their capabilities and coping skills. One area we can also explore is that the strength training led to better hormonal health, which would also impact mental performance and stability.

Strength training is also a critical tool in losing weight and maintaining a healthy bodyweight. It is essentially proven that being fat is bad for not only your systemic health, but horrible for brain health. By not being fat, you are optimizing your brain’s ability to operate at its best!

In a 2017 study in Psychology in Sport and Exercise, it was demonstrated that women who exercise were able to improve their body image more than those who didn’t. The effect on body image was immediate and lasted well over 20 minutes after the exercise was completed. If you are confident and poised, your ability to perform and present in a workplace setting will be superior.

Some other keys to mental optimization:

• Eat a healthy diet full of micronutrients and adequate essential fatty acids including EPA and DHA from fish oil (try to get 3 grams of EPA/DHA combined per day).

• Stay hydrated – make sure to drink adequate liquids and electrolytes. I like to add some MTS Nutrition NaturaLyte to my water, but you can also simply add sea salt or Himalayan Pink Salt to your meals.

• Sleep at least seven to nine hours a night.

• If looking to really step it up, try Ambrosia Mental Jewels also known as Genius Juice. A delicious powder that you can take daily that helps Mental Jewels™ is formulated to help uncover your true mental potential. With clinical doses of secret-society worthy ingredients such as AlphaSize®, SerinAde™, BaCognize™ and multiple other proven mind-stimulating jewels, you will be on the path to true enlightenment.

The next time somebody calls you a meathead, thank them and grind out one more rep!