What guy doesn’t want more power? Unless you are a professional athlete, developing lower body power can’t do much about your influence of work. However, increasing your lower body power will allow you to jump and run with more authority on the basketball court or blast down the field in a pickup game of football. Furthermore, developing a greater base of power can stimulate your balance and coordination while increasing your endurance and explosive strength, and burn a lot of calories to boot. Dumbbell squat jumps are a great way to create a strong lower body and then unleash its power.

The squat jump involves all of your thigh, calf and hip muscles, but only the major muscles will be discussed here. The quadriceps femoris is a group of four thigh muscles1 that are hit especially hard by squat jumps. The vastus lateralis muscle covers the lateral part of the femur bone of the thigh. The vastus medialis muscle is anchored to the medial part of the femur. The vastus intermedius muscle is attached to the central, anterior part of the femur.1 The rectus femoris begins on the hip bones at the iliac crest and above the hip joint and not on the femur.2 The fibers from these three vasti muscles attach to the quadriceps tendon, which in turn connects to the patella (kneecap). This tendon continues as the patellar ligament and it anchors on the tibia bone of the lower leg. The four quadriceps muscles work together to extend (straighten) the leg at the knee joint. The rectus femoris is more effective as a knee extensor when the hip is almost straight.

The gluteus maximus is the major muscle of the hip.1 It extends the thigh (moves it backward) when you are jumping upward from the squat position. The fibers of the gluteus medius muscle runs between the ileum bone of the hip and the posterior part of the femur bone of the thigh. It abducts the femur at the hip joint by moving the femur laterally, away from the midline of the body. The gluteus medius maintains body balance during the takeoff and landing of squat jumps.

The long head of the biceps femoris, semimembranosus and semitendinosus muscles comprise the hamstring muscles. These muscles attach to the posterior part of the hip and the pelvic bones.1 They extend down the posterior side of the femur bone to attach to the medial side of the tibia bone of the leg (semitendinosus and semimembranosus), or the lateral side of the tibia bone just below the knee (biceps femoris). Together these muscles flex the knee. However, when the foot is on the ground, the hamstrings extend (straighten) the hip joint, and therefore these muscles are very activated during the upwards leap in dumbbell squat jumps.

It is important to stretch your quadriceps and hamstrings and warm up for a few minutes on a stationary cycle the first set.3 This is because dumbbell squat jumps are explosive, so the muscles and joints should first be warmed up appropriately. In addition, your shoes should have a good sole that will not slip when you are jumping upward.

1. Stand on a non-slip surface. Take a medium light dumbbell in each hand. Place your feet about shoulder-width apart.

2. Squat down until your knees are flexed to an angle of about 90 degrees.

3. Explosively and powerfully jump upward as high as you can. Make sure that you go up on the tips of your toes at the top. 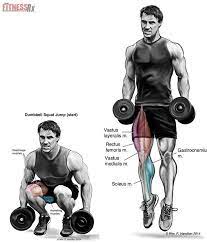 4. You will leave the floor momentarily, and then come down. As soon as your feet hit the floor, immediately begin your squat downward, but slow the descent of your body, so that it’s a controlled squat back to the starting position.

5. Do not pause at the bottom, but immediately explode upward for your next jump.6

6. Continue for a minimum of 15 repetitions. Rest about a minute and then repeat the set. You can work up to four sets. Do not be too concerned about using heavier dumbbells too quickly.4

The tension in the vasti muscles diminishes as you approach the top portion of the lift (with the knees straightened). Conversely, the rectus femoris is less active at the bottom but becomes more activated when the hip and knee are being extended. Since the gluteus maximus muscle and hamstring muscles are strong extensors of the hip, they are very active during the jump upward. This exercise lengthens the fibers under tension during the drop back to the floor and this can really make your thigh and calf muscles sore, so ensure that you gradually increase the sets and reps in this exercise.

The dumbbell squat jump can be a great complement to other resistance or cardio training. Alternatively, they can work independently to effectively add power and strength to your lower body, while giving you greater jumping ability,7 improved ankle and Achilles tendon strength,8 or explosiveness in each step. The power in your legs and hips that arise from this exercise will certainly command great respect, not to mention performance. Together, your power surge can vitalize almost everything that you do. 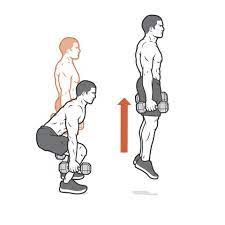