The back is an important part of any physique. Sometimes guys tend to ignore the back a little, because it is harder to see these muscles than the chest, arms or thighs. However, your torso cannot have a strong pillar without a strong back. The other problem with most back exercises is that they are plain hard to do and require an enormous amount of energy.

Although there are better exercises for increasing the width of your upper back, there are not many exercises better than barbell rowing for developing middle and upper back thickness and strength. Rowing is an effective activator of all middle back muscles, especially the latissimus, teres major and trapezius muscles of the back.

The latissimus dorsi (lats) is a superficial muscle of the back and its development is critical for an overall thick appearance in the back. It covers all of the middle and much of the lower parts of the back. The latissimus dorsi is attached inferiorly (at its bottom region) to several places, including the thoracic vertebrae of the spine and the iliac crest of the hipbones. The fibers of the latissimus dorsi also attach to the lower three to four ribs and the thoracolumbar fascia (a tough connective tissue sheet that covers the lower back). The fibers from all of these areas converge like a fan and attach laterally to the upper (superior) portion of the humerus bone of the upper arm. It forms the majority of the width of the upper back inferior to the armpit (axilla). The fibers of the latissimus dorsi have different angles of pull depending on where they attach. In general, the primary function of all of the fibers when they act together is to extend the humerus (pull the upper arm backward), adduct the humerus (bring the arm toward the center of the body) and medially rotate the humerus (rotate the shoulder so that the if the palm of the hand is initially facing forward, medial rotation would turn the palm toward the midline of the body). The lower part of the latissimus muscle has a more direct line of pull with the shoulder flexed and arm raised to about 30∞ above parallel with the floor. The middle fibers have a more direct pull with the hands and arms working at mid-chest level. The upper fibers are best activated with the hands a little above shoulder height.

The most superior parts of the upper back include smaller muscles that are positioned just above the latissimus dorsi. By increasing the thickness of the teres major muscle, the width of the upper back immediately under the arm in the region of the axilla will be greatly improved. Barbell rowing is wonderful for activating the teres major, and the heavy loads that can be lifted are guaranteed to add thickness and depth to this muscle. The teres muscle attaches along the medial border of the scapula and runs to the same region of the humerus bone as the latissimus dorsi. The teres major medially rotates the humerus bone and extends the humerus from a flexed position (brings the arm backward). Barbell rows activate the arm extension function of the teres major. Because it begins on the scapula, it is more completely activated with the arms at mid-chest level (and is less mechanically active in the exercise with the arms and hands closer to the feet). That means that it is particularly important to pull the bar up as high as possible if you want to activate and thicken the teres major muscle.

Although rowing activates hosts of other small back and shoulder muscles, the final muscle that will be discussed here is the trapezius muscle. This is a large, flat triangular muscle, which begins at the base of the skull and extends from the base of the cervical (neck) vertebrae to the last (12th) thoracic vertebrae in the back. It attaches to the lateral part of the clavicle (collarbone) and along the medial border of the scapula. This arrangement forms a unique diamond-shaped muscle, with three general regions, with each region having a different function. The middle part is most active in barbell rowing, because it pulls the scapula toward the vertebral column (by squeezing the scapula together) at the top part of the row.

1. Place a loaded barbell on the floor, preferably in front of a mirror. Place your feet under the bar, about shoulder-width apart.

2. Bend over from the waist and flex your knees and hips to reach the bar. There should be a flat line from your shoulders to your hips.

3. Place your hands in a pronated position around the barbell (palms facing downward), with a grip that is only slightly wider than your shoulders.

5. Keep your head up (looking into a mirror helps) and pull your elbows away from the ribs so that there is a straight line running from one arm to the other. However, do not try to excessively arch your neck and look at the ceiling, as this would place unnecessary pressure on the disks in your neck.

6. Pull the barbell up toward the mid part of your chest (in line with the edge of your lower pectoralis and not your abdomen).

7. Keep your elbows away from the ribcage as the bar is pulled toward your torso. At the finish (highest point in the lift), there should be a straight line between both shoulders and the elbows.

8. It is very important that the lower back does not move (flex or extend), as the weight is being lifted or lowered. The slightly bent knees and tight back will reduce the risk of lower back injury, and lifting or jerking a weight sloppily upward by having excessive movement in the spine will defeat this purpose and risk injury to your back.

9. From the top position, return the barbell slowly toward the floor (3-4 seconds) but do not let the bar hit it. Attempt to obtain a stretch in the upper back, with the bar in the lowest position. Do not move the lower back (i.e., this is not a deadlift), but make sure the stretch is in the middle and upper back. Then pull the weight back to the chest for the next repetition.

If you want to reach the uppermost fibers of the middle and upper back during barbell rowing, you should keep your torso about 20∞ above a position that is parallel to the floor. This position increases the emphasis on the teres major and reduces slightly the activation of the lowest fibers of the latissimus in favor of reaching fibers placed closer toward the head. It also activates the middle parts of the trapezius muscle and the upper parts of the trapezius (but of course not nearly as strongly as shrugs or other direct trapezius exercises).

The hands can be placed closer than shoulder-width major and this will increase the range of motion for the latissimus muscles. However, the closer grip may increase arm (biceps) fatigue, decrease the amount of weight you can lift versus a wider grip and diminish the activation of the teres major muscles.

A thick and dense back does not come about with light weights, but heavy weights will take a serious toll on both your mental and physical elements. No matter how heavy the weight, the speed of the movement should also be relatively slow and controlled at all times. It will do you no good to lift a heavy weight by jerking it up (because this could hurt your lower back) and letting it drop back to the floor in an uncontrolled fashion. You should always make the effort to try to slow the weight on the downward part of the lift, as this eccentric part of the contraction is at least as important as the lift upward.

The back is probably the most energy draining area to train, at least next to the quadriceps. It is possible to overtrain the back, but adequate rest and nutrition will take care of that. Barbell rowing is one of those great exercises where you activate a lot of muscle fibers so you can obtain an enormous back “pump” after almost the first set. Although a pump is not permanent or even necessary for improving your muscle mass and structure, if you are serious about wanting a thick back, barbell rowing will eventually create a new dimension of thickness. Sure, barbell rowing is tough, but the outcome in back development and strength is certainly worth the investment in sweat. 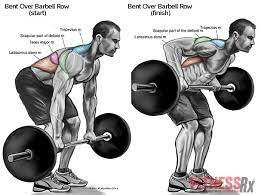