The shoulder joint and its surrounding musculature are not only critical to training, but also to everyday activities. Injury to the shoulders can limit your participation and performance in lifting weights and tasks as simple as putting on a shirt. Nobody wants underdeveloped and thin shoulders – that’s a sign of a weak and frail physique. Poor shoulder muscles are almost impossible to hide because the shoulders are visible from all angles, especially in the spring and summer months. On the other hand, thick trapezius muscles and strong deltoids produce an illusion of upper body width development, which improves the visual appeal across your entire physique.

To build big and powerful-looking shoulders and avoid injury, you must approach shoulder training to not only build muscle mass, but symmetry as well. This can only be achieved if all three regions of the deltoid are stressed and you employ proper exercise technique during your training.

Seated shoulder presses primarily activate the flexion/extension and abduction components of the shoulders. The deltoid muscle is involved in all of these functions. Although the deltoid is really only one muscle, it does have three separate regions and different functions arise from each of these areas. The anterior fibers of the deltoid begin along the lateral part of the clavicle (collarbone). The posterior fibers attach along the spine of the scapula (shoulder blade), which is located on the upper and posterior side of the scapula. The medial fibers take their origins from regions between the previous two muscle areas of the deltoid from the acromion (the “point” of the shoulder) of the scapula.

We don’t normally think much about the rotator cuff musculature, but it will be something you’ll be forced to think about if you ever incur a shoulder injury. Four scapular muscles (subscapularis, supraspinatus, infraspinatus and teres minor) form the rotator cuff muscles. The primary rotator cuff muscle activated by presses overhead is the supraspinatus. It’s a rounded muscle that lies in the supraspinatus fossa at the top and posterior side of the scapula. It begins near the medial side of the scapula (close to the vertebrae and the center of the body) and runs over to the superior part of the head of the humerus. The supraspinatus muscle abducts the humerus by raising the arm out to the side of the body, so the upper arm moves in a lateral movement upward. It also strongly supports the shoulder by preventing the humerus head from dropping inferiorly (toward the floor) when the weight is overhead.

Seated Press Behind the Neck

1. Select a bench that has a back support. Place it in front of a mirror if possible. Your gym might have a shoulder press bench with a rack to hold your barbell and that’s a fine choice.

2. Place your hands on the bar with a pronated grip that’s about 2 inches wider than shoulder width, so the forearm will travel in a vertical line during the movement.

3. Push the weight upward and begin to straighten your elbows (elbow extension). Ensure that your forearms are as vertical as possible throughout this upward movement.

4. Continue to push the weight upward to an overhead position, but terminate the extension just short of locking out your elbow. By keeping your elbows slightly bent at the top, the anterior and medial deltoids will be maintained under constant tension and they will not get a chance to rest at any point during the repetition. This may feel uncomfortable, as the contractions get intense after only a few repetitions of these non-lockout repetitions (particularly if you do them more slowly and under control, both in the upward lift and the descent of the weights).

5. Flex your neck slightly forward and slowly lower the bar to a position behind your neck. While the bar is dropping behind your neck, pull your elbows slightly posteriorly (backward), rather than pulling your head and neck excessively forward.

6. When the bar is about to make contact with the trapezius muscles at the base of your neck, reverse the movement and begin the pressing portion again. If the bar contacts your neck, stop and move your seat further forward and/or move the bar back more posteriorly as you lower it.

7. At the end of the set, return the bar to the racks or have your partner take the bar from you. Rest a few minutes then hit your next set. 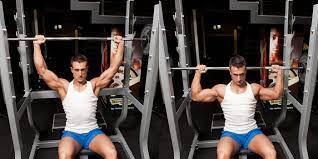 The “up” phase of this movement involves both flexion and abduction of the humerus at the shoulder. This means both the anterior and medial fibers of the deltoid will be worked very strongly. In contrast, the posterior deltoid doesn’t get much work with seated presses. The trapezius and serratus anterior and supraspinatus muscles are active for most of the press upward. The trapezius and other upper back muscles and triceps will do most of the work during the last one-quarter of this lift as your arms are straightened. The supraspinatus literally holds the shoulder together with the weight overhead, so “locking” out your elbows with the weight overhead should be avoided since this will only place more stress on the supraspinatus than needed.

Most of the work for the deltoids is performed in the lower region of this lift. Thus, it’s not essential, or even desirable, to lock out your elbows at the top of this movement. It’s also worth noting that the descent of the bar should be slow and controlled. If you don’t control the downward movement of the lift, you could get an injury by bouncing the bar off your neck.

Since the shoulder is a joint with very little stability and is literally being held together by its muscle and tendinous attachments, it’s important to isolate the muscle regions with relatively strict movements. The shoulder press is not a good exercise for someone who has previously suffered a rotator cuff injury (unless approved by a physician) because the extension phase of the lift places a lot of stress on the supraspinatus muscle of the rotator cuff and this can destabilize the shoulder joint.

For most purposes, choose medium weights and aim for at least eight to 10 repetitions when completing shoulder presses. Loading the barbell up to extremely heavy weights you can only lift for three to five repetitions will quickly and intensely activate the fibers in the shoulder girdle, but it also puts a lot of stress on the supraspinatus muscle and this risk is definitely not worth it. In addition, muscle mass and strength can be obtained as effectively (and more safely) with a medium weight you can lift for a few more repetitions. Although one can never guarantee injury-free training, there’s no point trying to invite injuries. It’s important to train strictly and carefully when you’re working your shoulders. After all, your goal is to produce strong, muscular shoulders and trapezius, not to end up in a physical rehab unit after a needless injury. Train hard, but safely, and you will achieve outstanding shoulders that will enhance your athletic performance and enable you to look great in or out of clothes.