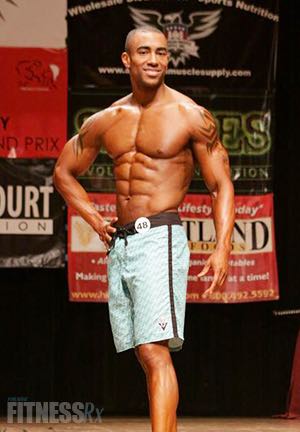 Sometimes even something as simple as hearing a person’s name can conjure up ideas of what they may look like. If you have the words ‘brick’ or ‘house’ in your name, then there’s a good chance that people reading it may think that you have a quality set of muscles to go along with it.

Then picture if your last name has both words!

If you happen to be Duane Brickhouse of Ellicott City, Maryland, then you will not disappoint anyone in that category. Standing at 5’10" and 178 pounds, he has already enjoyed a level of success on the Men’s Physique Division stage.

In 2012, Brickhouse won the Masters and Overall at the NPC Shawn Ray Maryland Grand Prix and also the Muscle & Fitness Male Model Search at Olympia Weekend.

But we’re getting ahead of ourselves a bit. The story begins a decade earlier, as Brickhouse explains: "In 2002, I had been going to a Gold’s Gym and I saw a lot of people prepping for shows and then I started to read the magazines and websites to help fine tune my routine."

But things began to come into focus even more for Brickhouse after attending the 2010 Mr. Olympia contest.

"At that point, I also started researching on becoming a personal trainer to make sure that I fully understood how to design my own program," he said.

Putting the time to good use, he also kept an eye out for ways to one day get up on a stage. Enter the MPD. "As I watched the beginning of the division, I saw people like Steve Cook and Mark Anthony Wingson get up there and move on to earn their pro status and I knew that was what I wanted to do," recalled Brickhouse. "The final bit of inspiration came from meeting Steve and getting a few words of encouragement from him."

Following in those men’s footsteps is what Brickhouse intends to do and he is encouraged by what could be for the MPD. "The common theme that I see when reading about (the division) is the increased participation at each show," he added. "I feel like there is no limit to how popular (it) can get."

And he is a natural to go places with that name.