For centuries, shoulder strength and size have defined a man is really made of. In past eras, the test of a person’s strength could be evaluated by the amount of weight that could be lifted overhead. Thus, perhaps there is some heritage, not to mention survival, attached to the popularity and importance of pressing movements.

Ratchet up to the 20th century, as a future Mr. Olympia, actor, Governor of California and bodybuilding icon was trying to think of ways to improve lagging shoulders but without using massive weights that might invoke injury. Arnold Schwarzenegger modified and popularized an old exercise that creates and sustains a constant burning tension throughout the anterior and medial fibers of the deltoid with his version of a dumbbell press. The “Arnold” press has its detractors, because you can’t use huge weights on the press upward if you do the exercise correctly. After all, there is an undeniable relationship between the amount of weight lifted for a given number of repetitions and muscle mass. However, the amount of weight used is not the only determining factor for muscle mass and this fact should not be lost in discussions about shoulder exercises. This is because the shoulder is a very unstable joint. Unlike other joints, it is literally being held together by its muscle attachments and tendons.

The rotator cuff muscles and particularly the supraspinatus muscle of this group of muscles is severely stressed and stretched, especially in overhead pressing movements. With the arms locked out overhead, a heavy weight attempts to dislocate the shoulder joint inferiorly (toward the floor) while the supraspinatus, like a strong rubber band, tries to prevent this from happening. The rotator cuff can be strengthened, but sooner or later, the supraspinatus can be stretched and injured (torn) with heavy and repeated overhead lifts, and this could spell the end to your upper body training for a long time. Thus, when it comes to the vulnerable shoulder joint, it makes sense to isolate the muscle regions with relatively strict movements without heavy overhead lockouts. That does not mean that you do not have to work hard and intensely to see the desired results for the shoulders … but you should work intelligently. It also makes sense to find exercises that will reduce the unnecessary stress and strain on the rotator cuff muscles, but still maximize the shoulder development – and that’s where the Arnold press comes in.

Movements at the shoulder are very complex relative to other joints (e.g., the hinge joints of the knee or elbow). The glenohumeral (shoulder) joint is made of the circular head of the humerus bone of the upper arm, which sits in a very small indentation in the scapular bone (shoulder blade) called the glenoid fossa. This ball-and-socket joint is constructed so that the ball is too big to fit in this socket joint. This results in a very unstable joint. Without intact and strong rotator cuff muscles, the shoulder joint would be unstable and dislocated with only small movements.

The rotator cuff muscles are comprised of four scapular muscles: subscapularis, infraspinatus, teres minor and supraspinatus. Only the supraspinatus muscle will be discussed here, as it has the potential to be activated the greatest in the Arnold press. The supraspinatus is a rounded muscle that lies in the supraspinatus fossa at the top and posterior side of the scapula. It begins near the medial side of the scapula (close to the vertebrae and the center of the body) and runs over to the superior part of the head of the humerus. The supraspinatus muscle assists the medial deltoid in abducting the humerus by raising the arm and hand in a lateral raise upward. It is most active when the arm is moved between zero and 90 degrees (from a straight arm hanging down to where the arm is parallel to the floor). Its other important function is to hold the head of the humerus in the glenoid cavity of the scapula. It is really the only muscle of the rotator cuff that does not have a rotational function.

1. The Arnold press can be preformed with a dumbbell either standing or seated, but the standing version will be described here. You may prefer to stand in front of a mirror. Take a dumbbell in each hand and clean the dumbbell to your shoulders with your palms supinated (facing toward your body). This is your starting position. You really should not need too much help getting your dumbbells up to the starting position, because you will not be using super heavy dumbbells.

2. Start with the elbows pointed to the floor with the arms adjacent to the corresponding lateral sides of your rib cage.

3. Press the dumbbells upward, but after only a couple of inches as you reach eye level, begin to rotate the hands so that palms will eventually face away from you (pronated palms) at the top of the movement.

4. The dumbbells should also begin to come together as you press upward. This is like an “A,” with a wider position at the start near your shoulders and coming closer together at the top of the movement, which is at the apex of the “A.” 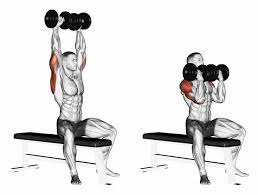 5. As you approach the top of the “A,” the elbows will come out and up, and the little-finger side of your hands will come up a little while the thumb dips downward. This is a bit like partly pouring out a cup of water in front of and over your head.

6. Continue pressing upward and at the top of the movement, you should find that your elbows are bent and pointing to the sides. Do not straighten your elbows.

7. Next, slowly lower the weight to the starting position and reverse the movements by bringing the elbows back to the lateral side of the rib cage and your palms supinated and facing your face at shoulder level.

The anterior and medial fibers of the deltoid are strongly activated during the press upward as the humerus bone is flexed and abducted. The supraspinatus muscles will be most strongly activated as the arms are abducted and the weight is lifted upward. The supraspinatus will continue to fire and act as a stabilizer of the shoulder during the lift from shoulder level to the final overhead position (the last half of the exercise).

Do not lock out the elbows and keep the dumbbells in a static position over your head, as this would only add to the strain on the supraspinatus muscle without really providing much benefit to it or the deltoids. Nowhere is warming up a joint more important than in the shoulders. Remember that the shoulder joint is literally held together by its muscle attachments and not other bones. Thus, stronger and thicker deltoid and supraspinatus muscles mean greater shoulder stability and reduced risks for injury.

A medium weight done correctly for 12-15 repetitions will be a great deltoid finishing exercise by making your shoulders feel like they are ready to explode, and without using gut-busting tonnages. You should also allow sufficient time to recover after hard deltoid days, particularly if you are also planning a subsequent heavy chest day (which will also activate those anterior deltoid fibers).

No Pain Equals Much Gain

Your goal of injury-free, strong and thick shoulder muscles can become a reality, but only if your treat your shoulder joints with respect and pay close attention to your exercise mechanics, or form. By taking care of your rotator cuff through proper form in all of your deltoid exercises, you will increase the likelihood of maintaining shoulders that are healthy and free of injury. The shoulder is one of the few areas where no pain equals much gain. It is doubtful that the Arnold press will benefit any political aspirations you might have, but then again, it did not seem to hurt the originator of the exercise.