Lunges are only for the serious lifter who is willing to push well through the pain barrier into the valley of unbelievable thighs.

Outstanding quadriceps separation demands freakish thigh mass that dives into deep canyons etched on either side of the muscle bellies. This kind of thigh development initially relies on regular back squats and leg presses to build great mass. However, as good of a mass builder as these exercises are, they simply do not get the job done when it comes to developing thigh separation and cuts. Achieving those deep separations requires exercises that build mass by targeting each of the bellies under near-constant tension and this means some specialization work for the middle and the lower quadriceps.

You probably are drawn to thinking about leg extensions for ripping your thigh mass. However, if you are willing to handle the work, the barbell lunge is an alternative and intensive way to blast a bulky thigh into strips of carved, sharp and lean mass. As a byproduct, lunges will greatly improve your quadriceps, hamstrings and gluteal power and endurance and this will come in pretty handy when you start your heavy squat sessions for adding even greater overall mass.

To do lunges properly, you must rise above the crowd that is satisfied with a few sets of leg extensions to tighten the quadriceps. Lunges are only for the serious lifter who is willing to push well through the pain barrier into the valley of unbelievable thighs. Three sets of these will take your thighs to new contours, valleys and grooves that you did not know existed.

The gluteus maximus muscle is the largest and thickest hip muscle and it contains the strongest and largest muscle fibers in the body. The upper attachment of the gluteus maximus is on the major bones of the hip and the lower attachment is on the posterior side of the femur bone of the thigh below the hip joint. This muscle pulls the thigh posteriorly (backward) during the push phase of lunges.

Lunges, like knee extensions, can be tough on the knees, so you should carefully warm up with stretches and some moderate biking before doing lunges. Although the exercise can be done with dumbbells, as you become more experienced, you should not find it difficult to keep your balance with the barbell version of this exercise.

1. Place a barbell on a squat rack. Start with a light weight until you get the feel for the movement. Position your body in the same manner as though you were doing squats. Start with the bar across the top of your trapezius under the shoulders, in the same way as if you were to do a squat.

2. Straighten your knees and stand up vertically, so that the weight is taken on your shoulders.

3. Take a full step backward, away from the squat rack.

4. Start with both feet about shoulder-width apart. One leg will act as an anchor (e.g., the left leg). The other leg (e.g., the right leg) will be your lunge leg for the first repetition.

5. Take a step forward toward the squat rack with the lunge leg. This should be a good stride length (approximately a 3-foot stride), but it should not be so close to the squat rack that you will hit it at any point in your movement.

6. Bend the knee on the front (lunge) leg until the knee angle reaches 90 degrees. The thigh should be about parallel to the floor in the down position. At the same time as the knee from the lead leg is going forward, the thigh of the rear anchor leg should come down to almost kiss the floor. Keep your back vertical to the floor and your eyes looking forward (do not look down at the floor).

7. Step back to the starting position, then lunge forward with the other leg. Alternate between left and right legs. Start with 15 repetitions each leg (30 total steps). At the end of the set, take a step forward and return the barbell to the squat rack.

You can work up to 25 repetitions per leg, but should not need more than that. Take particular care as you are nearing the end of your set and you are fatiguing, as this is a time when your balance could be compromised. You also need to make sure that you do not bend over from the waist, as this will excessively increase activation of the gluteal muscles, not to mention increasing the chance of losing your balance.

The musculature of your middle and lower back and calves will also be activated during lunges. This provides an added bonus for increasing your body’s metabolism to maximize your ripped-to-shreds training goals. A deep lunge and greater stride will provide a superior stretch and will improve activation of all of the affected muscles. However, you must work into this slowly. You should stretch your hamstrings, calves and quadriceps prior to beginning the exercise. Be careful that you do not bend forward from the waist during the lunge. If you find yourself leaning forward, you are likely using too much weight and/or your stride is too short. It is not necessary to use squat-like resistance on lunges to get the job done. This is more a factor of sustaining constant tension throughout the range of motion than moving superhuman weights.

If you thought that leg extensions were the only way to thigh cuts, you will be surprised how quickly lunges will quickly etch striations and separations across the mass that you have accumulated in your underpinnings. Lunges are not ideal for building mass, but they are excellent for refining and adding muscle density. Once you get serious about your lunges, you will begin to see a radical transformation in the power, shape and separations in your anterior thigh and hamstrings. Your thighs will take on an all-new muscle quality with unreal, mind-blowing thigh separations with valleys and peaks erupting across your lower quadriceps. 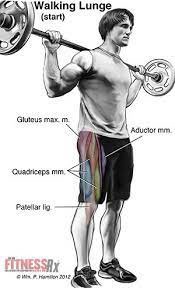 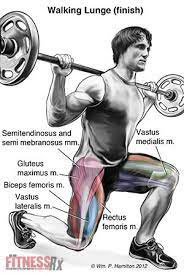