Most guys who strive for physical excellence grow up with the idea ingrained into them. It’s not something that they necessarily want to do, but they know that thigh strength and mass must be built with plenty of barbell squats. Indeed, squats are a wonderful way to build the base of thigh mass and largely, it’s hard to find an overall exercise that’s quite as effective as the squat. However, squats activate a large bulk of the fibers in the quadriceps group of the anterior thigh without much discrimination to which muscles are selected. That’s fine if every muscle belly in your thighs grow at the same rate, but it’s disastrous to someone who wants to achieve a certain degree of balance and symmetry while showing each ripped muscle fiber in the anterior thigh.

Thigh symmetry is something most people have to work on. Sometimes the medial side of the thigh is great, but there’s absolutely no sweep at all to the outside of the thigh. Alternatively, the lateral (outside) sweep of their thighs is adequate or maybe even good, but the medial (inside) thigh, especially just above the knee, is flat. One area that will really distinguish a great thigh from a good thigh is the development of the “teardrop” shape of the lower thigh, just above the knee joint, while showing superior separation in each of the muscles of the quadriceps.

Overview of the Vastus Muscles

The three vastus muscles make up the majority of the anterior thigh. The vastus medialis is attached to the medial (inner) part of the femur bone (thigh bone) and it forms a teardrop-like shape just above and to the medial side of the knee when it’s well developed. The vastus lateralis muscle is attached to the lateral (outer) part of the femur. The vastus intermedius is attached to the femur and is located intermediately between the vastus lateralis and the vastus medialis. The fibers of all three vasti muscles converge on the quadriceps tendon, which crosses the patella (kneecap) to attach to the tibia bone just below the knee. The quadriceps tendon changes its name as it crosses the patella, where it’s called the patellar ligament.

the medial part of the patella and it’s thought to help the patella track properly during movement of the knee. The patella won’t track properly and it will pull to the lateral side if the VMO is weaker than the muscles on the lateral side of the thigh. This sets up a potential knee injury for anyone who’s sprinting, jogging or even walking upstairs. Clearly, if a weak vastus medialis (or disproportionately weak relative to the other muscles in the quadriceps) is problematic for low, stress-filled activities, you can only imagine the disaster that awaits someone with this muscle imbalance who’s doing a gut-busting set of leg presses or heavy, deep squats.

The vastus medialis and especially the VMO part of this muscle is primarily responsible for tibial rotation (rotation of the tibia bone of the lower leg on the femur) during knee extensions. This rotation or “twist” has been shown to increase the activation of the VMO portion of the vastus lateralis even more than doing knee extensions with the hip adducted (thigh rotated so that the medial portion of the knee is facing mostly upward). Dorsiflexion of the foot (moving the ankles so the toes are pointing toward your head) increases the activation of the VMO by more than 20 percent. This is because the dorsiflexor muscles stabilize the tibia during knee flexion and resist rotation of the tibia on the femur as the knee straightens.

Single-Leg Knee Extensions With a Twist

The three vastus muscles of the anterior thigh are strongly activated by single-leg knee extensions. By adding a twist, you’ll be able to directly activate the VMO portion of the vastus medialis muscle.

1. You should always warm your knees up thoroughly before doing any direct exercise. This is especially important if knee extensions don’t follow another thigh exercise. A few minutes of stretching and some stationary cycling are well worth the investment in protecting and warming up the delicate knee joints.

3. For the first repetition, it’s a good idea to lift the weight with both legs. This is to reduce the stretch and tension that will otherwise be transmitted through the quadriceps tendon to the patella just to obtain enough inertia to lift the weight from the rest of the stack. Straighten both knees so the weight is lifted from the stack.

4. After the initial lift, let the working limb take over and lower the weight. The lift should be slow and controlled, unless you’re fond of tendon, ligament and cartilage damage. 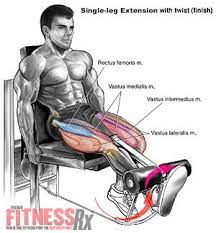 5. The next repetition upward should be done solely by the working leg. This time, about halfway up (and well before the knees are straight), you should begin to dorisflex (pull the toes upward toward your face) the toes of the foot on the exercising leg. At the same time, you should try to rotate the leg inward so the inside of the knee (the side where the vastus medialis sits) is rotated medially (i.e., toward the inside part of the other thigh). If you do it correctly, the big toe of the exercising foot will be facing inward as if you’re pigeon-toed and the surface of the vastus medialis will rotate toward the midline of your body. This “twist,” or rotation, will help to activate the vastus medialis and dorsiflexion, which will help to stabilize the joint and increase activation of the VMO part of the vastus medialis.

6. At the end of the lift upward, the knee joint should be straight, but just slightly short of a total knee lockout. Be careful that you don’t “jam” the knee joint into a fully locked-out position, because this could cause knee cartilage damage, especially with heavy weights. Hold the top position for a count of three before lowering the weight.

7. Lower the weight slowly as you untwist the movement back to the starting position where your knee is flexed to 90 degrees. Just before the weight stack contacts the remaining plates at the bottom, start lifting it upward for the next repetition (yes, with the same leg!).

8. After you finish the first leg of your first set, take a short break and then start with the next leg. As before, start the first repetition with both legs then let your working limb take the load. Complete the set on the second leg and get off of the extension machine and stretch the entire quadriceps group of the exercised limbs.

If you really want to kick your training to the next notch, try adding four to five forced repetitions at the end of your last set or two. As you reach the point of failure (for example, with your right leg) use just enough help from the non-working leg to get the weight to the top, then let the working leg take over completely to lower the weight. Repeat the lowering of the weight with the fatigued right limb and lift the weight upward with both limbs until you’ve completed your forced reps. The downward movement should be slower than the upward phase because you’re resisting the pull of gravity. Start with only one set of forced repetitions following your last set; otherwise you’ll find it very hard to go up and down the stairs for the next few days.

If you’re someone who has a poorly developed vastus medialis and VMO and you want to carve that teardrop into your lower thighs, then you should make sure you’re carefully completing the twists as you’re extending your legs. Even without the twists, the leg extension is a great way to carve and thicken the muscle bellies of each of the vasti muscles. This exercise is certainly not for the faint of heart, especially if you’re adding forced repetitions to the mix. However, if you see this pain as an investment, and if you have the discipline and the drive to push through the torched-enhanced repetitions (especially during the final stages of this exercise), you’ll soon be enjoying your new shape and slabs of shredded, vastus beef.