Skip to content
FitnessRX for Men > Exercises > Abs & Core Exercises > Get Sliced Abs and a Six-Pack
Share This!

A six-pack and cut-to-ribbons abdomen is great to possess, but hard to obtain. Hanging leg raises will work this area with sufficient intensity to make your lower abs and hip flexors burn.

When you train your abdominals, you should always choose exercises that force the muscle fibers to shorten under tension. Stay away from the abdominal exercises that force you to stretch (usually by bending backward) because this lengthens the abdominal fibers under resistance. Longer abdominal muscle fibers can give the appearance of a larger (rounded) abdomen when relaxed, not a flat, tight abdomen and that’s the last thing you want to get from your hard training. Straight leg raises from a chinning bar are among those exercises that will shorten and optimize contractions of the lower abdomen and hip flexors. However, they’ll also work the sides and most of the anterior abdominal wall very intensely.

The rectus abdominis muscle is made of a series of short fibers stacked vertically end-to-end. The linea alba is a thin tendon-like line between the left and right halves of the rectus abdominis of the anterior abdominal wall. Typically, there are three or sometimes four rows of horizontally placed tendons running perpendicular to the linea alba across the rectus abdominis. These make the “blocks” on the abdominal wall. The fibers of the rectus abdominis are short, and they extend from one horizontal tendinous insertion to the next. When the rectus abdominis is tensed, the short fibers bulge between the tendinous grooves, almost like small blocks. This gives your abs the “six-pack” look. The blocks usually end just below the umbilicus (belly button) and then the fibers lay like a flat sheet all the way to their attachment at the pelvic bones. If both right and left halves of this muscle contract, the thighs are flexed forward, which is the case in the hanging leg raise exercise (assuming the pelvis is free to move).

The rectus abdominis has a taper to it, so it’s three times as wide at the top (superiorly) as it is at the bottom (inferiorly). Thus, the upper portions of this muscle do roughly three times more work than the lower portion, which makes it particularly tough to target the lower abdominals.

The lower and posterior part of the abdomen includes the iliopsoas muscle. This muscle is really a collaboration between two muscles, the psoas major and the iliacus muscles. The psoas major is a long, thick muscle positioned beside the thoracic and lumbar vertebral column. The iliacus muscle is a large triangular muscle that sits over the inner surfaces of the iliac bones of the hip. Part of it also lies along the lateral side of the psoas major. The fibers of the iliacus and psoas major attach to a single tendon that connects to a small bump near the head of the femur bone (the bone of the thigh) called the lesser trochanter. The psoas major and iliacus function as a single muscle (hence the name “iliopsoas” muscle). The iliopsoas is the most powerful flexor of the thigh at the hip joint and it’s therefore very active during hanging leg raises.

The external oblique runs from the lower ribs toward the center of your abdomen, where it unites with other slips of muscle fibers to form a flat, fan-shaped muscle. It attaches to the iliac bones of the pelvis and hip structure and also the linea alba. When both left and right sides of the external oblique muscles work together they flex the trunk and move the head toward the feet. When one side contracts, the body twists to that side.

The fibers of the lower abs shorten very little in most exercises and because the rectus abdominis is weaker than other trunk muscles, many other muscles assist it. Nevertheless, hanging leg raises are reasonably good at activating the lower regions of the rectus abdominis, although the iliopsoas muscle is still very much active in this exercise.

1. A straight chinning bar works great for this exercise. You will hang from the bar during the exercise. However, if you find that your grip strength fails before your abdominals are ready to give up, you may want to invest in arm straps that attach to the chin bar to eliminate this problem.

2. Begin with your legs hanging straight down from your waist to the floor. Keep your knees locked (almost completely straight) and slowly raise your legs (hip flexion). Don’t swing, but use a controlled pulling of your hip flexors to raise your legs.

3. Raise your feet as high toward your head as possible, taking care not to bend your knees. Your hip angle (i.e., the angle between your abdomen and thighs) should be 90 degrees or less at the top. Try to curl your pelvis forward to activate the rest of the abdominal wall.

4. Hold your legs in the highest position possible for two to three seconds then slowly lower them to a straight position. Ensure that you don’t swing your legs past a position that would be vertical to your upper body. Such activity could cause excessive extension of the lower back. Furthermore, you would cheat yourself out of a full effort on the next repetition, since the pendulum-like action assists you in getting the legs up for the next contraction. On top of that, the excessive extension could stretch the fibers of the abdominal wall and this isn’t the desired effect of this exercise. The swinging action is harder to control if you’re hanging from a chinning bar as opposed to a leg raise station with a padded back to minimize your body movements, so take extra care when doing this version of the exercise.

5. Exhale during the upward movement and inhale as the legs descend. Avoid holding your breath during the exercise. Holding your breath will be easier because this increases your intra-abdominal pressure (and arc of the rectus abdominis) and stretches the abdominal fibers, but doesn’t allow the muscle fibers to shorten as completely as they should. If the fibers of the abdominal wall are stretched because you hold your breath as you exercise, the fibers will tend to bulge when the abdomen relaxes (which will give you almost a bloated look – and you definitely don’t want that!).

If you find that the straight leg raise is too hard, you can do the exercise with bent knees. After positioning yourself on the chin bar (with your knees straight and your toes pointing toward the floor) bend at the hips (hip flexion) and bend the knees. Try to lift the bent knees as high as possible toward your chest. Hold the top position for a count of two to three then lower the legs toward the floor and straighten the knees as your legs are dropping. The torque component at the hip is much less with the bent knees; this makes the exercise doable for almost everyone. You may need to start with the hanging knee-up version, then progress to the straight leg raise after you’ve built a little more strength into your abdominal and iliopsoas muscles.

In the hanging leg (or knee) raise, the spine is unloaded and not stressed. This makes the hanging leg raise a much better exercise than lying leg raises, which create huge torques through the lumbar discs.To add some variety to the exercise, while also tightening both the internal and external oblique muscles, you can twist the legs to the right on the first repetition as you raise your thighs, then twist the legs to the left on the next repetition. Don’t twist too quickly or this will generate unwanted torques across the lumbar vertebrae.

It’s not possible to selectively recruit the lower fibers of the abdomen without also activating other abdominal fibers and muscles. But no matter what exercise you choose, it’s important to recognize that no exercise will perfectly carve deep ridges across your abdomen if it’s buried in fat. The best strategy for improving abdominal shape and definition starts in the kitchen with a clean diet; it also wise to include some cardio at the end of your routine such as 20 to 30 minutes of treadmill walking, stationary cycling, jogging, etc. It doesn’t have to be sophisticated, but cardio can increase your metabolic rate both during and after your training. The best combination is to engage in cardio to utilize the fat calories as an energy source and use hanging leg raises to tighten and strengthen your lower abdomen. With persistence and a few months of hanging leg raises under your belt, coupled with intelligent diet and aerobics, your lower abs will be tighter, stronger and sliced to ribbons.

6. Robinson M, Lees A and Barton G. An electromyographic investigation of abdominal exercises and the effects of fatigue. Ergonomics, 48: 1604-1612, 2005. 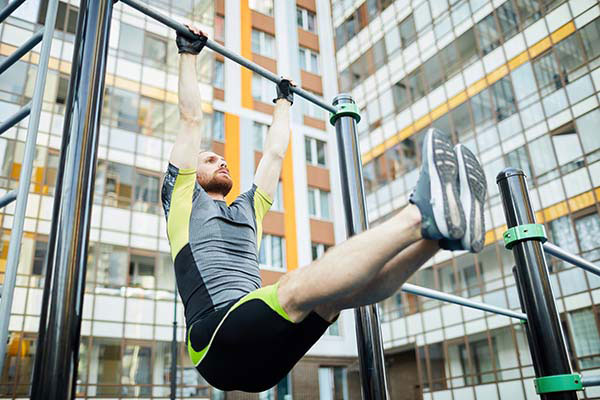