How many times have you seen guys in the gym with big arms and pencil legs, who always wear sweats and are ashamed to show their lower body muscles? They spend hours working on abs, chest and arms, but ignore their thighs, glutes and calves. On the rare occasions when they wear shorts, their bodies look unbalanced.

Strong, well-shaped lower body muscles form the basis of an athletic-looking physique and a strong, powerful body. No other exercise builds your lower body muscles – glutes, hamstrings, quads and thigh adductor muscles – better than squats. Also, squats build the core muscles in the trunk, such as the abs and spinal extensors, that stabilize the spine and help transmit forces between the upper and lower body.

Most movements used in popular sports, such as golf, tennis, skiing and volleyball, begin in the athletic position – knees bent, butt down, kneecaps over the toes, shoulders square, back arched slightly with slight bend at the waist, chest over the knees and the head in a neutral position. Squats build strength in this position. Sprinting fast or jumping high largely depends on the power of your glutes to extend your hips. No other exercise develops the glutes better than squats. People with giant arms and chests, but underdeveloped legs, may look strong, but they lack the tools to perform powerful movements. Not only do their lower body muscles look weak, but they also lack the power to run fast, jump high and avoid injury.

The squat is a misunderstood exercise. Many people think squats are bad for the knees, back and heart, and that they decrease running speed and jumping ability. If done correctly, doing squats decreases the risk of leg and back injuries, reduces resting blood pressure and improves athletic performance. Also, squats build strength and power in most of the large muscle groups in the body and give you a fit-looking athletic physique unequaled by any other exercise. This post will teach you the fine points of squatting that will help you develop whole body strength and power and well-shaped, athletic-looking lower body muscles.

Safety is the first consideration when doing squats. Use good equipment that won’t break down during the lift. Clear all debris from the squatting platform. Use a rack that allows you to perform the lift without excessive forward or backward movement and that won’t fall over when moving the bar on or off it. Use collars and a straight bar to prevent weights from falling off during the exercise. (Bars will sometimes bend dangerously after years of use).

Lifting belts and wraps increase the weight you can squat. Don’t use them when training with submaximal loads. Squats use many muscles as stabilizers. Training with a belt and wraps decreases the stress to these muscles, so they don’t benefit fully from the exercise. Also, wraps can put excessive stress on your kneecaps (high patellofemoral compression) and contribute to kneecap pain (chondromalacia patella). Wear wraps and belts for max lifts only; otherwise, leave them in your gym bag.

Wear a good pair of shoes that provide lateral support. Consider purchasing a pair of weightlifting shoes if you get serious about this exercise. Otherwise, a good pair of cross-training shoes will do. 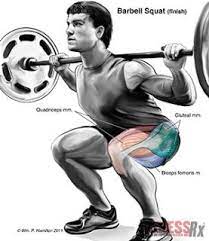 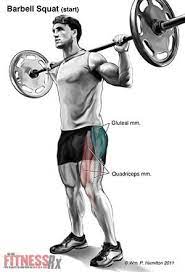 Bar placement. Place the bar on the rack so you only have to lift it a few inches to begin the exercise. Put the bar on the fleshy part of your upper back so you create a solid foundation for the lift. Adjusting the bar up or down on your back will alter the stresses on your knees and hips. Experiment with different positions to determine which feels best. The bar will feel uncomfortable on your back at first, so consider wrapping it with a foam pad, towel, or padded yoke.

The stance. Stand with your feet approximately shoulder-width apart. Adjust your feet so you’re comfortable during the lift and can go to parallel during the squat. Most people point their toes outward slightly 40-45 degrees, which helps align the femur and pelvis for a powerful contraction during the pushing phase of the lift. Widen your stance if you can’t reach parallel with a narrow stance. People with long legs and short torsos should use wider stances, while people with short legs and long torsos should use narrower stances. A comfortable stance allows you to squat without excessive forward lean.

The descent. Squat until your hips are lower than your knees (thighs below parallel). Begin your descent by gliding your hips backward before breaking your knees (a backward movement of your butt). Keep your torso upright and avoid excessive forward lean so your hips stay under the bar at all times. The movement is similar to sitting in a low chair or on the toilet.

Keep your weight over the arches of your feet, which will keep you from bending over at the waist or sitting back on your heels as you do the active (pushing) part of the lift. Placing too much weight on your toes will make your hips rise faster than your shoulders, which will make the movement look more like an exercise known as the good morning (back extension from a squat position). Keeping your back arched and head in a neutral position (not down or up) will place your center of gravity over your hips and legs and put you in a powerful position for the active phase of the squat.

Ascent or pushing phase. Push out of the bottom position following the same path you used during the descent phase. Keep your torso and back erect and maintain your hips under the bar throughout the pushing phase of the lift. As you push, strive to extend your hips and knees at the same rate. Extending your knees prematurely will place excessive stress on your low back muscles and subject your spine to dangerous shear forces and back injury. The low back muscles should maintain a stable spine so the force from your legs can be applied directly to the weight and help you complete the lift successfully. Try to explode upward during this phase so the motion is smooth and fluid.

Lifting tempo. A good rule of thumb is to go down slowly (under control) and up fast. The descent phase should take one to two seconds, so it’s not excessively slow. Dropping too fast during the descent phase causes dangerous stresses on your knees and spine because the knee and hip extensors must exert more force to slow down the movement. Descending more slowly helps you maintain good form that puts you in a powerful position during the pushing phase of the lift and decreases the risk of injury. Descending slowly may also increase the stress on your muscles so you get a better training effect.

Breathing. Try to breathe in during the descent phase and breathe out during the ascent phase. Once the load exceeds 80 percent of maximum weight, it’s difficult or impossible not to use the Valsalva maneuver – increasing the pressure in the abdomen by closing the epiglottis and activating trunk and abdominal muscles. Valsalva causes large increases in blood pressure, but increases pressure in the abdomen, which stabilizes the spine during the squat so you can lift more weight. While it may be dangerous for people with weakened arteries (aneurysms), the Valsalva maneuver protects the spine and increases squatting power.

Returning weight to the rack. Blood pressures measured directly inside the arteries have reached as high as 480/350 mm Hg during heavy squats (resting blood pressure is 120/80 mm Hg). This can compromise blood flow to the brain and leave you dizzy and disoriented. Let your spotters help you return the bar to the rack. They should make sure that your hands are clear of the supports when re-racking the weight. Even the strongest lifter can lose control after doing a heavy squat. It’s not unusual for healthy weightlifters to pass out during or after doing squats. Spotters should be vigilant when assisting with this exercise.

Progression. Few things look more ridiculous than a person who loads the bar with a monster weight and squats down two inches. “Curtsey” squats do little to build leg muscles or improve lower body power. Start with a lower weight – the bar if necessary – and do the lift correctly. Don’t add weight until you can do the exercise without breaking the position and keeping your back straight. At first, do 10-20 repetitions per set until you develop the flexibility and muscle endurance to do the lift using good form.

Do step-ups on aerobic boxes or flat benches if you have never done any weight training for your lower body. Start by stepping up on the bench or box using your bodyweight as resistance. Step up using your left leg then your right leg. Do the exercise holding a dumbbell in each hand as fitness improves. Later, perform the exercise with a barbell on your back. When you can do step-ups comfortably using a barbell, you are ready to begin a squat program.

Wright, G. A., T. H. Delong, and G. Gehlsen. Electromyographic activity of the hamstrings during performance of the leg curls, stiff-leg deadlifts, and back squat movements. J Strength Cond Res, 13:168-174, 1999