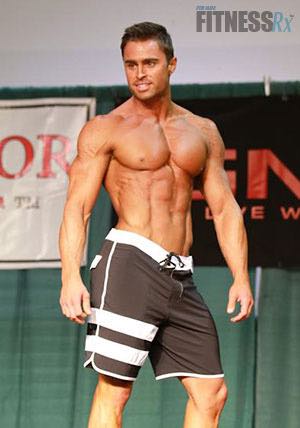 You have to work with the cards that you are dealt in life, but that doesn’t mean you also have to fold when the hand is not an automatic winner, either. IFBB Men’s Physique Division pro Jason Poston can certainly attest to that and remind all of us that challenges in life need to be met head-on and not avoided.

The native of Dallas, Texas lost his vision earlier in life due to a rare disease called keratoconus. Only a cornea transplant corrected this and Poston was able to see again, but that was not to be the last of his medical problems.

Always an athletic person, the now 30-year-old began bodybuilding at 19 and also played sports at the recreational level. But he began to focus more on the Iron Game in 2008.

"I won the BSN Fitness Model Search at the Europa in Dallas (that year) and that motivated me to take the physique route with my body," Poston fondly recalls. "I wanted to be signed by a supplement company and inspire others to live healthy lives."

But while he was looking ahead on his possible future, his body was developing Type-1 diabetes. "I battled back and forth to attain size," he says.

Things got so bad that Poston had lost 50 quality pounds off his 5’10" frame and began showing more symptoms of the diabetes that he still hadn’t discovered. But hearing a simple question in a public setting put Poston on a different path and one that probably saved his life.

"I was sitting in church one day and during his sermon, Pastor Matt Chandler asked the congregation, ‘when was the last time someone said that they wanted to be like you?’ and no matter how hard I tried, I couldn’t remember the answer to that question," recalled Poston. "So from that point on, I began searching every avenue of my symptoms and how to get healthy."

Nine months after he began showing signs of diabetes, Poston was admitted to a local hospital after his blood sugar level came back at 550 – a comatose level. But he was misdiagnosed as having Type-2 diabetes, prescribed Metformin and sent home. This did not help his situation and may have even exasperated it.

"I was then contacted by a diabetes specialist who prescribed me insulin and within five minutes of taking it, I felt alive again," he says. "That was literally the start of a new life for me."

Within three days, Poston had regained 15 pounds and doubled that after a month. He had bounced back so well that he entered the 2011 Oklahoma City Grand Prix eight weeks after being properly diagnosed and placed fifth. Now that he was back and better then ever, Poston signed up for the 2012 NPC Ronnie Coleman Classic and won the overall and qualified nationally.

He placed eighth at the Junior Nationals in Chicago but earned his IFBB pro card at the USAs a few months later. "My goal had been attained even quicker than I thought," says Poston, who placed a very respectable third in his IFBB inaugural show at the Houston Pro.

The personal trainer and online nutrition coach for Inferno Fitness has an incredible outlook on life and makes it easy to root for him moving forward.

"Even though I’m 10 years into fitness coaching, I believe that it’s only the beginning and the trials and tribulations I’ve endured were all necessary for me to be the best coach I can be."