“Progressive resistance” has been the primary principle among lifters since weight training first began. The principle is typically applied by adding greater load (“resistance”) during workouts over time (“progressively”). For example, if you can do 12 repetitions with 25 pounds in a given exercise, the next workout you would increase to 30 pounds, likely for 8 to 10 reps. Then in successive workouts you would increase back up to 12 reps with that weight, at which point you would move up to 35 pounds in the next workout and repeat the process. This can work for quite a while. It’s the way most of us have added mass to our frames.

But while progressive resistance by increasing the load can serve weight trainers well for many years, especially during youth, the principle ultimately starts to betray us. The human body has its limits. Heavy weights over a long period of time will place great stress on your joints and connective tissue. The aging process itself plays a part. I am seeing so many of my “mature” bodybuilding friends, including former IFBB pros, now having to undergo shoulder, hip, or knee replacements.

The problem with “progressive resistance” is the implication that progress requires using heavier and heavier weights. We think of it as simple arithmetic. So, most of us buy into the premise that reducing the poundage will reduce our progress. Overcoming this mindset can be difficult, especially for those of us who have built our physiques by heavy loads for many decades. Look, like many of us who have trained for decades at Bev’s Gym, the famous “East Coast Mecca,” I like to take my stab at the big weights. It makes me feel like I accomplished something at the end of a workout. “Going light” or even “lighter” makes many of us feel, deep in that irrational corner of our psyches, that we are half-assing it, selling out, or wasting our time. Even the most experienced among us can fall prey to the “go heavy” whispers of our internal egos.

Enter, the lockdown. Here in New York, gyms have been closed since March. We can debate the merits of such a long-term statewide gym closure, but that’s for another time. For those of us who self-identify as bodybuilders and for whom “gym life” was part of our standard routine, it’s disconcerting. Some peeps chose to take some time away from the gym. I wasn’t one of them. I set up a modest training area in a little corner of my basement and continued training. I’ll save the equipment specifics for another time, but suffice it to say that I am seriously limited in terms of the “resistance” poundage. No Olympic barbells, no fancy machines. I couldn’t do heavy compound barbell movements like squats, benches or deadlifts. So, I opted for what compound bodyweight and dumbbell movements I could, and mostly relied on various isolation movements. I’d built a good amount of mass from 40 years of lifting, but my question was whether I could maintain or even grow by employing creative alternatives to heavier loads.

So, here’s my take. I think “progressive resistance” is a terrible name for the training process of building muscle. In the end, it leads to injury, especially for older trainers. Rather than thinking in terms of progressive resistance, I suggest the far better name (and concept) is progressive intensity. I believe that we can continue to progress as while lifting weights, even after decades of training, by focusing on intensity, not resistance. Sure, greater resistance is a method of increasing the intensity. But it’s only one method of many. And, especially after the age of 50, I think it is of lesser value than other variables and potentially counterproductive due to its stress on joints and connective tissue.

The popularity of blood flow restriction training is a testament to the effectiveness of lower load training for muscle growth and strength (avoiding the joint and connective tissue stress caused by heavy weights). While it’s beyond the scope of this article, research supports that the use of bands to restrict blood flow to the working muscle can stimulate hypertrophy with as little as 20 percent of a one-rep maximum. You can check out this recent article for more information on this training method: https://www.ncbi.nlm.nih.gov/pmc/articles/PMC6530612/. 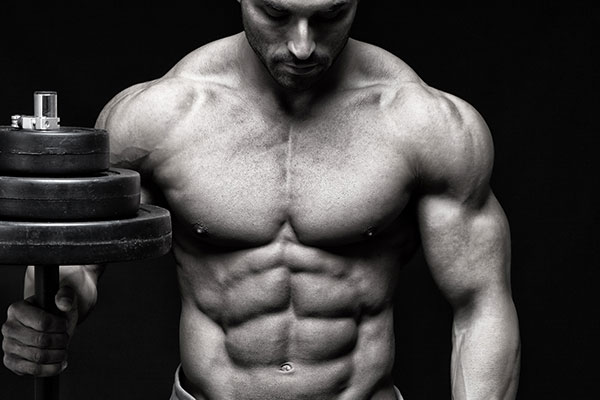 More well-known and traditional intensity principles can also be used as alternatives to heavier weights. All of these training methods work particularly well in the home gym environment, and are great for more mature lifters to add intensity with less wear and tear on the joints, tendons and ligaments.

More Reps. Keeping a muscle under tension for a longer time is a method to force a muscle-building adaptive response. One way to do this is with sets consisting of higher repetitions. At the same cadence, a set with 20 reps will keep the muscle under tension for twice as long as a set of 10 reps. How many reps is too many (i.e., how long is too long) remains controversial and likely depends on individual physiological characteristics as well as the speed of performance (see below). But increasing the reps to 12, 15 or even 20 can spur a great pump and provoke new growth.

Slower Reps. Another way to extend the time under tension is by slowing down the reps. This can be done either by doing the whole set “super-slow” (e.g., a count of 6 seconds for both the concentric and eccentric contractions, for a total of 5 repetitions) or by slowing down only the eccentric (negative) portion of the movement. Either way, a lighter weight will “feel” heavy as lactic acid builds and the muscle fatigues. A set of only 5 reps, with 6 seconds to raise the weight and 6 to lower it, will take a full minute. Trust me, you’ll feel it!

Pre-Exhaust. By doing an isolation (single-joint) movement and following it with a compound (multi-joint) movement to target the same muscle, you will pre-fatigue the muscle with the first movement and need less weight for the compound movement. For example, you could do dumbbell flyes for chest and then immediately follow them with dumbbell bench presses or push-ups. IFBB pro Mike Mentzer was one of the proponents of this training style.

Supersets. This technique can be done in one of two ways – either with two exercises for the same body part (e.g., two different deltoid movements) or with two exercises for different body parts (e.g., a triceps movement and a biceps movement) without a rest between them. For our purposes of reducing the load, picking two movements for the same muscle will surely mean you’ll need less weight in the second exercise to feel the intensity.

Shorter Rest Intervals. Simply taking less time between sets will require a reduced load, although my experience is that too little time prevents adequate recovery. For me, less than a minute between sets hampers my ability to put on muscle size.

Higher Volume. Actually, of all the intensity principles outlined, I have found this has made the most significant difference for me during lockdown. Even though I reduced the poundages, I have maintained muscle size by simply doing more sets than I usually would. When I’m in the gym and handling heavier weights, I tend to feel over-trained when I do too many sets for a muscle group. But training in my basement with lighter weights, I feel like my body needs the extra sets. I’ve been doing high-rep push-ups in “sets” of as many as I can do with one or two minute rest intervals until I do 300 push-ups. My chest has lost NO size even without bench presses.

So, there you have it. I don’t know when this lockdown will end and I will escape from my basement quarantine. But I do know that my joints are feeling good these days, and my muscles aren’t disappearing even without the gym. When I get back to Bev’s, I will focus on progressive intensity over resistance. Hopefully I’ll get another wave of progress!

Rick Collins, Esq., CSCS [https://www.rickcollins.com/] is the lawyer who members of the bodybuilding community and dietary supplement industry turn to when they need legal help or representation. [© Rick Collins, 2021. All rights reserved. For informational purposes only, not to be construed as legal or medical advice.]