Skip to content
FitnessRX for Men > Training > Workout Tips > The Best Training Tips Ever > Lunges for a Stronger Lower Body
Share This!

Besides being born with the best genes possible, how can you jump higher, climb better or run faster? Perhaps such goals might be only to get to the ball in a pick-up game of basketball, or maybe you need to run faster if only for a few strides to get to a softball bounding in the infield or a basketball burning up the court. Maybe, this last winter season of skiing or snow boarding was disappointing for you because your thighs were always fatiguing and letting you down on the long runs. If any of these apply to you, then it is time to inject some serious training energy into you hip and thigh musculature and to power up these pistons of your lower body. With lunges, you will be surprised how quickly you will begin to show improvement in muscle power and general body balance, and this will give you a nice edge on any court, hill or field.

The hip structure and the muscles that surround this area provide the base of your lower body power and drive. Part of the spring upwards in an attempt to dunk a basketball requires that the hip and knee extensors are strong and powerful springs. The lunge exercise strongly activates and imparts explosive power to the gluteal muscles, the hamstring muscles of the posterior thigh and the quadriceps muscles of the anterior thigh. It is therefore ideal for providing a base for your improvement on the court, or in the field. Of course, it has the added benefit of tightening your thighs and gluteals for the pool scene this summer.

There are three sets of gluteal muscles. The gluteus maximus is the largest and thickest hip muscle and it contains the strongest and largest muscle fibers in the body. The upper attachment of the gluteus maximus is on the hipbones and the lower attachment is on the posterior side of the femur bone of the thigh below the hip joint. This strong muscle pulls the thigh posteriorly (backward) in an action described as thigh or hip extension. 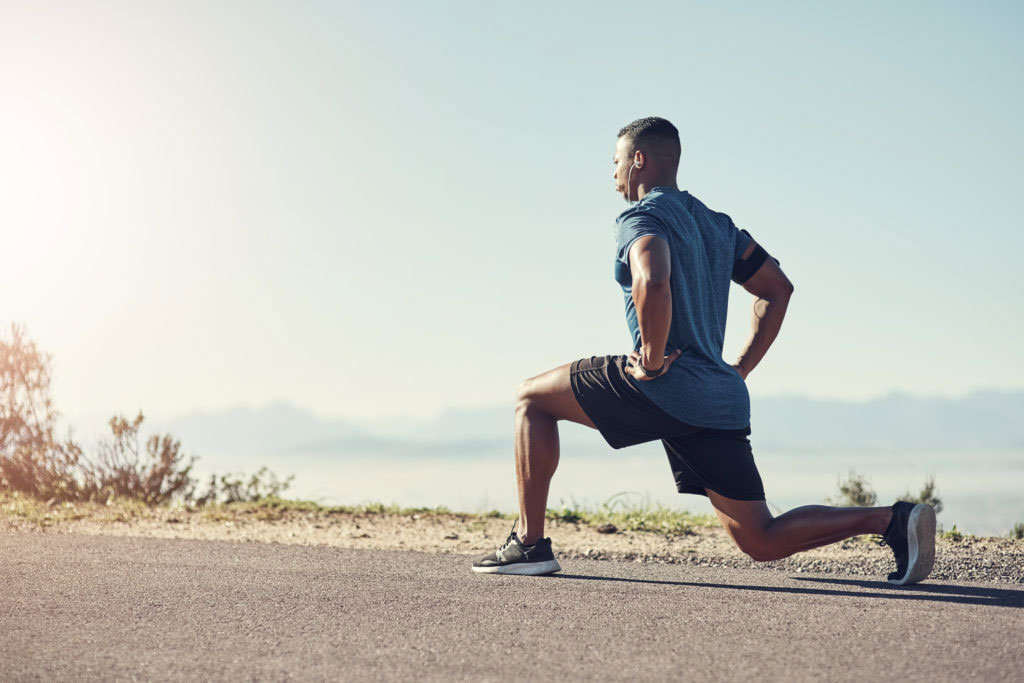 The gluteal, hamstring and quadriceps muscles are all very active during the initial thrust back to the standing position (leg extension and hip extension). A deeper lunge and greater stride will provide a superior stretch and this will improve activation of all of the affected muscles. However, you must work into this slowly.

You should stretch your hamstrings, calves and quadriceps prior to beginning the exercise. Be careful that you do not bend forward from the waist during the lunge. If so, you are likely using too much weight and/or your stride is too short. The second common mistake is that the front knee angle is too acute at the lowest part of the lunge, and this is correctable by taking a longer stride into each lunge.

The surrounding musculature such as your middle and lower back and your calves will also be activated during lunges, providing an added bonus to your overall training goals. The combination of muscle activations makes the lunge an all-around effective exercise that will translate into gains that will carry over to the fitness and recreational arenas of your choice.

Maybe lunges will not give you enough of an advantage to dunk a basketball if you are 5 feet tall, but it will provide more power and leap in your attempt than ever before. Give lunges a try for two months and you should see a whole new wave of power that begins at your hips as a base and moves both up and down your entire torso like power-packed pistons.