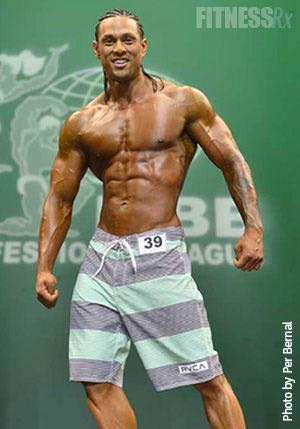 Taking advantage of a great situation is not as easy as it seems. That was certainly the case for Mark Anthony Wingson, who had been training for nearly 15 years but did not see a clear path for his future as a competitor. So he relied on advice from the two people that he had in his life that he knew would steer him in the right direction, but he still had to do the hard work himself.

"I was encouraged to compete in the Men’s Physique Division by four-time Mr. Olympia and my best friend, Jay Cutler," the 5’10", 215-pounder said. "Also by my coach, the Guru – George Farah."

With a lean and aesthetic look, the man known as Mark Anthony in the industry had the perfect body for the new division that had taken the NPC by storm just two short years ago. Anthony quickly earned his IFBB pro card at the 2011 North Americans as the Class-B champion and kept the momentum going once entering the professional ranks.

Going three-for-three right out of the gate, Anthony won the 2012 LA Pro Grand Prix, Europa Pro Super Show (Orlando) and the prestigious New York Pro, putting himself square into the mix heading into 2013 as the one to beat.

"I have always said that the MPD is the evolution of bodybuilding," he says. "Now that we have the Olympia stage (with the addition of MPD to Olympia Weekend) as our platform, MPD will blow up tremendously. I encourage athletes to compete with the NPC – the best organization in the world."

With it being so new, MPD has the potential to bring out the industry’s next superstar to the public and that is something that Anthony hopes to be a big part of. "The mainstream finds (us) very appealing because (we’re) what most men desire to look like," he says. "With great nutrition, supplementation and intelligent training, this look is very attainable. Living a healthy, fit and athletic life – not only for the look but also the longevity aspect of it."

Of course, Anthony also recognizes some of the fringe benefits of being up on stage. "MPD has attracted many more fans to the sport, plus the ladies love it!"

Surely, he thanks Cutler and Farah every time that he hears those women cheering for him and his MPD brethren.

Be sure to visit Mark Anthony’s official website: http://www.markanthonyw.com