The evolution of modern weight-training equipment and gyms has created a paradox. On one hand, it’s allowed us to move quickly and easily from one exercise to another; the machines have eliminated the tedious task of breaking the bar down after the exercise. However, excessive use of the machines, especially for the lower body, robs the gym rat of a structural mass base from which to refine for competitive purposes. Muscular thighs with definition emanating from every fiber aren’t built on leg extensions alone. Rather, some form of barbell squats is the best strategy to obtain sculpted thighs.

Squats add to the mass and depth of the anterior thigh muscles. In addition, the gluteal muscles, smaller hip muscles, lower and middle back, hamstrings and even the calves are all activated to some extent during this exercise. Does this mean that to have great thighs you must possess a sadistic gene that pushes you through the pain barrier toward exhaustion on every set? Probably not, but gut-busting work is necessary to maximally enlarge the thighs and there’s no better exercise than barbell squats. 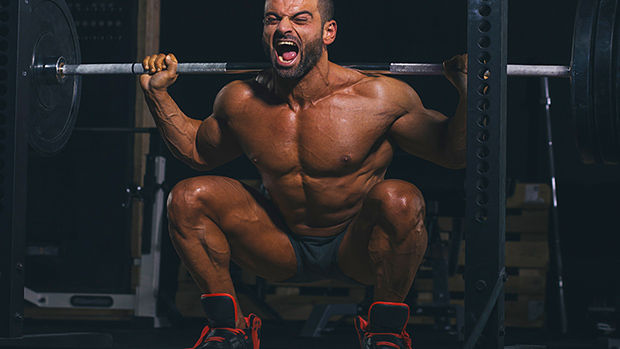 Barbell Squats in a Power Rack

1. Position your squat bar on the support bar in a power rack. The bar should be about mid-chest level when you’re facing it. Warm your knees up with lighter weights in the early sets and save the heavy stuff for the final three or four sets. Set the height of the lower safety bar of the power rack about two inches lower than the bottom position of your squat.

2. You may find that the heavy barbell will be very uncomfortable (even painful) as it rests on your upper trapezius and this will detract from your ability to concentrate on your quadriceps muscles. Most gyms have a bar pad you can wrap around the middle sections of the bar before setting up for the squat. Alternatively, you can wrap the center of the bar with a towel, or place the towel across your upper trapezius so the bar will rest on the towel. If you wrap the bar, be certain it won’t loosen during your set.

3. Grip the bar firmly with a wide grip. Place your head under the bar and bend your knees slightly. Position the wrapped bar high across your shoulders and the upper trapezius muscles (but not on your neck).

4. Keep your head up and tighten your back. Place your feet about shoulder-width apart. Lift the bar from its starting position on the power rack (don’t jerk the bar) by extending (straightening) your knees. Make sure you have full control of the weight before moving into position.

5. Take one step backward, just enough to clear the upper rack supports, so you won’t hit it during the exercise. Place your feet a little wider than shoulder width with your toes pointed slightly outward. Keep your head up and your back straight and tight, but maintain its natural curves. Again, make sure you’re in control of the weight, not the reverse, before beginning the squat.

6. Control the weight as you slowly lower your buttocks toward the floor by allowing your knees to flex. Continue squatting downward until the tops of your thighs are parallel to the floor, or when your knee angle has reached 90 degrees.

The lowest safety bar on your squat rack should’ve been set so it doesn’t contact the barbell at the bottom of the squat. Nevertheless, it should be high enough to “catch” the bar without excessive knee flexion if, for some reason, you fail during the set. It’s best to have a spotter to help you on the heavy sets, but even spotters can mess up. Therefore, it’s important to have properly positioned the lowest safety bar of the power rack before beginning your set.

Never bounce into or out of the bottom position. Such sloppy lifting will only result in knee injuries, not giant thighs. After you’ve reached the bottom, stand up in a smooth, fluid movement. Stop just short of fully locking out your knees, thereby maintaining the tension on the anterior thigh muscles. Keep your back tight and flat and your head up on the way up and on the way down.

All four quadriceps muscles are strongly activated during the ascent. However, the relative degree of muscle activity differs among these muscles. The tension in the vasti muscles diminishes as you approach the top portion of the lift (with knees straightened). Conversely, the rectus femoris is less active at the bottom (flexed knee and flexed hip position), but becomes more activated when the hip and knee are being extended. Since the gluteus maximus muscle is such a strong extensor of the hip, it’s very active during the ascent of the squat. The hamstring muscles can also be activated, particularly since they also act to extend the hip. The erector spinae muscles achieve a moderate isometric contraction during the lift to keep the back flat.

By keeping your head up when squatting, you’ll ensure your back is straight and flat. Excessive forward flexion of the torso will allow you to lift a little more weight, but it’s done with the back extensors and gluteal muscles rather than your quadriceps. Bending forward also increases the risk of lower back injury. While a little hip flexion is reasonable during squatting, this shouldn’t be excessive. After all, you’re not trying to be a powerlifter.

Some preferential muscle development in one or both of these areas is possible with squats, but the very similar anatomical positioning makes such specialization difficult. For example, if you bring both feet close together with toes pointing slightly inward (thus, a medial rotation of the hips, which brings the knees close together), the vastus lateralis will achieve a slightly greater activation because of an increased stretch on this muscle during contraction. This will accentuate the lateral “sweep” in your thighs. A wider foot placement and especially pointing the toes outward (lateral rotation of the knee and hip) will increase the preferential contractile activity of the vastus medialis, thereby accentuating the “tear drop” above the medial side of the knee. Because the rectus femoris and vastus intermedius insert in the middle of the patella, variation in foot stance will have no effect on the activation of these muscles.

Often, good weight trainers can approach leg training thinking they can only be successful if they’re crawling out of the gym after the squats are completed. Usually, this defeatist philosophy results from improper exercise form (e.g., bending forward, lifting too much weight, lack of concentrating on the quadriceps). Sure, you must train heavy, but you must also feel the weight and concentrate on your quadriceps during the exercise. It’s not necessary to start with the mindset that squats should be so exhausting that the cardiology team must be notified at the end of your sets. Rather, think “quads” during your squats, but don’t focus on exhaustion. This will result in an immediate difference in your squats and a huge difference in approaching giant size and the responsiveness of your quads.

Earl JE, Schmitz RJ and Arnold BL. Activation of the VMO and VL during dynamic mini-squat exercises with and without isometric hip adduction. J Electromyogr Kinesiol, 11: 381-386, 2001.