Synergy is a phenomenon that occurs when combining one stimulus with another causes an effect greater than either stimuli alone. In other words, one plus one is somehow greater than two. The counterintuitive outcome from the synergistic effect makes it seem almost magical. Yet, the truth is, the synergistic effect can typically be understood when each stimulus triggers a similar influence that when combined provides a relatively superior impact. Recent scientific evidence indicates blood flow restriction (BFR) training combined with betaine supplementation possesses this seemingly mystical synergistic effect on muscle tissue resulting in remarkable muscle growth and strength.1 Since both betaine and BFR individually promote fluid influx into the muscle cell causing the muscle cell to swell, which ultimately boosts lean body mass and strength, a combination of both BFR and betaine should promote even more muscle swelling for greater synergistic gains in lean body mass and strength. Moreover, employing BFR training with betaine supplementation should provide greater strength and muscle mass while lifting considerably lighter loads than typically required for maximal strength and size gains. Taken together, the ability to considerably increase size and strength with lighter weight provides an excellent alternative training approach that minimizes risk of injury while providing a resistance training protocol for the elderly, who normally do not lift heavy weights.

Proper BFR training is typically accomplished by wrapping either elbow or knee straps just above the muscle you want to train without wrapping too tightly, as you must not completely occlude blood flow for safety reasons. For the standard approach to BFR training, it is necessary to keep the wraps on for the entire exercise, providing ample time to trigger the biochemical and physiological effects that strongly augment muscle growth without occluding blood flow for more than 20 minutes in total. Typically, four to five sets are performed at roughly 20 to 30 percent of your one-repetition maximum (1RM) with at least the last few sets taken to muscular failure2,3, all while resting less than one minute between sets. It is also very important not to exceed 50 percent of your 1RM, as heavier weights seem to defeat the BFR influence, mitigating any beneficial results from this form of training. 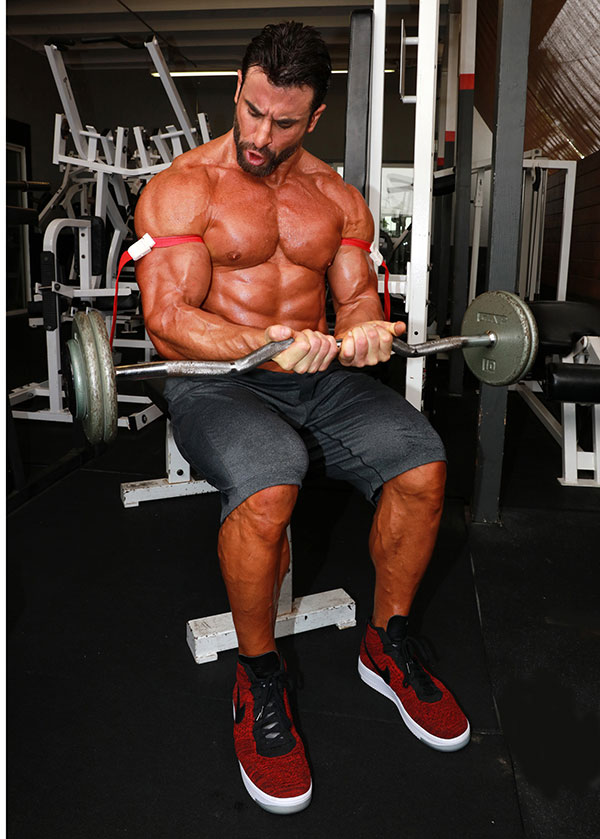 BFR training performed correctly permits adequate blood flow to the muscle while slightly restricting the flow of blood just enough to cause some blood to pool around the muscle. The pooling of blood around the muscle tissue causes an accumulation of metabolites in the muscle cell, which forces fluid into the cell, ultimately causing the muscle cell to swell. This swelling effect triggers mechanosensors within the muscle cell membrane that elicit several anabolic pathways, including the well-known mTOR pathway, that together crank up muscle protein synthesis, promoting muscle growth.4

Interestingly, cell swelling has been shown to be a key component of the anabolic response that, when prevented, blocks the typical anabolic response.5 One investigation by Fujita et al.6 established this link between BFR training and mTOR-driven muscle growth. In this study, six male subjects performed four sets of 15 repetitions of leg extensions at 20 percent of their 1RM with 30-second rest intervals with and without the BFR. Remarkably, the BFR-trained group showed an increase in mTOR activity that was three times larger than the group exercising under normal conditions. This study also showed that BFR training led to an increase in IGF-1 levels that were comparable to those seen in other studies where test subjects performed high-intensity resistance exercise. This substantial increase in IGF-1 levels may directly activate mTOR and muscle protein synthesis. 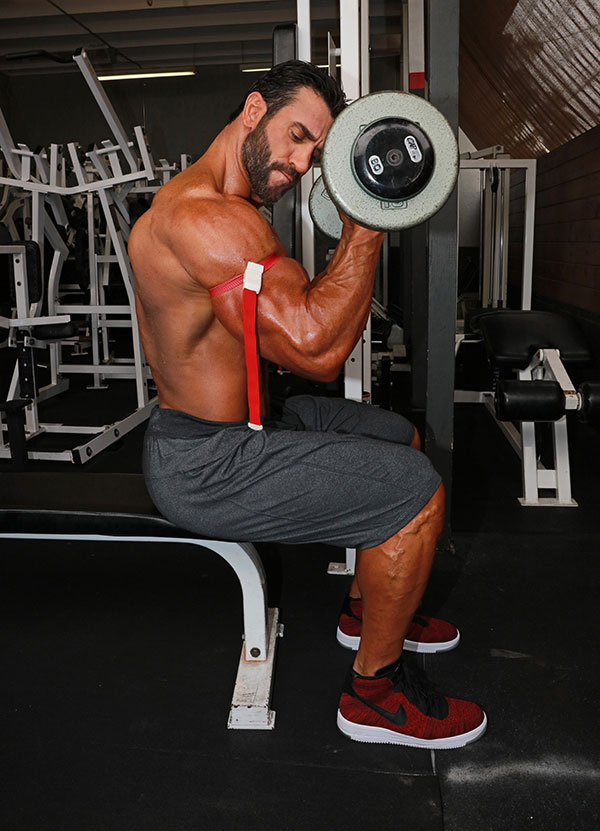 The ability of BFR training to induce muscle swelling should be potentiated by the natural osmolyte betaine, as this compound normally protects the cell against dehydration by increasing cellular water retention through osmosis. The ability of betaine to maintain hydration also gives this compound the capacity to reduce the negative impact dehydration can have on exercise performance such as increased heart rate, increased rate of glycogen degradation, elevated muscle temperature, and increased lactate levels. Betaine’s role as an osmolyte most certainly contributes to the independent muscle-building influence of betaine by causing an influx of fluid into the muscle cell, which induces muscle cell swelling, stimulating protein synthesis and decreasing protein breakdown in the muscle cell, resulting in muscle growth.8-10

In addition to betaine’s ability to counter dehydration and trigger muscle hypertrophy, betaine also plays a key role as a methyl donor in the biosynthesis of the muscle-building compound creatine.11,12 Indeed, it has been shown that betaine ingestion between 2 to 6 grams per day significantly increases anaerobic power in the bench press and squat which likely stems, in part, from betaine’s role in creatine production in the body.13 Taken together, the diverse impact of betaine on these relatively distinct aspects of exercise performance, especially on muscle cell swelling, underscores the tremendous promise of betaine as a nutritional supplement especially when combined with BFR training.

The ability of betaine to increase cellular water retention within the muscle cell should heighten intracellular fluid influx brought on by BFR training, ultimately leading to an even greater exercise-stimulated anabolic response. In fact, BFR training with betaine supplementation represents a way to improve muscular performance synergistically while lifting much lighter loads, providing a practical training benefit for anyone simply wanting to lessen their training load while still advancing size and/or strength. The combinatorial approach employing BFR training with betaine intake also provides an invaluable clinical aid to improve muscular performance in the elderly, ultimately preventing the typical loss of muscle seen in the elderly that can severely diminish quality of life.

For most of Michael Rudolph’s career he has been engrossed in the exercise world as either an athlete (he played college football at Hofstra University), personal trainer or as a research scientist (he earned a B.Sc. in Exercise Science at Hofstra University and a Ph.D. in Biochemistry and Molecular Biology from Stony Brook University). After earning his Ph.D., Michael investigated the molecular biological effects of exercise as a fellow at Harvard Medical School and Columbia University. That research contributed seminally to understanding the function of the incredibly important cellular energy sensor AMPK – leading to numerous publications in peer-reviewed journals including the journal Nature. Michael is currently a Senior Scientist working at the New York Structural Biology Center where he investigates the molecular nature of human illness and disease. 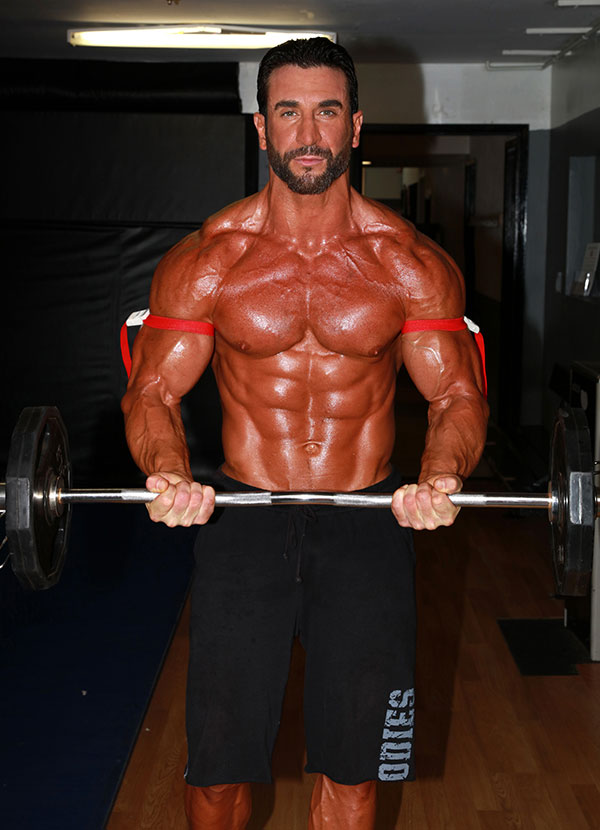