When you apply your hard-trained upper body muscles to recreation or sport events, you will rarely activate one muscle at a time. Instead, your movements will be a concert, with back, shoulder and arm muscles working together in a smooth rehearsed fashion. Perhaps you don’t have a particular sports application, but you just want to get a great upper body workout as quickly as possible. If you have a busy schedule it’s not time-prudent to do 10 different versions of an exercise to get a full upper-body workout when a more complex but intensive upper body exercise will fully activate the same muscles.

One of the best compound upper body exercises is the medium grip pull-up. It will improve your upper body muscle fitness strength and stamina without bankrupting your time budgeted for training. Pull-ups (or chins) provide an excellent way to stress most of the muscles in the middle and upper back, shoulder, chest and arms and therefore, it’s an outstanding upper body exercise. This exercise is effective and will improve your athletic output whether you are going after a rebound in a weekend pickup game of basketball, or out for a leisurely canoe trip in the wilds.

Many muscles are involved in the pull-ups, which makes it a difficult but extremely productive exercise. This includes everything from the intrinsic muscles of the hand to grip the bar, to the forearm and upper arm muscles that help in the pull upwards, to the host of deltoid and upper back muscles that are strongly activated in this exercise. The major muscles involved are described below.

The latissimus dorsi muscle (from which the abbreviated term “lats” has been derived) is one of the prime muscles in the upper back that are activated by pull-ups. This muscle attaches from the vertebrae in the thorax and lumbar regions to the iliac crest of the hipbone. The distal attachment of this muscle extends all the way to the humerus bone near the shoulder. Together, the muscle fibers of the latissimus dorsi adduct the humerus (bring the arm toward the center of the body) and extend the humerus (pull the arm backward). The upper fibers of the latissimus dorsi muscle are most completely activated when your hands begin above shoulder height and they are pulled toward the armpits (axilla) during the pull-up exercise. The teres major muscle begins on the lowest part (inferior angle) of the scapula (shoulder blade), but it attaches to the humerus bone of the upper arm. It assists in arm extension and adduction of the arm at the shoulder joint.

It may surprise you that the pectoralis major muscle has a role in pull-ups. This fan-shaped muscle covers the upper (superior) part of the chest. The sternocostal head attaches from the manubrium (the top portion of the sternum or breastbone), and the upper six ribs and converge on a groove near the head of the humerus. The pectoralis major adducts the humerus (draws the arm toward the midline of the body) and when the arms are over the head (as in the start of pull-ups), the sternocostal head of the pectoralis muscle helps extend the arms. Nevertheless, it is most active at the beginning of the pull-ups and it has less of a role as the bar gets close to the chest. 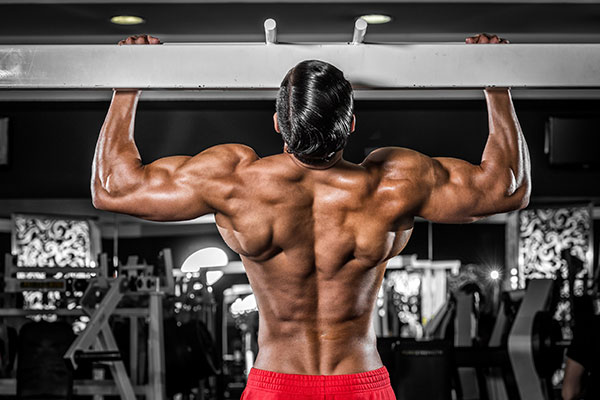 Usually, it’s a good idea to begin with lat bar pull-downs before progressing to medium grip pull-ups. However, once you have the base, pull-ups can be an excellent all-around exercise as a latissimus, biceps/brachialis and chest builder, and can be done wherever there is a bar, a tree branch or even a doorjamb in a hotel room if you are traveling or at home.

2. If possible, stand on a box or bench so that the bar begins at your chest rather than at your chin. The use of wrist straps is recommended for those who have weak forearm strength (weak grip strength), and/or anyone who finds that his arm flexors fatigue before his back.

3. Step off the box or bench, bend your knees (so your feet do not touch the bench or box) and then slowly (three to five seconds) lower yourself until your upper back is completely stretched at the bottom position. Allow a two-second stretch at the bottom before starting upward. This will result in lengthening of the latissimus and teres major muscles before the contraction, and will therefore increase activation of the muscle throughout the next part of the movement.

4. Pull yourself up until the bar is at the upper part of your chest (just below your chin). Attempt to arch your upper back and get your body as high as possible to ensure a complete contraction of the upper and intermediate back muscles (i.e., trapezius and small scapular muscles).

The pull upward extends the humerus bone and activates the latissimus dorsi, teres major and part of the pectoralis and deltoid muscles. Your elbows, however, must flex so the biceps brachii and brachailis muscles are activated. Furthermore, your arm must be adducted at the shoulder joint so all the muscles described above, including the pectoralis fibers, contract.

If you choose a wide grip instead of a medium grip, you will reduce the range of motion that’s produced by the humerus of the upper arm and this will decrease the extent of muscle shortening, but increase the activation of the teres major. Conversely, the lower fibers of the latissimus dorsi muscle should be in a better angle for activation if the grip is narrow. A medium grip activates all regions of the back effectively and this should be the preferred grip for most people.

If you want to turn the intensity up a notch, try adding a few forced repetitions to your set of pull-ups. For example, if you have your box or bench below the chin bar, you can use it to help you when the set gets impossible to complete. Instead of having your knees bent to prevent contacting the bench, extend your knees and push off the box with your feet to assist you in the upward movement (but only after you have exhausted your back strength under the first part of the exercise). Always control the downward stretch.

After a couple of months of intensive pull-ups, you will likely need additional resistance (a belt with a chain for attaching a plate is ideal for this purpose). You will feel the stamina, strength, thickness and width of your upper back, arms and chest begin to take on previously unseen dimensions in only a few months of consistent effort. Remember, the upper back consists of a lot of complex muscles, so it’s critical to work hard enough to stimulate all of them. Compound exercises that activate many muscles are never easy, but then, what else would you expect from the ultimate upper body exercise?

8. Singer RN. The effects of palms-in vs. palms-out pull-ups training on isometric strength of forearm flexors and extensors. Am Correct Ther J 24: 61-63, 1970.