Skip to content
FitnessRX for Men > Training > Workout Tips > Should You Bulk, Cut or Recomp?
Share This!

“Should I bulk or cut” used to be the most popular question among new and even intermediate lifters, but now there’s a new strategy everyone’s arguing over: the “recomp,” or body recomposition. For decades bodybuilders have alternated long periods of slow and steady mass gaining with short periods of cutting for contest prep, but some think there’s a better way. Instead of wavering between these two modes, some lifters think they can pull off significant fat loss and muscle gain in one fell swoop, transforming undersized and overfat physiques into the bodies they desire.

So, is recomping really possible? Just as importantly, is it an optimal strategy for the average bodybuilder? We can certainly name a few high-profile pros who actually GROW into their competitions, getting progressively bigger and leaner – but professional bodybuilders are exceptions to the rules. If you’re someone with average genetics, here are a few questions you should ask yourself when you’re deciding whether to recomp or bulk and cut. 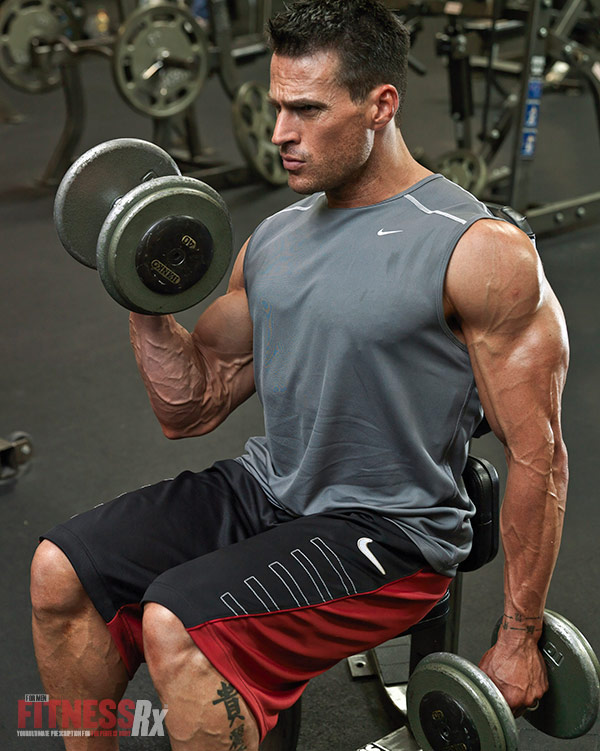 Are You a Newbie?

This is by FAR the most important factor when it comes to pulling off a true recomp. When someone who’s never touched a weight first starts training hard – even if he’s doing all sorts of things wrong – his body can go through some pretty incredible changes. The new stimulus of heavy training forces the body to grow new muscle tissue, and any halfway decent diet will usually lead to significant fat loss, especially in someone who’s skinny-fat or just plain fat to begin with. These are those coveted “newbie gains” that everyone wishes they could recapture once they finally learn to eat and train properly.

If that’s not you, however, you’re going to have a much more difficult time gaining muscle and losing fat simultaneously. Even after just a year or two of dedicated training, your body becomes accustomed to heavy lifting, and you’ll really need to pound the food AND the weights to keep getting bigger. Of course, eating a caloric surplusisn’t going to help you burn fat, and you’ll need to go in the opposite direction diet-wise if you want to get lean.

What are Your Stats?

Your current condition will also play a huge role in determining the possibility of a recomp. If you’re chubby with a lot of muscle on your frame, you’re almost certainly going to have to diet down to lose a significant amount of fat. Likewise, if you’re fairly lean but still too skinny, you’re going to have to slam the food to get big! Sorry guys, but if you want to accomplish fat loss or muscle gain to a significant degree, you’re probably going to have to focus on one at a time.

On the other hand, if you’re still kind of skinny-fat – too thin to be considered “big,” but too fat to be considered “lean,” you may be able to improve both size and conditioning at the same time. Make no mistake, though, you’re not going to go from 150 pounds at 20 percent body fat to 200 pounds at 8 percent in one go. A more realistic goal would be to lose a little bit of fat and gain a little bit of muscle, so that you look better and feel more comfortable in your own skin. Once you’re not so skinny-fat anymore, you’re going to have to pick one goal or the other and see it through to the end.

How Dedicated Are You?

Does dedication really trump talent and genetics? Unfortunately no, at least not in bodybuilding. Some guys have incredible genetics that allow them to pull off amazing physique changes in record time, while others have bodies that only seem to want to gain fat and lose muscle.

That being said, if your genetics are at least average, your dedication will play a huge role in your ability to pull off a recomp. In order to gain muscle and lose fat in the same time period, you’ll have to be unbelievably on-point with your training, nutrition and rest. Your workouts will need to be tailored to your goals with specifics amounts of volume, heavy lifting and even brutal depletion workouts. Likewise, your diet will have to contain exact amounts of each macronutrient, and your nutrient timing around workouts, waking and bedtime will need to be perfect. Basically, you’ll need to optimize every moment of your day to take advantage of your body’s most powerful fat-burning and muscle-building hormonal responses. Do you have what it takes?

What are Your Long-Term Goals?

Aside from the logistics of each option, consider your long-term goals. Do you just need to get a little bit leaner and a little bit bigger to reach your ideal physique? If so, a recomp may be the best option, even if it takes a year or more. It may not be the most optimal way to reach your goals, but it’ll allow you to avoid the discomfort of an all-out bulk or cut.

On the other hand, if your long-term goal is to be MUCH more muscular than you are now, a recomp is almost certainly NOT the way to go! It’s hard enough to build muscle when you’re pounding the food and hitting the weights with plenty of fuel in the tank. Why would you make things even more difficult on yourself by attempting to get leaner at the same time? Cutting might suck, particularly if you’re a former fatty, but you’ll have to bite the bullet and do it at some point. If you’ve got 10, 20, or even 30 or more pounds of muscle left to gain, get lean first so you can really attack your main goal with everything you’ve got.

What is Most Efficient?

It may sound like I’m not the biggest fan of the recomp – and I’m not! Unless you’re a newbie or you’re using large amounts of performance-enhancing drugs, gaining muscle and losing fat at the same time is just not a good way to approach things. While a few guys can pull it off – particularly those who are genetically gifted – most just end up spinning their wheels for months or even years. You’ve probably seen a few of them in the gym, and you may even be one yourself. These perpetual recompers are always wavering between bulking and cutting, never dedicating enough time and energy to one or the other to make significant progress in either direction. Don’t let that be you!

Make no mistake, though, I don’t advocated “bulking up,” either! In my opinion, the most efficient way to build a big, lean physique is to diet down first – not until you’re shredded to the bone, but until you’re at a comfortable level of body fat that gives you some wiggle room to gain a little extra. Then, you gradually gain muscle, making mostly lean gains, and you stick with that approach for a few solid years. Sure, you can take a couple of months to slim down for the beach now and again, but you spend the vast majority of each year gaining lean, quality muscle. THAT is the way to reach your ideal physique in the least amount of time!

Photo on this page: By Per Bernal

Justin Woltering is a distinguished Fitness Expert, Author, and Sponsored Athlete. He is also a top cover model who has helped thousands of skinny guys transform their physiques with his exclusive books, videos, articles, and training tips.