There may be times when you can’t hit the gym, but that doesn’t mean you can’t get a solid upper-body pump. Exercises like close-grip push-ups give you a great pump and fatigue your muscles almost as much as if you had been to the gym. The close-grip push-up is one exercise with the potential to generate a massive pump in the triceps, with decent carry-over for the anterior deltoids, chest and even a bit of the scapular muscles of the back. This exercise is an intense way to engage your triceps when the heavy iron isn’t around.

If you simply don’t have time to get to a gym and might be forced to skip the occasional workout, then you should consider this triceps shocker. It’s also a great way to get a quick pump in your upper body before stepping out. Either way, this rather basic exercise can have some amazing effects that will quickly gorge your triceps with blood and make them feel like they’ve just completed their usual session at the gym.

Close-grip push-ups activate the serratus anterior, upper trapezius and pectoralis muscles along with a number of shoulder and rotator cuff muscles, but it’s the triceps brachii muscles that really get torched in this exercise. Hand position on this exercise is important because if the hands are shoulder-width apart, the force at the elbow is up to 45 percent of bodyweight, but the force increases significantly (and involves more triceps work) with the hands closer together (up to 70 percent of bodyweight with a close-grip spacing).

The anterior fibers from the deltoid muscle are activated with each push upward. These muscle fibers begin along the lateral part of the clavicle bone. The fibers from this region of the deltoid insert on the proximal (closer to the head) and upper anterior (front) regions of the humerus bone. They cover the insertion of the pectoralis muscle as it also attaches to the humerus bone of the upper arm.

The large, fan-shaped sternocostal head of the pectoralis major muscle attaches along the lateral edge of the sternum and the upper-six ribs. Although all of the fibers are activated by close-grip push-ups, the fibers closest to the sternum are most directly and constantly activated. The pectoralis major adducts the humerus (moves the arm toward the midline of the body), so this muscle is active to position your arms into the close hand spacing. The fibers of this muscle also flex the humerus (move the humerus bone of the upper arm anteriorly) as you push your upper body up from the floor.

The subscapularis muscle is a deep, rotator cuff muscle of the shoulder. It’s a thick, triangular-shaped muscle that begins and lies on the anterior surface of the scapula (closest to the ribs). It forms part of the armpit (axilla) and crosses the anterior part of the shoulder joint where it attaches to the humerus near its head. This muscle is a strong medial rotator of the humerus. It also helps hold the humeral head in the glenoid cavity during all phases of the push-ups.

The serratus anterior muscle is a very large muscle overlaying the lateral part of the rib cage. Its fibers look like ropes lying just above the attachments of the latissimus muscle fibers on the lateral side of the ribs. When the serratus muscles have been pumped by close-grip push-ups, these muscle bundles begin to live up to their name, which in Latin means “saw-toothed.” The fibers of the serratus anterior muscle attach to the first eight ribs and then run posteriorly along the lateral side of the thorax. The other end is attached along the medial border of the scapula (shoulder blade). This muscle pulls the scapula forward (protraction) and holds it against the thoracic wall. It stabilizes the scapula for pushing, and the serratus anterior acts as an anchor so other muscles can use the scapula as if it were a fixed bone (even though it’s a free-floating bone). 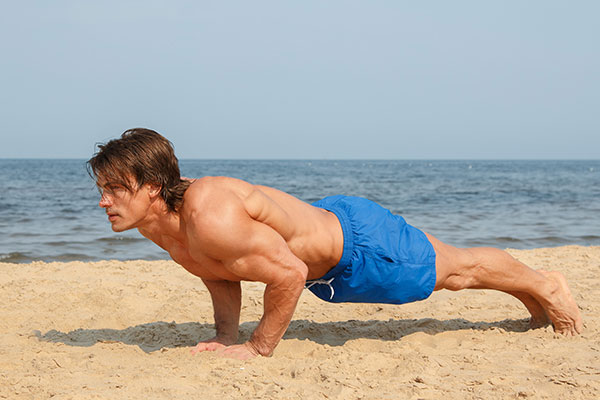 1. Position your body facedown (prone) with your feet close together. If you really want to turn up the heat on your triceps, place your feet on an elevated (high) bench, chair or even the bed.

2. Place your hands together, with your forefinger and thumbs forming a heart shape. You can spread your fingers if you feel unstable, as this will increase the base and give you a little extra support.

3. Start with your elbows flexed (bent) and your chest on the floor. Rise up so your bodyweight is distributed between your toes and your two hands.

4. Keep your knees and body straight and push upward by straightening your elbows. Do this quickly (in about one second).

5. Don’t rest at the top with your elbows straight; slowly lower your chest toward the floor (in about three seconds). Your elbows should point backward as you lower your body.

6. When your chest touches your hands, start the upward thrust. Continue until your set is done (e.g., 30 reps). Rest 30 seconds, and then start again for a great pump.

A wider hand placement will direct a greater activation and stretch to the lateral fibers of the sternoclavicular portion of the pectoralis muscle and away from the triceps. However, if your hands are closer together (especially if they’re touching), the triceps brachii will feel like they’re on fire and you’ll also activate the inner fibers of the pectoralis next to the sternum. If you’ve had a wrist injury, you might want to stay away from this exercise until your wrists heal completely.

This exercise is the paramount exercise for the perfect triceps pump.