When it comes to building bigger arms, training triceps is key: the triceps comprise about two-thirds of the muscle in your arm, and are the largest muscle on the back of your upper arm. Well-developed triceps will provide girth to the upper arm and give you bigger looking arms. Activation of the triceps muscle occurs during forearm extension (straightening the elbow joint). One of the best triceps exercises is rope extensions, which activate the entire triceps, and preferentially activates the outer (lateral) part of the triceps muscle. This exercise will provide constant tension and improve both the strength and stamina of the fibers of your posterior arm.

The long head of the triceps brachii (often referred to as the “inner head”) begins on the scapula (shoulder blade), just inferior to (below) the head of the humerus at the shoulder joint. It attaches to the olecranon via the common triceps tendon. Because this muscle belly crosses the shoulder joint posteriorly, the arm should be moved posteriorly into shoulder extension (i.e., arms and elbows back) to fully activate this muscle head.

The triceps muscle also plays an important role in almost every sport and it’s critical to your success, aside from its central role in developing big arms. For example, if you have ever played the position of a football lineman even in a non-contact game, your triceps muscles, along with your chest and shoulders, provided you with the necessary thrust to push your defensive opponent away from the quarterback. The triceps is as important a factor in successfully throwing a football, cross-country skiing, making an overhead serve or a backhand stroke in tennis, as it is to making a throw to home plate. It’s not that your biceps are along only for moral support, but the triceps muscles are critically important for success. 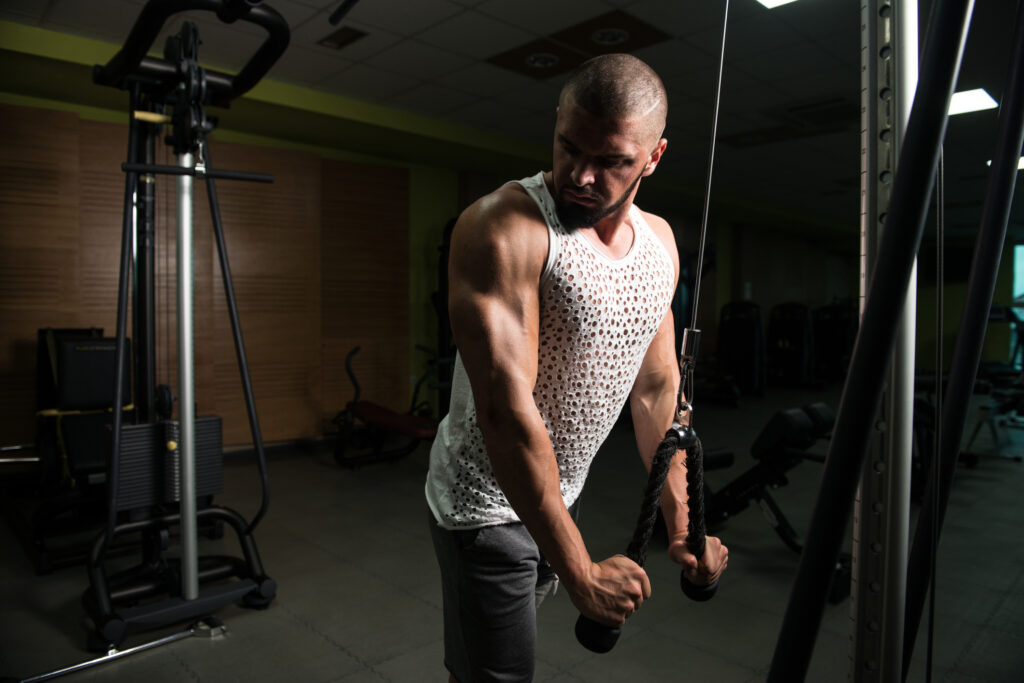 1. Attach a rope to a hook on the cable of a pull-down machine or upper pulley station. Place your hands on the rope so they’re semi-pronated and no more than three to four inches apart. Your little fingers will be close to the knots on the rope and angled down toward the floor (the angle should be about 45 degrees) and your palms and thumbs will be angled upward. Bring your arms forward (shoulder flexion) so the back part of your elbows makes a line that sits just in front of your lower ribs.

2. Your elbows will begin with a 90-degree (or less) bend. Keep your elbows pointing toward the floor and your upper arms close to the sides of your body.

3. Press the weight toward the floor (extending your elbow joint), but stop just before your elbow is fully straight. The press downward (extension) should be done in a controlled, but forceful manner (about two seconds from the starting position to the near lockout).

4. As you reach the position where your elbow is almost straight, twist the inside parts of your hand (thumb side) downward, then out, so your little fingers rotate upward and the backs of your hands move closer to each other. Your elbows will move away from your sides a few inches to permit you to get your little fingers as high as possible while your elbows straighten.

5. At the bottom position with your elbow joints almost straight, tense your triceps muscles isometrically for a three-second count. This will really start to burn if you are not accustomed to it, so you may want to start with two-second contractions. If your hands contact your thighs on the extension, your elbows and arms are positioned too far posteriorly and should be moved forward even more on your next repetition.

6. The eccentric phase of the exercise is when you are returning the weight to the starting position. During this phase, the muscle is lengthening under tension. The elbow joint will move from a near straight to a flexed position (the beginning point should be with elbows bent to less than 90 degrees) as you control the lowering of the weight toward the weight stack. The eccentric phase should be about twice as long as the upward (concentric, shortening) phase of the lift. Take a full three to four seconds to reach the starting position with your hands at eye level. As you are lowering the weight, reverse your hand movements so your little fingers move from a rotated upward to a semi-pronated position pointing downward.

7. The lateral head is under tension from start to finish, but you should not rest more than a second before starting the next repetition.

8. You might not be able to complete the full extension on the final repetitions of the last set without help of a partner. If you prefer to train alone, you can do three or four partial repetitions, which will continue to contract the muscle fibers well into the fatigue zone.

The deltoid, pectoralis and rotator cuff muscles will contract during rope triceps extensions, but primarily as stabilizers. However, if you “cheat” and lean into the pushdown, your shoulder and chest muscles will become much more active.

Rope triceps extensions are primarily designed to stress the lateral (outer) head of the triceps, but the long (inner) head and medial heads will be active as well. The thick, long head of the inner triceps will not be particularly stretched and although active, it will be unloaded and not contribute as strongly as the lateral head to the rope triceps extensions. If the long head of your triceps is particularly weak, you might wish to choose another exercise to preferentially improve it (e.g., dumbbell French presses or lying triceps extensions).

The rope is much more difficult than a V-bar or a straight bar for the extensions. This is because the rope will permit you to turn your little fingers upward toward the ceiling as you roll the index finger side of your hands together and down toward the floor during the last two-thirds of each extension. This change will elevate your elbows out from your sides and further activate the lateral fibers in the triceps muscle near the elbow. Talk about a major burn! For those who cannot stand the heat, it’s time to move back from the furnace and take a water break. However, for the athlete who is strong of heart, the formerly flat lateral aspect of the posterior arm will be slowly pounded into thick, imposing triceps. In addition, the rope triceps extensions will provide greater strength and stamina, so the push-offs or arm extensions accomplished in your favorite sport will knock your ball out of the park, and you into the winner’s circle.