When you think about having big, muscular arms, you probably automatically start conjuring up images of jagged peaked biceps like those owned by The Terminator, Arnold Schwarzenegger. The biceps may garner all the glory as the show muscle of the upper arm, but it pales in significance to the triceps due to simple mathematics. The triceps make up a full 66 percent of the upper arm, making them a muscle you would be foolish to ignore if better-developed arms are what you crave. Additionally, the triceps are key players in big compound lifts like the bench press and military press, so making them bigger and stronger will also help you build a more powerful chest and shoulders. Interested yet? Here are the best exercises for building up those meaty horseshoes so you can get started on making those short sleeves tighter.

The primary function of the triceps is to extend or straighten the arm. The most basic exercise and one that works this function very effectively is the lying barbell extension, also known in various quarters as French presses or skull-crushers. The term skull-crushers sounds a bit frightening, but it is a fairly accurate description of what could happen if you let the bar slip from your grasp. Usually this exercise is done on a flat bench, though MRI studies have conclusively shown that using a decline bench instead results in greater activation of the total triceps mass. The upper arms are positioned perpendicular to the floor with the elbows pointing straight up. The bar is lowered to a point just above your eyebrows and then extended back up. Most men find that the cambered shape of an EZ-curl bar feels more natural and causes less wrist strain as opposed to a straight bar.

Another popular extension movement is the overhead dumbbell version, performed with either one or two arms at a time. When using one arm, the goal is to keep that arm close to your head as you lower the dumbbell toward the opposite shoulder and then straighten it. When using two arms, a heavier dumbbell can be handled, but the motion is slightly different. Your forearms should move down behind your head to a point in back of you, and the dumbbell is lowered until your hands are just below the top of your head. Due to the heavy weights, a spotter is useful to hand the dumbbell to you and take it away at the end of the set.

Many different extension movements can be done at a cable station. A wide variety of grip attachments can be found at most gyms, including straight bars, cambered bars, V-shaped bars, a single stirrup, and the dual rope. You can face the weight stack and do the pushdown in standard style, or lean away from it and extend over your head. The major advantage with all cable movements for the triceps is the continuous tension provided along the entire range of motion.

Another popular dumbbell movement for the triceps is the kickback. The stance looks nearly identical to that of the one-arm dumbbell row for the back, except that the upper arm bone is held straight out in back of you. Your elbow should point directly in back of you, or even perhaps angled up a bit toward the ceiling. The motion from there is simply an extension of the arm with the elbow kept stationary to avoid any swinging. This exercise can also be done, and more effectively I might add, using a rope attachment and the low cable pulley inside a cable crossover station.

Now we get into the compound movements, which many consider the true mass and thickness builders. Dips are an excellent way to overload the triceps with a great deal of resistance. At the minimum, you are using your full bodyweight, and as you become stronger you should be able to hang additional weight off a belt. One of the first men in history to bench press 500 pounds back in the 1950s was a bodybuilder named Marvin Eder. Only 195 pounds himself, another strength feat he was renowned for was doing dips with 400 pounds in plates attached to him. Needless to say he had some of the very best triceps of his era. Dips can be done on standard dipping bars, or between two benches with the hands in back of you, commonly referred to as “bench dips.” There are also many machines that mimic the dip movement that are worth trying.

Like the dip, the close-grip bench press also relies on some chest and front deltoid power to move greater amounts of weight, and thus subjects the triceps to maximum loads. The key to bringing the triceps into the starring role is the close grip, usually with the hands 8-10 inches apart, and keeping the elbows close to the body and moving down toward the ground as you lower. Don’t expect to handle the same weight as you would on a regular bench press, because the larger chest muscles are not able to do as much of the work. You may want to consider wrist wraps for extra support, as the close grip can often cause pain, particularly to men with smaller wrists.

During isolated extension movements for the triceps, involvement of the pectorals and anterior deltoids is rarely an issue. However, when you perform compound movements such as dips or close-grip bench presses, it’s easy to let those larger muscle groups take some or most of the work away from the tri’s. The simplest method to avoid this is to keep the elbows tucked in close to your torso and never let them flare out and away. This will put the chest and shoulders at a mechanical disadvantage so that the triceps are in a more favorable position to contract. The biggest indicator of whether or not you are doing this successfully is where you feel the exercise working, so pay close attention and adjust yourself accordingly.

Because the triceps are involved in all pressing movements for the chest and shoulders such as bench presses and the military press, special care must be taken to arrange your triceps training for peak effectiveness. For instance, you don’t want to train your triceps either the day before or after chest or shoulders. An easy solution is to either pair them up with chest or shoulders. Or, work chest and shoulders together and dedicate a separate day strictly to arm training at some other point in your training week.

The number one mistake lifters make time and again with extension movements is to let the elbows move back and forth as they extend the arm. Doing this robs the triceps muscle of the continuous tension it requires to grow. For example, in the lying triceps extension with a bar, the elbows should point straight up at the ceiling without the slightest bit of motion throughout the entire set. If you can’t do this, reduce the amount of resistance until you can, so that you ensure that your triceps are working as hard as they should.

As we said, the triceps already get a lot of work from shoulder and chest pressing. In fact, there have actually been quite a few men over the years that built impressive triceps without actually ever training them directly. How this applies to you is that you need to be conscious of how much direct isolation work you do for triceps on top of this. The triceps are a relatively small muscle group and as such do not require nor can they benefit from the type of volume you would afford larger muscle groups such as the back or legs. For most men, 9-12 work sets once a week is ideal for stimulating gains while still allowing for full recovery and repair.

With all muscles, the real key to growth is learning to be not just someone who lifts weights, but someone who has mastered the art of training a muscle. There is a world of difference. A “weightlifter” is merely concerned with moving a bar or pair of dumbbells from point A to point B. He will often become quite strong, yet his muscular development may not be much greater than the average guy in the gym. The “muscle trainer” concentrates instead on feeling the muscle work throughout every inch of the rep, think in terms of flexing (contracting) it and then stretching (elongating) it. The muscle trainer usually performs his reps much slower, and you can always see the muscle he is working because it is prominently doing its job. If you can’t do this, you probably need to use less weight. 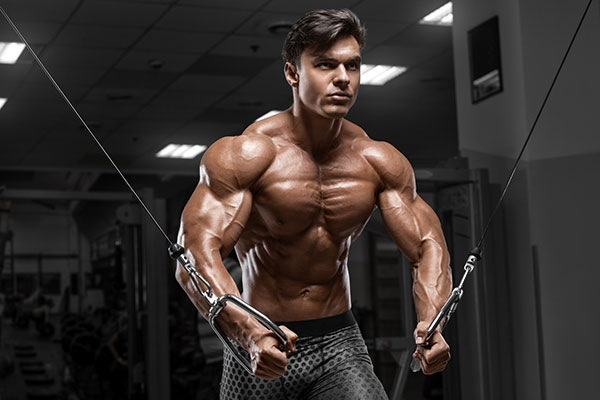