Roman gladiators have been portrayed on the big screen by some of largest chest structures that Hollywood could produce. Even a few real-life strongmen have dawned the Roman garbs and mounted a chariot or two to fulfill this fantasy role. In the movies, a barreled thick chest of a gladiator is often covered with thick metal plating, so that the chest appears to be invincible in battle. However, a serious weightlifter cannot hide behind a gladiator’s armor, so his chest must be thick and square from the bottom of the ribcage to the top of the clavicle. The fibers of the pectoralis of the chest must have thickness along the sternum and not just be thick along the lateral edge of this muscle. A well-trained, thick chest should scream power and command attention, even if you are away from the gym and fully clothed. Does yours?

For the most part, massive slabs can be added to your chest with a lot less effort than that which you must expend in thigh and back muscles. It is a bit more difficult to push the thickness along the inner side of your sternum, but certainly, this in an achievable goal. The flat bench press is pretty good at activating a wide range of muscle mass, but it is particularly good at stressing the most lateral parts of the chest. However, a small change to the bench press can turn the focus from the outside to the inside of the chest. That simply is taking a closer grip on the barbell for your bench presses. Close-grip benches can be equally brutal for both the triceps. As you approach your last set, this exercise can make your posterior arm and the medial parts of the pectoralis major of your chest feel like you are driving knives through these muscle bellies. Perhaps not a pleasant feeling, but definitely a great result will be in store if you stick it out.

The pectoralis major muscle is shaped like a fan, which spreads across the entire chest to the humerus bone of the upper arm. It attaches to and moves the arm through the shoulder (glenohumeral) joint. The pectoralis major muscle has two heads. The clavicular head lies along the anterior lower surface of the clavicle (collarbone). The sternocostal head of the pectoralis major muscle begins on the manubrium (the top portion of the sternum), the upper six costal cartilages (cartilages at the ends of the ribs that attach to the sternum). It also attaches to the tendon-like portion of the superior part of the external oblique muscle (a lateral muscle of the abdominal wall). The clavicular and sternocostal heads converge on a groove near the head of the humerus (intertubercular groove) near the shoulder joint. The sternocostal head is preferentially activated by close-grip bench presses.

Both heads of the pectoralis major muscle adduct the humerus bone (draws the arm toward the midline of the body) and they medially rotate the humerus at the shoulder joint. They also flex the humerus bone by moving the upper arm anteriorly (or toward the front of the body), and this is the major function achieved in a bench press. By moving the hands close together, the arms are adducted and the inner parts of the pectoralis muscles are activated most strongly in this hand position.

The triceps are also hammered quite intensely with close-grip bench presses. As its name implies, the triceps has three parts (tri = three) or heads (ceps = heads). The fibers in all three muscle heads taper to attach to a common triceps tendon that crosses the elbow joint to attach to the olecrenon on the ulna bone of the forearm. Therefore, contraction of the triceps brachii muscle primarily causes extension of the forearm at the elbow (straightens the elbow joint). Some people have a short triceps tendon and the triceps muscle belly appears to extend all the way to the elbow. Others have a relatively long triceps tendon, which gives them a more “peaked” triceps, but a short muscle belly. The lateral head of triceps brachii creates the lateral part of the “U” in the horseshoe of the triceps. Its fibers run from a small vertical section of bone on the posterior part of the humerus (upper arm bone), starting about two-thirds of the way toward the shoulder joint and stopping short of the shoulder joint. The long head of the triceps brachii (the “inner head” in gym lingo) begins on the scapula (shoulder blade) just inferior to (below) the head of the humerus at the shoulder joint. Because this muscle belly crosses the shoulder joint posteriorly, the arm should be moved posteriorly into shoulder extension (i.e., arms and elbows back) to fully activate this muscle head. This happens very well in the down position of close-grip bench presses. The medial head of the triceps brachii lies deeper and between the other two heads of the triceps. It encompasses two-thirds of the upper and posterior part of the humerus bone. It is a very thick muscle further up the arm toward the shoulder and provides enormous depth to the curved “U” part of this horseshoe; however, it has a shorter muscle belly than the other heads and this gives the appearance of the hollowed-out center part of the horseshoe near the elbow. 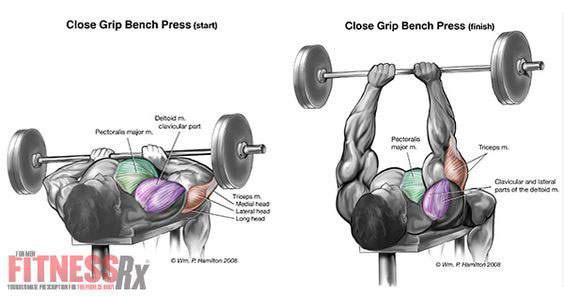 1. Place an Olympic-style barbell on the weight stand of a flat bench. Load the barbell so that you can get 10-12 repetitions. You should warm up the shoulders and chest with a light set or two first before hitting the heavy stuff.

2. Lie supine on the bench. Place your hands on the bar with a pronated grip (palms facing to the ceiling and away from your face). Grab the barbell with your hands a little narrower than shoulder width. This will be about 8-12 inches apart for most people. Some people prefer a thumbless grip. This does not affect your chest any differently, but you will have to be a bit more careful with balancing the bar with a thumbless grip.

3. Lift the weight from off of the stands by extending (straightening) the elbows. A training partner can be used to lift the bar for you so it is over your shoulders. Make sure that you are in control of the weight in this position before going to the next step.

4. Slowly lower the bar in a slight arch, so that the bar moves from closer to your feet at the top and closer (slightly), to your chin at the bottom. The weight should move from over the shoulders to a position where it just barely makes contact with your chest at the nipple (the fifth intercostal space). You should inhale as the weight is lowered to the chest in a slow and controlled fashion.

5. Without making a strong contact with your ribcage (and never bouncing the bar on your chest), immediately explode upward with the bar. Move it in a slight arch toward your head so that the weight is returned to a position immediately under the shoulder joint. Exhale during the ascent of the barbell. Make sure that your training partner hangs around until the end of the set in case you get stuck with the bar across your chest.

The close-grip bench press clearly involves more than just chest muscles. It strongly activates the anterior fibers of the deltoid and the triceps brachii as the weight is moved upward. The intercostal muscles are active during the forceful inhaling and exhaling. The serratus anterior is active to stabilize and protract the scapula during the lift upward (flexion of the humerus at the shoulder). Even the latissimus dorsi and teres major muscles of the upper back are active, both as stabilizers for the shoulder and when the humerus is extended at the shoulder.

Aside from the safety problems common to all free-weight exercises, any flat bench press, including close-grip benches, can aggravate or induce rotator cuff irritation – especially if you get a little sloppy in your form. That is because these muscles limit movement of the glenohumeral joint posteriorly (and the rotator cuff muscles prevent this posterior location) as the bar is being lowered. Obviously, the greater the resistance and the more times it is done, the more potential irritation is imposed to the rotator cuff muscles. Nevertheless, if your form is excellent, you should be able to benefit from the advantages of the positive effects of close-grip bench presses without tapping into any of the negative potentials.

Neglecting your inner chest is training suicide, and certainly a great body is not complete without fully developed and thick chest muscles. Proper selection of your torso exercises will give you the ability to develop a supercharged and balanced chest, without inducing any injury. Close-grip benches are an outstanding way to pack mass on your triceps while simultaneously packing enough mass on your chest to make any gladiator envious.