Big biceps are often regarded as a barometer for evaluating a guy’s overall condition among non-athletes and athletes alike. Even in extreme settings such as bodybuilding competitions, the biceps are evaluated by the judges in virtually every pose.

Arms come in various sizes and shapes, and each has its unique quality. The shape of the arm and the degree of its peak will be determined to a large extent by how long the muscle belly is relative to the length of the tendon, and how many fibers are packed into the muscle. With the amount of attention we normally give this comparatively “little” muscle (little relative to muscles like quadriceps), everyone should have a great upper arm. The truth, of course, is that great biceps owners have inherited much of their structure and then worked hard to maximize their genetic gifts. But what about the average citizen of this world who was not born with a noteworthy upper arm? Well, there is hope, but the road will not necessarily be easy.

One of the best places to begin developing bigger, thicker biceps is to go back to the basics of training. Even with chromed and specialized machines galore, the barbell curl is still among the best exercises that will fully activate, and add size and density to, your upper arms. The bottom line is that you just can’t beat barbell curls for developing quality biceps mass.

Both heads of the biceps muscle are strong flexors of the forearm. However, because the biciptial tendon is attached to the radius bone, (the most lateral forearm bone), the biceps is also a very strong supinator of the hand (turns the palm toward the ceiling) if the hand begins in a pronated position. This is because when the hand is pronated, the radius sits on top of the ulna. When the biceps muscle contracts, it pulls on the radius, too. It moves back into a position where the radius lies beside, and not on top of, the ulna. This moves the hand from a pronated to a supinated position.

The brachialis muscle lies deep to the biceps brachii. Unlike the biceps, the brachialis takes its origins directly from the humerus bone. It begins on the distal half of the humerus and it inserts on the coronoid process of the ulna. The attachments of the brachialis do not allow supination, but it is a very strong elbow (forearm) flexor. In fact, some researchers attribute 60 to 70 percent of forearm flexion to the strength of the brachialis muscle. Thickening the brachialis is critical to adding overall arm flexor mass. However, just about any exercise is effective at activating this muscle, because it is recruited effectively no matter what the hand or elbow position is in flexion exercises (i.e., curls). 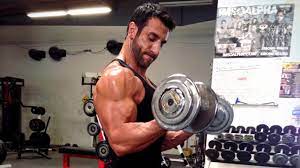 1. Pick up a barbell with a shoulder-width grip. Your hands should be in a supinated position (palms facing upward).

2. Stand in front of a mirror to keep your form perfect. Keep the upper arms (humerus bones) perpendicular to the floor and close to your side.

3. Flex your forearms so your hands move up to your shoulders. Try to feel the biceps and brachialis explode as the weight is moved upward.

4. Slowly extend the elbow joint and lower the weight back toward your thighs.  Keep your upper arms close to the side of your body as the weight is being lowered. Try to make this a controlled descent that takes three to four seconds.

5. Place the weight on the floor or a weight rack when your set is done, rest about 90 seconds, then start your weight upward for your next set.

The tension in the biceps is reduced somewhat at the top position of the barbell curl, when the elbow is fully flexed. One way to increase the muscle activation at this position is to tense the biceps and brachialis voluntarily. Simply squeeze the arm flexors hard for a count of two or three at the top before controlling the descent of the weight. This voluntary effort will provide a superior overload in the fully flexed position, but it will also result in a very intensive and fatiguing exercise. Therefore, add these squeeze repetitions to the sets slowly. Another acceptable way to overload your biceps to push through a few more repetitions at the end of each set is to add some “cheat” curls. When you can no longer get the bar up due to fatigue, you can use hip momentum to mildly swing or “cheat” the weight upward. However, if you do a cheat curl to get the weight up, lower the weight twice as slowly as you would normally. This will take advantage of the eccentric effort and force the muscles to grow thicker and stronger more rapidly than if you did not use the slow eccentric efforts at the end of these sets.

You might try imagining that your biceps are as big as mountains as you are doing each curl upward. Research shows there is something to this mind-muscle link and imagining your goals can help improve your strength, so why not muscle size also?

You will find that basic barbell curls will be a rewarding exercise, as your arms get fuller, thicker and denser. If you are also “squeezing” your arms at the top of each repetition, you’ll find that your ability to control and contract the biceps will be greatly improved.

Adding mass to your upper arms is not easy to do. It’s a slow and sometimes painful process. Nevertheless, no matter where your arms are at this point in time, your arm mass and thickness can be improved, and the best way for this to occur is by returning to the basics of arm training with barbell curls.