Skip to content
FitnessRX for Men > Training > Workout Tips > Build Muscle and Get Ripped With HIIT
Share This!

What’s the secret? Combining high-intensity interval training (aka HIIT) with a lower-carb/low-glycemic index diet, in conjunction with some simple supplementation. Now bear in mind that you shouldn’t do the exact same program all the time. You’ll need to vary it in terms of exercise choice/intensity/duration, diet (food choices, total kcals, etc.) and supplements. Doing the SAME thing over and over again will work to a point; and then it stops working. You need to frequently kick-start your body into acquiring new adaptations. And unfortunately, the better your fitness level is, the harder it is to lose even more body fat. Let’s face it. The reason “The Biggest Loser” contestants can lose so much fat is because they HAVE so much fat. 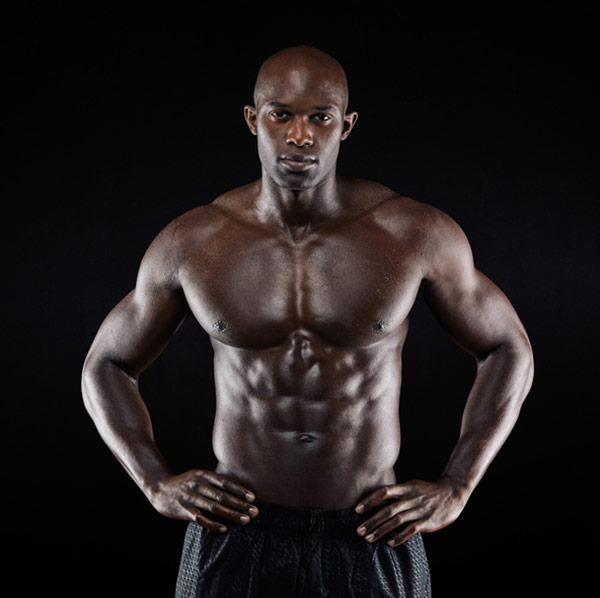 In the never-ending battle of “which diet is best,” you have the low-carb, higher fat, protein variety (e.g., Atkins), the more moderate type (e.g., 40/30/30, Mediterranean) and of course the favorite of many clinicians, the low-fat diet. It wasn’t that long ago when folks who espoused eating fewer carbs were vilified as “purveyors of early death!” I mean, God forbid you tell a diabetic to eat less bread and perhaps more meat. But the beauty of science is in its ability to eventually self-correct. And suffice it to say that the preponderance of evidence points to a lower-carb diet as being the best choice for most individuals when it comes to promoting weight and fat loss.

In perhaps the single best randomized clinical trial, 322 overweight subjects consumed either a low-carb (without caloric restriction), low-fat (with calorie restriction) or the Mediterranean diet over two years. They had pretty darn good adherence to the study diets (85-95% adherence) over the two-year period. And to say the data are fascinating would be like saying the girls in a Victoria’s Secret catalog are merely pretty. The Mediterranean-diet group consumed the largest amounts of dietary fiber and had the highest ratio of monounsaturated to saturated fat. Moreover, the low-carbohydrate group consumed the smallest amount of carbohydrates and the largest amounts of fat, protein and cholesterol and had the highest percentage of participants with detectable urinary ketones. But who lost the most weight? The winner was the low-carb group (-12.10 pounds), followed by the Mediterranean group (-10.12 pounds) and last and certainly least, the low-fat group (-7.26 pounds). To top it off, the low-carb group was told to NOT restrict calories while the other two were. Perhaps the most fascinating result was the fact that cardiovascular risk factors were best in the low-carb group, despite the fact that they consumed the most saturated fat and cholesterol. Wait a minute— doesn’t the American Heart Association (AHA) pound the drumbeat of lowering your saturated fat and cholesterol intake? Makes you wonder if the AHA cares about science or are so forever married to their silly dogma.1 Another study found that a lower-carbohydrate diet was superior to a traditional diet for improving heart disease risk factors.2

Now the problem with losing weight is often the lower metabolic rate following weight loss. This might contribute to weight re-gain. Thus, scientists looked at three diets and how they affected metabolic rate following weight loss. After achieving 10 to 15 percent weight loss, participants then consumed an isocaloric (i.e., same number of calories) low-fat diet (60% of energy from carbohydrate, 20% from fat, 20% from protein; high-glycemic load), low-glycemic index diet (40% from carbohydrate, 40% from fat, and 20% from protein; moderate-glycemic load) and very low-carbohydrate diet (10% from carbohydrate, 60% from fat and 30% from protein; low-glycemic load) in random order, each for four weeks. So this is pretty cool. Every subject did each diet. What happened? They found that resting metabolic rate was highest in the very low-carb group, followed by the low-glycemic index diet, with the low-fat diet coming in dead last. You see a pattern in these studies?3

So here’s the lowdown if your goal is to lose fat:

First, cut out all processed carbohydrates. This includes breads, cereals (yeah, that includes whole grains), pasta and white rice. Make up for these calories by consuming more fruits and vegetables as well as meats (e.g., fish, beef, chicken, etc.) with a touch of added fat (especially fish oil).

I’d suggest that you stay with the lower-carb diet for at least four to six weeks. After you’ve lost a significant amount of fat, go on a “diet holiday” of sorts and consume more a 40:30:30 or Mediterranean style diet (this was the second most effective). This will allow you to train harder (see next section) and further improve your fitness goals. Then resume your periodized diet plan and go back on the lower carb/lower glycemic, higher protein/fat diet. 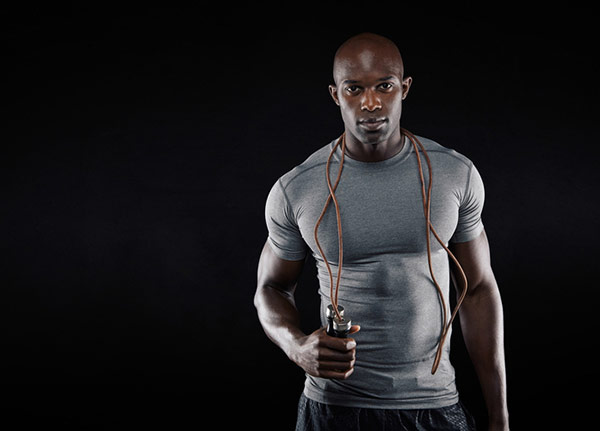 Akin to the battle of the diets, is it better to do steady-state cardio (SSC) or high-intensity interval training (HIIT) if your goal is to burn fat? Suffice it to say that you should probably do both, because doing HIIT all the time is pretty darn hard and might lead to overtraining. But in a pinch, there is no better way to make the best use of your time than by doing HIIT. In one study, scientists found that sprint interval training is a time-efficient alternative to endurance training for increasing skeletal muscle oxidative capacity and improving cardiovascular function.4 One single bout of HIIT can increase insulin sensitivity and fat oxidation in overweight men.5 Another study proved just how potent HIIT can be. In a 12-week study, total body, abdominal, trunk, visceral fat mass and fat-free mass of young overweight males was assessed after performing high-intensity training. Participants were randomly assigned to either an exercise or control group. The intervention group trained three times per week for 20 minutes per session. Aerobic power improved significantly by 15 percent for the exercising group. Exercisers compared to controls lost 4.4 pounds of fat! Abdominal, trunk and visceral fat was also significantly reduced. And on the flip side, they gained lean mass.6 Just one hour of hard training per week proved super effective at changing body composition.

Recently, scientists looked at a variation of HIIT called HIRT, or high-intensity resistance training. They tested the acute effects of HIRT versus traditional resistance training (TT) on resting energy expenditure (REE) and respiratory ratio (RR) at 22 hours post-exercise. RR is a measure of whether you are burning fat versus carbohydrate as a fuel source. In two separate sessions, 17 trained men carried out HIRT and TT protocols. The HIRT technique consisted of three series of 6-RM (doing the maximum amount of weight for six repetitions) followed by a 20-second rest, then the subject lifts the same weight until reaching the point of failure (usually two repetitions) followed by 20 seconds rest, then another two to three repetitions. This sequence counted as one set, then subjects rested two and half minutes before performing a second and third set. The training session lasted approximately 32 minutes (including the warm-up period). TT consisted of eight exercises of four sets of eight-12 repetitions with one to two minutes rest with a total amount of 32 sets. HIRT showed a greater increase in REE 22 hours after training. In fact, HIRT burned 363 more calories. Also, the HIRT group had a lower RR, confirming that they burned more fat too.7 So the evidence is clear that doing it hard and short is better than the longer steady-state approach.

Supplements to Get You Ripped

Some studies suggest that calcium in the diet may increase the loss of body fat. In a recent meta-analysis, “acute high calcium intake increased fat oxidation.”13 One of the more common ingredients used, especially in combination with caffeine, is bitter orange. In an elegant review published in the International Journal of Medical Sciences, scientists examined the entire body of science to see indeed if bitter orange is both safe and effective. They found that in general, bitter orange extract alone (p-synephrine) or in combination with other ingredients such as caffeine, did not produce significant adverse events as an increase in heart rate or blood pressure, or alter electrocardiographic data, serum chemistry, blood cell counts or urinalysis. In fact, modest weight loss was observed with bitter orange extract/p-synephrine-containing products when given for six to 12 weeks.14

Most think of fish oil’s cardio-protective effects or even its potent role as an anti-inflammatory. But did you know there is surprising evidence that it can improve your body composition? In a study published in the Journal of the International Society of Sports Nutrition, scientists studied 44 men and women to determine the effects of supplemental fish oil (FO) on resting metabolic rate (RMR), body composition and cortisol production. Subjects consumed either: 4 g/d of safflower oil (SO); or 4 g/d of FO, supplying 1,600 mg/d eicosapentaenoic acid (EPA) and 800 mg/d docosahexaenoic acid (DHA). All tests were repeated following six weeks of treatment. The FO group lost body fat and gained fat-free mass. So a double whammy. You gain muscle and lose fat. The investigators believed that the drop in salivary cortisol found in the FO group may have played a role in the loss of body fat.15

The complete strategy for getting ripped is like a tricycle. You need the front wheel and two rear wheels to keep it going. Similarly, a plan that includes a proper diet, training and supplementation is ideal for maximizing fat loss.

• Your diet should consist of plenty of unprocessed carbohydrate foods as the base (i.e., eat vegetables till you’re blue in the face and enough fruit to satisfy a primate).
• Limit or eliminate processed carbohydrates (e.g., pasta, breads, cereals, etc.).
• Eat plenty of protein and fish fat.
• Train like you mean it. Doing steady-state is good, but doing HIIT is better. At least twice per week, do some hardcore HIIT.
• Supplement with caffeine, bitter orange extract (p-synephrine) and fish oil.

Jose Antonio, Ph.D., FNSCA, FACSM, FISSN is the CEO of the International Society of Sports Nutrition and a professor at Nova Southeastern University’s Exercise and Sports Science Department in Davie, Florida.