Skip to content
FitnessRX for Men > Training > Workout Tips > Get Bigger and Stronger with Resistance Band Training
Share This!

While resistance bands are most commonly thought of as a tool used for warming up your muscles before lifting or for athletes looking to increase their speed and power on the field, they can actually be used in your program to help increase explosiveness and strength.

Resistance bands have been around for quite some time. Originating as a physical therapy tool to assist people with increasing their strength and mobility, band training has become increasingly popular and continues to remain a trend across the fitness world with both bodybuilders and powerlifters. And there’s good reason for this growing trend. 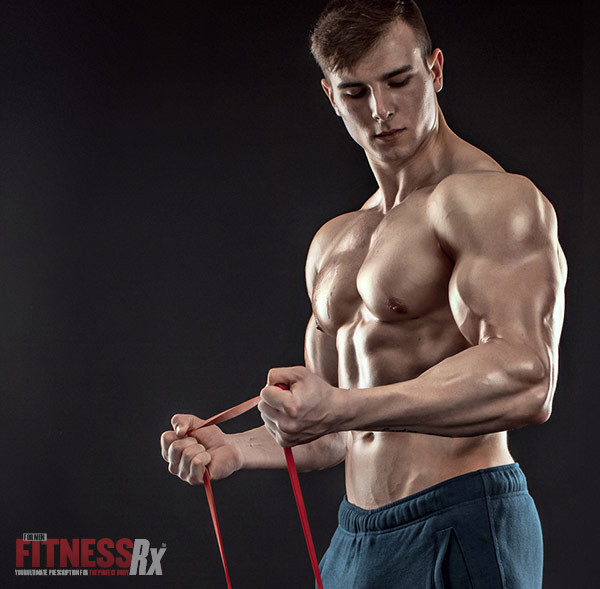 Using resistance bands to put your muscle under a greater amount of tension is a great way to switch up your training and reap the benefits of eccentric style training. Research has shown that when the muscle is lengthened during the eccentric portion of the movement, protein synthesis is increased as compared to the concentric phase1. Scientists have found this increased protein synthesis increase is due a chemical called phosphatidic acid, which is released during the eccentric phase of the movement2.

By increasing focus on the eccentric portion of the movement, you can also push past plateaus. One of the reasons we plateau in our training is because our bodies are no longer able to activate satellite cells – cells located on the outside of the muscle. These satellite cells respond to damage in their vicinity, so during lifting when you are tearing the muscle these satellite cells move to the damaged area. By attaching to the muscle as a response to the damaged muscle these cells transform into muscle fibers, giving you more potential for your muscles to grow3.

BANDS FOR BUILDING MUSCLE AND STRENGTH

The most common and most effective use of resistance bands is through the reverse band method. This method can be effectively used for both hypertrophy training and strength training.
A bodybuilder looking to bring up their chest or quads can use the reverse band method to reduce stress on the muscles and joints while allowing the individual to handle a greater load. By being able to handle more weight you are forcing more fibers within the muscle to work, leading to more fiber recruitment.

Using the squat movement as an example, the load is lightened the most at the bottom of the exercise, taking stress off the hip joints and knees. Reverse band squats also shift more of the weight load to the quads from your posterior chain to allow for more activation and development.

The benefits don’t stop there. Resistance band training has been used by powerlifters all over the world to bring their strength to new levels. Using resistance band training in his own program, Louie Simmons was one of the first coaches to apply bands to strength training. Simmons still holds powerlifting records at over 50 years of age and his training style has been used by hundreds of powerlifters to crush world record lifts year after year.

Bands assist in powerlifting movements by decreasing the load where your leverage in the movement is the poorest, such as the starting positioning of a deadlift. The bands then increase the load at the top of the lift, or lockout.