Most of us think about getting into shape for either a certain time of year, typically summer, or for a specific event like a vacation or class reunion. The concept of being exceptionally lean and tight all year long seems about as realistic as time travel to most of us. But for champion Men’s Physique athlete and fitness model Casey Christopher, having a shredded six-pack all the time is simply a way of life. “As a fitness model, you need to be ready on short notice for photo shoots whenever the opportunities arise,” he explains. “I never stray too far from contest condition.”

Casey maintains a body fat percentile of 7 to 9 percent normally, and will dial that down to human anatomy chart levels of 3 to 4 percent for competitions. This takes meticulous attention to nutrition (see “Casey’s Daily Diet: Making Abs in the Kitchen” in Part I of this training feature), as well as the discipline to eat clean at all times. The 27-year-old carries 203 pounds of ripped, athletic muscle at 5’11”. And as you can see, Casey has the type of physique that just about all of us would love to see looking back at us in the mirror. In particular, his midsection is damn close to perfection. A clear-cut six-pack like Casey’s screams virility and elite physical fitness to all who gaze upon it. 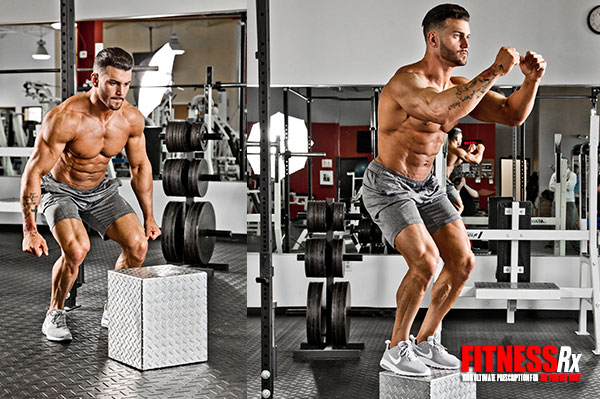 One of Casey’s “secrets” to his fantastic midsection is that he trains his abdominals every day. Though he only does a full 30-minute ab workout once every six days after training his back and biceps, he will do a few sets of ab work every day after he finishes training a muscle group. “Every day, I do something to keep my abs tight,” he says. “I’m not trying to build them, which is why I perform only bodyweight movements, but I always want them to be hard and conditioned.” On the days he does do a full ab workout, these are his favorite movements. He usually does each exercise for three sets of 15-20 reps, a rep range he has personally found to be ideal.

Casey begins in the standard push-up position, prone with his bodyweight supported on his hands and toes. He then alternates bringing his right knee up to touch the outside of his right arm with bringing his left knee up toward his left arm.

This is a movement that requires exceptional core strength. It begins in the push-up position once again, except this time you have your feet elevated behind you on a wall. Maintaining this position for the duration of a 15- to 20-rep set is no easy task, and in and of itself will force you to keep your core tight the entire time. One foot always remains on the wall. Wall mountain climbers are done by bringing the knee of the right leg down and to the outside of the right arm, and then repeating with the left knee. Fifteen to 20 reps for each leg will have your whole midsection on fire!

Hanging leg raises are the go-to movement to target the lower section of the abdominals. Casey begins by jumping up and taking an overhand grip on a pull-up bar. From there, he might raise his legs in a bent position, leading with the knees and drawing them up toward his chest, or do the tougher variation with his legs held straight out. One simple way to make this movement more challenging is to initialize the set with legs held straight until no further reps are possible, and then continue with bent leg “knee raises” to burn out the lower abs.

A few years ago, Casey found that even while using perfectly strict form, standard crunches had become far too easy. Rather than do sets of 100, he experimented and discovered that the level of difficulty could be greatly enhanced with one simple adjustment: keeping his legs flat down on the floor rather than bent, with knees up. “The straight leg crunch puts more emphasis on the entire core, not just the abdominals,” he observes. “There is no way you can cheat and use any type of momentum, either.”

Casey finishes his ab routine with an exercise that encompasses not only the abs, but the obliques and serratus as well. First, he will raise his left leg up to the sky, keeping it perfectly straight. Next, he crunches up and at the same time reaches across his body with his right arm toward that left foot. The process is repeated with his right leg and left arm, which is now one complete rep.

Box jumps aren’t an abdominal or a core movement, but Casey does do them as part of his overall physical conditioning and to burn fat. Usually, he will set a timer on his phone so that he will do continuous jumps for 90 seconds, rest for 30 seconds and repeat until he’s done four rounds. If you have never tried box jumps, you will quickly learn just how demanding they are on the cardiovascular system. Four rounds, as Casey does, will have you feeling like you just ran five miles!

The Role of Cardio

Abdominal training and a 100 percent clean diet are both critical factors in displaying a ripped midsection, but the importance of cardiovascular training can’t be overstated, either. Most of the time, Casey will do 20-30 minutes of cardio after his daily weight-training workout, opting for either the incline treadmill or the stepper, and keeping his heart rate in the range of 150-160 beats per minute after warming up. “I prefer those two machines over others because they don’t just get the heart rate up into the fat-burning zone, they also force you to work the glutes, hams and calves so they all stay tight.” 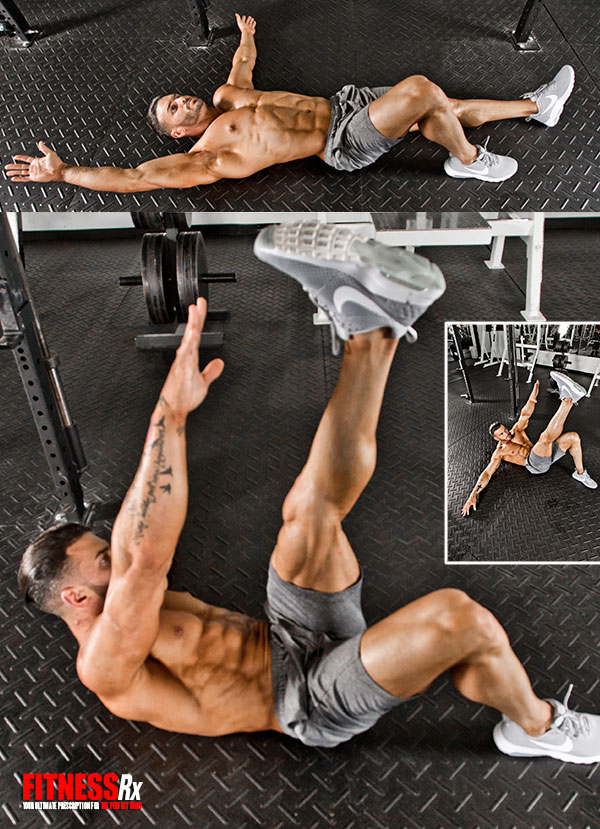 Putting It All Together

A midsection like Casey’s doesn’t just come from ab training, nor is it purely the result of his diet or cardio regimen. All three components must be in place for a synergistic effect to tone and tighten the muscles, and to have extremely low body fat levels so those muscles are clearly defined and delineated. If you want to have a chiseled midsection and a powerful core, take some tips from how this Physique competitor and fitness model fits all those training and nutrition factors into his daily lifestyle.