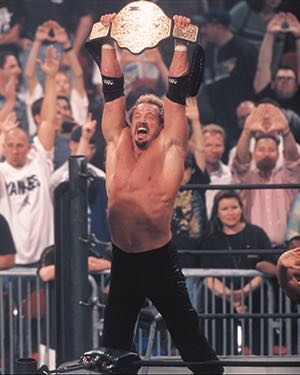 Slumbering up the ramp and back in to the dressing room, the 42-year-old professional wrestler knew that something was definitely wrong. Sure, he had been through a million and one injuries before and had been able to shake those off, but this one felt different. This may be the last one he ever will suffer.

No, this isn’t a script from a Mickey Rourke movie, but rather a true-life scenario in which Diamond Dallas Page actually went through.

“I blew my back out,” the man known as DDP recalls. “Ruptured my L4 and L5 discs. I knew that it was going to be a difficult surgery and thought about everything. I had just signed a multi-million dollar deal (with World Championship Wrestling), but it wasn’t even about the money. I was (finally) living my dream and now it’s gone.”

With a long rehab ahead of him after the surgery, Page faced a situation where he knew the same old remedies were not going to work for him. Been there, done that. He had to come up with something entirely different that would get him back in shape and not tax his already-smashed up body to the extreme.

“THIS AIN’T YOUR MOMMA’S YOGA!”

Creating a program, as he puts it, “out of necessity and desperation,” Page began implementing yoga style stretching with old school calisthenics and DDP Yoga was born. “I had to try this and within three weeks, I began to feel better,” Page explains. “In less than three months, I was back in the ring.”

Even his own employer believed that he was done after the injury and it came as a shock to everyone to see Page climb through the ropes again. Things were going so well for him that Page was given a title shot in April of 1999 at WCW’s Spring Stampede in a four-way match that also included Hulk Hogan, Ric Flair and Sting, with Randy “Macho Man” Savage as the guest referee.

“I hit Flair with the Diamond Cutter (DDP’s finishing move) for the win,” a smiling Page says, “and Savage handing me the title – it doesn’t get any better than that, especially when a few months earlier, I was supposed to be finished.” 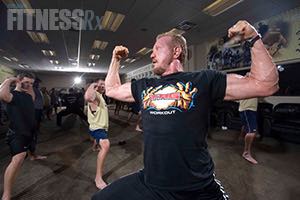 The fact is that Page, 57, could never have imagined himself using a program like this. He was even quoted in the Wall Street Journal saying, “Fuck that…I wouldn’t be caught dead doing yoga.” But – as he warns people – don’t call it yoga. It’s DDP Yoga.

“Regular yoga is all about you,” explains Page. “It has all of that spiritual mumbo jumbo, reach your arms to the heavens. DDP Yoga is more like a team sport. My people want to work out. It’s actually isometrics with dynamic resistance. I do all of this standing still. No other work out on the planet does this.”

When he began putting the routine together, the 6’4”, 228-pounder (who weighed 252 during his wrestling career) had a male target audience in mind. “It was for guys whose bodies were beat up,” he adds, “but women love it, too.”

Perhaps the most publicized pupil of Page’s has been one of his old wrestling buddies, Jake ‘The Snake’ Roberts, whose real life persona was the inspiration for the lead in “The Wrestler,” but had become a much sadder character through the use of alcohol and drugs.

“Jake was a mentor for me back in the day,” says Page with a clear sense of caring. “He believed in me and taught me so much. But he crashed and burned and I gave him money over the years.”

Page offered his assistance again to Roberts, but not in a monetary form that would ultimately be used for more damaging substances, but rather something that would save his life.

“Seven months ago, I told him that I wasn’t going to help him unless he helped himself,” recalls Page. “I wanted him to try my workout and see if he could lose eight to 10 pounds in the first month. He told me, yes,’ but it was just so he could get me off the telephone and go get high. But I sent it to him, anyway.”

Much to the surprise of Page – and probably Roberts, himself – he was able to drop eight pounds off his 305-pound frame in a mere 10 days by just using the diet that Page’s program includes.

“He did that without even working out,” Page exclaims. “I told him that I was coming down there with a camera crew to do a documentary film on him, and to trust me and let me tell his story. He was mad at me, but conceded.”

Page didn’t realize how bad the situation really was until he saw Roberts face-to-face again. His friend needed assistance to even get out of a chair and fell two-thirds of the way down when attempting to get on the floor. Years in the ring had given Roberts bad knees, a bad back and he even required a hip replacement eight years ago that he never rehabbed.

“We did two (DDP Yoga) moves and he had to sit down after only three minutes,” Page says. “But he stuck with it and lost another 15 pounds in six weeks.”

Page then brought Roberts up to his home in Atlanta to continue the program and he lost an additional 60 pounds since then while remaining clean and sober, following a relapse early in the process. “I told him – if you want me to help you, no more booze or drugs.”

When Page and Roberts attended WrestleMania XXIX recently in New Jersey, some of their grappling brethren were very impressed how far Roberts has come.

“We saw ‘Superstar’ Billy Graham and he couldn’t believe his eyes how Jake looked,” Page says proudly. “A lot of the guys are also using DDP Yoga. Chris Jericho had surgery and after using the program for three weeks, he was 85 percent pain free. After two months, it was 100 percent.”

Jerry Brisco, a WWF/WWE legend, is another fan of DDP Yoga. “He’s 66 years old, and told me that he was unable to do a push-up before using my program,” says Page. “Now he said that he’s cracking them out!”

40 current wrestlers on the WWE roster are using DDP Yoga, including the aforementioned Jericho and the 6’3”, 291-pound Ryback. Some alumni include Ted ‘The Million Dollar Man’ DiBiase and Scott Hall, who wrestled under the moniker ‘Razor Ramon’ in his WWF days.

Perhaps the most telling statement from Page was regarding if he does any other form of training besides his own program.

Who would have know back when Page was lying in a hospital bed recovering from that invasive back surgery that he would be in the best shape of his life by ditching the weights?

[EDITOR’S NOTE:] No, this isn’t some kind of sales pitch to help out a guy that I interviewed, but the actual truth. While we were on the phone together, Page told me to do a few different movements just with my hands and arms. I was still seated in my chair at my cubicle here at the Muscular Development home office and – I shit you not – I had a decent pump and a little sweat was forming on my forehead. That’s when I was sold on DDP Yoga.

I didn’t even need to view the video clip on his website about the disabled Persian War veteran Arthur Boorman, but did so out of curiosity after DDP told me about him. It speaks for itself, so I’ll leave it up to you to check it out. 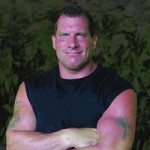